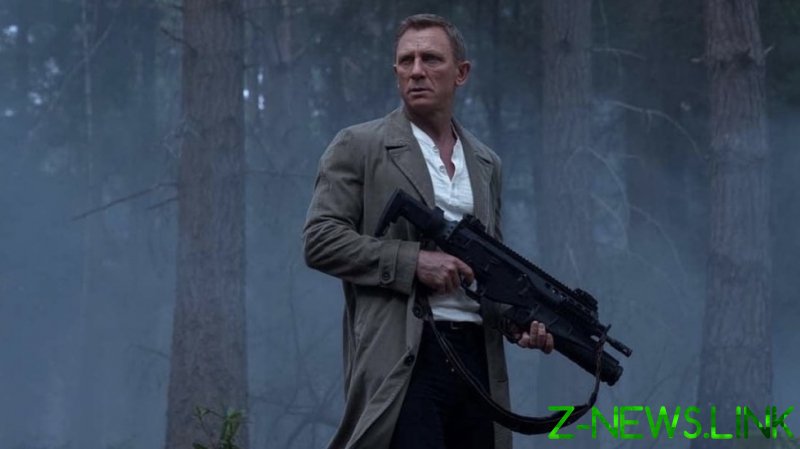 The new James Bond adventure ‘No Time to Die’ features a C-17 aircraft and a naval destroyer, courtesy of the British Ministry of Defence (MOD).  The Royal Air Force and Royal Navy lent their support to the action thriller, in the latest act of government sponsorship of the Bond franchise.

The MOD admitted that it was the Navy destroyer HMS Dragon, stationed in Portsmouth, that was used in ‘No Time to Die’, with one military website reporting, “A Ministry Of Defence source confirmed that the use of Armed Forces equipment in the new Bond film, such as HMS Dragon, formed part of commercial relationships across film and television, that also includes the likes of the BBC’s Top Gear and Disney’s Captain Marvel.”

According to the report, the British military’s PR people wouldn’t confirm how much they were paid for use of their assets in the film, begging the question of whether the ‘No Time to Die’ producers got them for free, or at least at a heavily-subsidised rate.

Documents on the MOD’s process for dealing with what they call ‘Non-News Media Projects’ show that they analyse all requests for support for their potential PR value, and for possible negative portrayals. Their directive states that projects such as ‘No Time to Die’, “are checked through communications staff to ensure there is no obvious potential for a negative outcome and therefore pose a presentational risk.”

When it comes to the question of who pays for the support, the MOD’s documents say that charges can be waived if a project is considered sufficiently positive PR for the department. If your movie or TV episode flatters the MOD’s desired public image, then they prefer to give you the planes and ships for free, rather than not provide assistance.

Their guidance on support to Non-News Media explains, “The abatement/waiver option is to ensure that projects justified to be in the interests of benefitting Departmental reputation are not lost due to unaffordable costs.”

Specific files on ‘No Time to Die’ are not yet available, but it is likely that the MOD saw the movie as very positive for them, and that supporting the film was, as their directive requires, an, “opportunity to enhance profile and increase public awareness of and support for Defence.”

The Bond franchise has long been a favourite of the British and American military, intelligence and foreign policy establishment. Ian Fleming worked for British naval intelligence during World War II, while producer Albert Broccoli had a history of making films with British military assistance. Terence Young, who directed three of the first four Bond movies, also worked in military intelligence during the war, while both Sean Connery and Roger Moore had military backgrounds.

Over time, Fleming developed a close friendship with Allen Dulles, CIA director from 1953-1961, and they maintained a lengthy correspondence about Fleming’s books as well as Dulles’ own memoir, which he provided to Fleming even before it had passed CIA internal review.

As academic Chris Moran discovered, this friendship extended to Dulles influencing how the CIA were being portrayed in the Bond novels, as well as asking the Agency’s own technical division to try to recreate some of the spy gadgetry depicted in the books.

When it came to the film adaptations, Pentagon support to the long-running series began on ‘From Russia with Love’. Former US Air Force photographer Charles Russhon, who was working as a consultant in the movie business, used his military connections to get access to Istanbul for filming. The US Army provided help on ‘Goldfinger’ for the signature sequence at Fort Knox, but it was on ‘Thunderball’ that they really pushed the boat out.

The Royal Navy, the US Navy and the US Coast Guard provided ships for the final showdown with Emilio Largo and his yacht of imminent doom, while the Fulton skyhook that was used to rescue Bond and Domino from the water at the end of the movie came from a curious source.

A small airline company called Intermountain Aviation provided the plane and the skyhook, but Intermountain were a CIA front company, part of the Air America nexus. Tracking the tail numbers reveals that the plane that appears in ‘Thunderball’ was the same one used for the CIA’s Operation Coldfeet, when they used the skyhook to retrieve two officers who had been dropped into the Arctic to examine an abandoned Soviet spy station.

Cooperation between the Pentagon and James Bond continued into the 70s and 80s, though ‘Never Say Never Again’ was rejected due to concerns over its ‘loose nukes’ scenario.

‘Octopussy’ also ran into trouble with the US military due to the bawdy title, but as one internal memo pointed out, “Pussy Galore was the name of a character in an early Bond film which was granted cooperation and I do not remember any unfavourable comments being received.”

The memo went on, “Pussy is still used in referring to cats and ‘pussycat’ is still a common word. I believe we would be criticised if we refused assistance because of the title.”

This relationship between Bond and his real-life counterparts in the military and intelligence world has persisted through to the most recent entries in the series. The ‘Home Alone’-style climax to ‘Skyfall’, which supposedly took place at Bond’s ancestral home in Scotland, was actually filmed on a custom-built set on MOD land on Hankley Common, near Elstead in Surrey. Hankley Common was also used for ‘The World is Not Enough’ and ‘Die Another Day’.

Similarly, the long, lingering shot at the end of ‘Skyfall’, where Bond looks out across Whitehall, was filmed on the roof of the now-discarded Department of Energy and Climate Change.

This cooperation has frequently involved script rewrites, often to help show the British or American militaries playing a crucial role in helping Bond take down the bad guys. In return for decades of assistance from various branches of the government, the franchise has produced over two dozen films that act as blockbuster promotions for the MOD, Pentagon, CIA and MI6.

Perhaps the most laughable change to a Bond script came at the request of the Pentagon, on ‘GoldenEye’, named after Fleming’s holiday home in Jamaica.  In one scene where the dastardly Russian Xenia Onatopp murders a naval officer in order to steal his identity and run off with an experimental helicopter, the original script had the admiral as an American.

The Pentagon had serious objections to this detail, and noped it out of the script. The admiral became French, but this presented a new problem. The producers needed to borrow a French frigate to stage the scene where the next generation helicopter is stolen, and the French weren’t too happy about being shown as suckers.

As a result, the officer became Canadian, and the murder and helicopter theft sequence features several embarrassingly conspicuous close-ups of the dead officer’s ID card, with maple leaf front and centre. Phil Strub, then head of the Pentagon’s Hollywood office, wrote the producers a letter, saying “We appreciate your changing the identity of the admiral to a foreign officer.”

The CIA’s involvement in the Bond franchise officially ended in the 1960s, after Fleming died and Dulles was moved on from the Agency. However, that didn’t stop them from inviting Daniel Craig to CIA headquarters in 2018, where, “Mr. Craig met with our leadership and workforce, who explained that real life espionage is a lot more “cloak” and a lot less “dagger” than presented in the entertainment world of spy vs. spy.”

Clearly, the Bond icon has been supercharged over decades via superior production values provided by a range of British and American government agencies.  In exchange, those agencies get to tap into the positive PR that Bond provides, having helped create that icon in the first place. ‘No Time to Die’ is simply the latest move in a propaganda dance that goes back a lifetime.