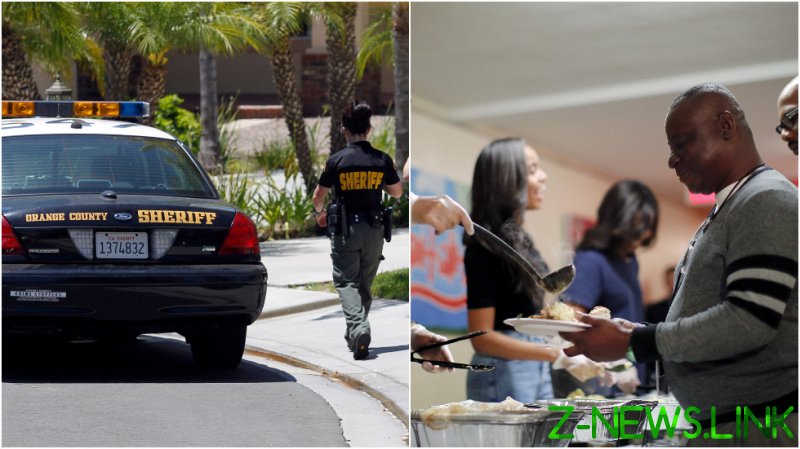 The Orange County and Sacramento sheriff’s offices issued separate statements on Thursday night saying they would not respond to calls related to compliance with the new health mandate imposed by Newsom earlier in the day.

“The Sacramento County Sheriff’s Office will not be determining – including entering any home or business – compliance with, or enforcing compliance of, any health or emergency orders related to curfews, staying at home, Thanksgiving or other social gatherings inside or outside the home, maximum occupancy, or mask mandates,” Sacramento Sheriff Scott Jones said in a lengthy Facebook post.

Those calling to report violations of the order would be referred to a non-emergency line and “routed” to the county health department, Jones went on, but added that “Of course, if there is potential criminal behavior or the potential for impacts to public or personal safety we will continue to respond appropriately.”

Hours later, the sheriff for Orange County, some 400 miles south of the state capital, issued a similar disclaimer noting that deputies would simply refuse to enforce the mandate, which sets a 10pm to 5am curfew for “non-essential work and gatherings” and comes into effect on Saturday at 10pm.

“At this time, due to the need to have deputies available for emergency calls for service, deputies will not be responding to requests for face-coverings or social gatherings-only enforcement,” said Sheriff Don Barnes, adding that the department is still “assessing the action by the governor.”

The statements immediately stoked controversy and debate online, with those skeptical of mask mandates and lockdown orders hailing the sheriffs for standing up to “Newsom’s dictatorship” and “tyranny.”

Newsom has come under fire in recent days after photos surfaced showing him at a crowded dinner party held partially indoors, where some attendees went mask-less – all in violation of his own restrictions. While he argued the gathering followed “health protocols and safety precautions,” he nonetheless apologized, saying he “should have modeled better behavior” after repeatedly warning Californians about following the rules.

Other backers of the sheriffs weighed in to reinforce their case for placing emergency response over enforcing a “lack of common sense and personal responsibility,” referring to residents who flout the new restrictions.

Critics also emerged to oppose the move, calling it “disappointing” and insisting that lockdown violators “need to face consequences” amid the pandemic, some even calling for Barnes’ removal from office.

“So, the OC sheriff believes he can pick and choose which laws to order his personnel to ignore. He’s refusing to uphold his oath of office and should be removed,” one commenter said.

Newsom’s “limited” stay-at-home order comes as California approaches 1.1 million coronavirus infections and over 18,500 deaths, according to data compiled by Johns Hopkins University. The state comes second in the US for overall cases, trailing only Texas, as the nationwide total exceeds 11.7 million infections and 252,000 fatalities.