Home / WORLD / ‘No malice intended’: Women’s football star says she got ‘all sorts of abuse’ after horror red-card tackle on rival (VIDEO)

‘No malice intended’: Women’s football star says she got ‘all sorts of abuse’ after horror red-card tackle on rival (VIDEO) 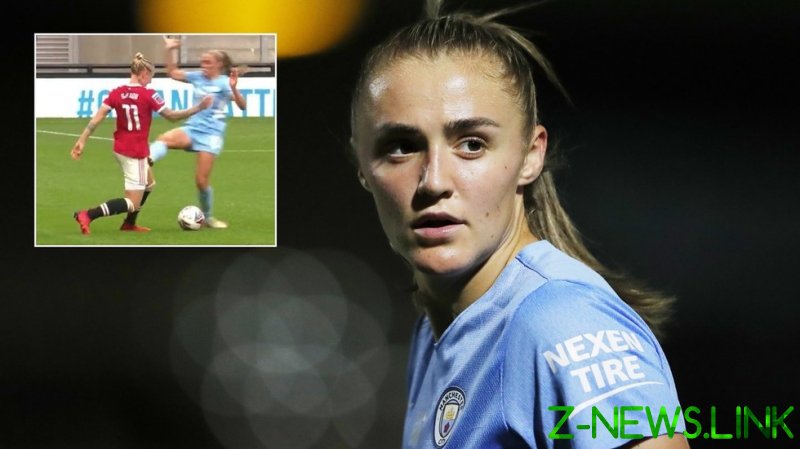 England international Stanway, 22, received her marching orders after she chopped down Leah Galton in the first half of the game with their arch-rivals.

Stanway, who was deputizing at right back for Manchester City, let loose with the x-rated tackle around the 35 minute mark of the match which eventually finished as a 2-2 draw, prompting furious protests from Galton’s teammates as she lay injured on the pitch.

But writing on social media early on Sunday, Stanway apologized to Galton for the reckless challenge – also stating that she has been subjected to numerous abusive and offensive messages on social media due to the nature of the tackle.

“I want to apologize for the sending off in yesterday’s Manchester Derby,” Stanway wrote on her Twitter page.

“Everyone who knows me knows I’m passionate and competitive. There was absolutely no malice intended and I’m glad Leah was okay and able to carry on with the game.

“A huge thank you to my Man City teammates for the support and effort to secure a point. And to both sets of fans for creating an unbelievable atmosphere.

“I made a mistake and hope everyone can accept my apology but I shouldn’t have to log into social media and find myself subjected to all sort of abusive messages – remember we are all human and mistakes happen.”

Stanway’s impassioned plea to the trolls was met approval online, with her Man City and England teammate Alex Greenwood responding: “We got you.”

Manchester City’s official Twitter account, meanwhile, responded with a pair of blue love hearts, while a supporter of the club gave Stanway a pass for the challenge and said the the harassment she has received has been utterly uncalled for.

“The people who know you well will know there was no malice intended when you went in for that challenge,” they wrote. “Did you get it wrong? Yes you did but you & all other players don’t deserve the online abuse you receive. Hold your head up high & we go again.”

The victim of the tackle, Galton, also offered her support, tweeting: “People need to stop with the abusive messages. It’s ridiculous @StanwayGeorgia I hope you are okay. Thankyou for your apology.”