Home / WORLD / No longer ‘JUST AN IDEA’? With Trump on way out and Biden on way in, Portland mayor finally vows to ‘push back’ against Antifa

No longer ‘JUST AN IDEA’? With Trump on way out and Biden on way in, Portland mayor finally vows to ‘push back’ against Antifa 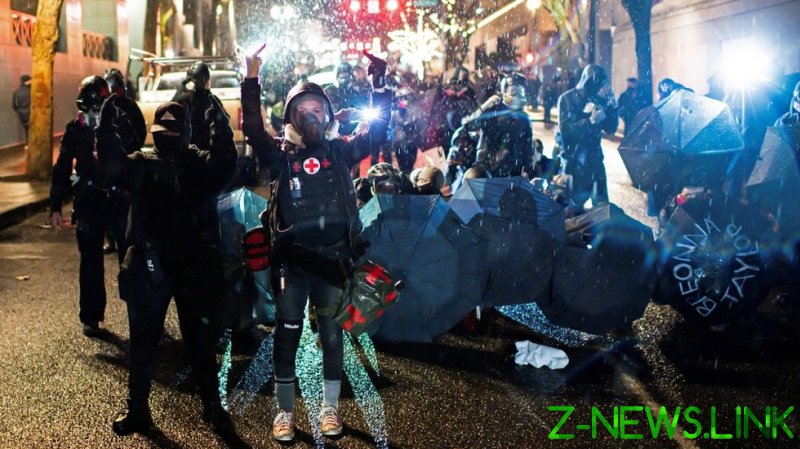 “My good-faith efforts at de-escalation have been met with ongoing violence and even scorn from radical Antifa and anarchists,” Wheeler said Friday, in a New Year’s Day address. “In response, it will be necessary to use additional tools and to push the limits of the tools we already have to bring the criminal destruction and violence to an end.”

Wheeler went so far as to condemn “anyone who engages in violence or criminal destruction” and called on federal law enforcement agencies to partner with local and state police to develop plans for fighting anarchist violence. The statement comes after months of the mayor blaming President Donald Trump for inciting violent protests.

The timing of Wheeler’s turnabout – with Democrat President-elect Joe Biden scheduled to take office on January 20 — wasn’t lost on social media users. One commenter translated the mayor’s message as follows: “Antifa has outlasted their usefulness. I cannot let them continue to be a nuisance to the Biden administration.”

Other observers mocked Wheeler and other Democrats for previously downplaying Antifa’s negative impact. Biden even called the group “an idea, not an organization” in his September 29 presidential debate with Trump.

“But Joe Biden told us Antifa was just an idea,” Trump supporter Matt Hudgens said. “Also, you’re a year late. You wanted the riots for political gain. Don’t act like suddenly you condemn them now.” School-safety activist Kyle Kashuv echoed those sentiments, saying, “But I was reliably told by officials (Ted Wheeler) that Antifa was just an idea.”

The Portland Antifa and Black Lives Matter riots, which began in late May after the death of George Floyd in Minneapolis police custody, have resulted in millions of dollars in property damage and led to violent assaults, murder and the temporary takeover of a section of the city, which was declared a separate country.

Wheeler announced in early September that he was moving out of his upscale Pearl District condominium after rioters tried to torch the building.

Even then, Wheeler lamented the incident from the perspective that it distracted from “the important message of the racial justice movement” – not as a sign that those responsible for the violence need to be apprehended and punished.

Wheeler said Friday that Portland needs to upgrade its surveillance capabilities to gather intelligence on “small groups of organized criminals.” He also called for harsher sentences against those convicted of damaging property and suggested that the perpetrators be required to meet with the victims of their crimes and perform community service work, such as picking up litter and removing graffiti.

He told business owners and others who have been victimized that, “I want you to know you have my full sympathy.”

“It’s time to push back harder against those who are set on destroying our community and to take more risks in fighting lawlessness,” Wheeler added.

Twitter users ridiculed Wheeler for arriving at that conclusion so late in the game. “He’s trying to put the toothpaste back in the tube,” former US House Speaker Newt Gingrich said.

Podcast host Felix Fernandes agreed, saying Wheeler is “about six months late with his tough talk. His inaction is why it’s even an issue today.”