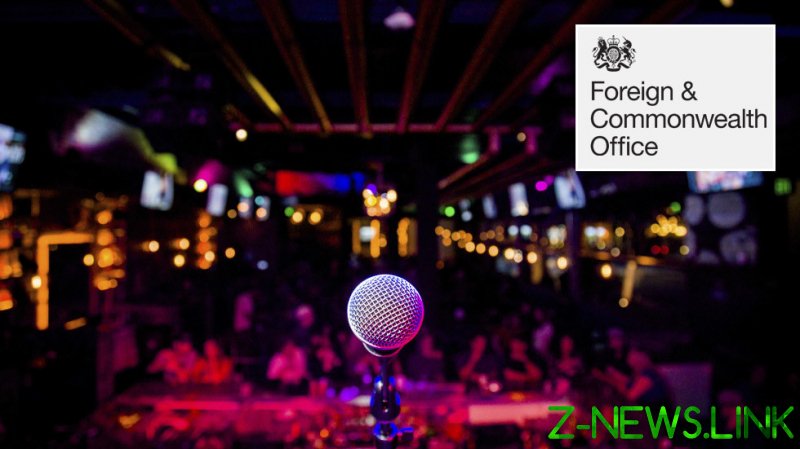 The Baltic states, all members of NATO, are considered strategically vital by London and Washington. They are also home to a sizable Russian-speaking population, a legacy of the countries once being constituent states of the Soviet Union.

Albany was just one of several firms potentially running FCDO-funded psyops in the region. Zinc Network, which has conducted a variety of clandestine operations for the UK government at home and abroad, is another.

In response to an FCDO tender, according to the leaks, the company submitted extensive proposals, pledging to “build a vibrant and innovative independent media sector” in the Baltic states, “which aligns credible brands, online communities of interest, and quality content to service highly specific audience segments.” Among other eyebrow-raising covert strategies, the company offered to disseminate anti-Russian propaganda via the recruitment and promotion of stand-up comedians.

Profiles of individuals involved in the proposed campaign indicate Urve Eslas was intended to sit on its advisory board. She is currently adviser to Toomas Hendrik Ilves, Estonian president from 2006-2016, who is himself no stranger to Western information operations. From 1988-1993, he ran the Estonia desk of Radio Free Europe, the US-state run propaganda network. Thereafter, he became the Estonian ambassador to the US.

An accompanying CV notes Eslas manages the domestic and foreign communications of the former leader, including his “information exchanges with the media, the public and other stakeholders.”

It’s unknown if this position would have implications for Zinc’s Baltic project, or vice versa, although her Twitter bio notes she also serves as a “Network Manager” at Open Information Partnership, yet another FCDO-funded information warfare effort targeted at Russia led by the contractor, which seeks to influence the outcome of elections “in countries of particular interest to the FCDO.”

For the endeavor, Zinc claims in the leaked pitch that it conducted extensive analysis of Russian-speakers in the Baltics, in the process identifying two distinct groups therein – “settlers” and “hunter-gatherers.”

The former, representing around 30 percent of the Russophone population, “tend to be monolingual, typically older generations who live in tightly-knit, trusting communities with a shared culture, history and identity.”

The company saw an opportunity to “capitalise” on the “close-knit community ties” of these “settlers,” by “tapping into the high levels of trust they have in locally-shared content, by building the capacity of hyper-local outlets to produce news content they trust and that resonates,” and in the process “harness their social networks.”

“The key to unlocking this target audience is to build hyper-local brands which can tap into this communities’ strong social relationships and online sharing behaviours in order ‘de-couple’ where they get entertainment content from and where they get trusted news,” Zinc stated in the leaked pitch.

“Target media could include local community pages on social media platforms popular among older demographics such as vk.com [Russia’s Facebook alternative] and ok.ru [similar to Friends Reunited], local news websites, and digital and analogue FM radio stations,” Zinc stated. “We will work with them to pool resources and content, helping them create digital strategies which can leverage the sharing habits and online networks of our settler audiences.”

Representing over 70 percent of the target audience, “hunter-gatherers” were said to be multilingual, “typically younger individuals more integrated into wider society.” Residing in Baltic state capitals, consuming news and entertainment “in multiple languages via multiple digital channels”, using “on-demand services” and social media, “or even individual journalists or influencers as a way of recommending content in order to navigate media.”

In order to manipulate this audience, Zinc pledged to “build the reach and influence of exciting Russian-speaking journalists and media personalities, including emigre and exile journalists from Russia who have followings amongst different sections of the Russophone community.”

After all, “audiences have strong brand allegiances to individuals,” meaning young Russophones were more likely to trust and absorb Whitehall-approved anti-Moscow key messaging emanating from the mouths of social media personalities, rather than traditional news outlets.

As such, a “minimum” of 15 journalists – six in Estonia and Latvia, three in Lithuania – would be identified for recruitment, and offered “personal brand strategy informed by individual target audience analysis,” help with “growth strategies for their chosen social media platform,” including blogs, Facebook and Twitter, and “digital marketing and campaign training.”

Articles ostensibly written by these individuals would be inserted on “international and regional quality news sites,” and “regular slots with media outlets supported via our other activities,” including state broadcasters and private sector platforms, would also be provided.

Securing those slots would likely be easy, given Zinc also pledged to provide comprehensive covert support to state broadcasters in the Baltic region.

Ironically, the company noted it was presently “hard” for such stations to reach Russophone audiences, given the widespread perception they are transmitting “propaganda”. An example of this shortfall offered was the Russian-language channel of Estonia’s ETV+ having a mere 1.1% viewership reach among the country’s Russian-speakers – a grand total of approximately 4,000 people.

“In order to grow this audience, we need to equip [state broadcasters] to thrive… by connecting them with the platforms, brands and influencers this audience already follows,” Zinc pledged.

“We will work with commissioners to identify young Russian speaking talent in the online influencer, stand-up comedy and social commentary spaces,” the contractor also wrote. “They will be supported to develop three content ideas and pilots each, which will then go live on the [broadcaster’s] social channels and on-demand services to test audience responses and viability.”

Successful programming produced by the connivance would then be broadcast, alongside “other content produced by FCO funded projects,” via on-demand services with “significant following amongst Russian speakers.” Two such platforms identified by Zinc were Megogo and Helio iTV – presumably, their viewers comprised a large number of “hunter-gatherers.”

It’s not clear if Zinc’s proposal was taken up by the FCDO, but other files related to its pitch make amply clear the company has long been engaged in information warfare efforts targeted at Russia, at London’s direction.

In 2017 for instance, the company developed and managed the FCDO-funded Baltic Media Accelerator, in order to “equip smaller media outlets across the Baltics with the skills and tools to increase demand for locally resonant Russian-language content.” Under its auspices, Estonia’s Radio 4, Latvia’s HelloSolyanka and Lithuania’s Nanook received four months of “intense and tailored” training and support from Zinc.

“As a result, HelloSolyanka increased their monthly revenue by 202 percent by implementing a business plan for a new online and offline media product,” Zinc bragged. “Nanook received grants from the Lithuanian Ministry of Culture as well as Oregon University for their innovative model to reach local minorities with storytelling, and Radio 4 successfully pitched their new business and radio format KISA FM to err.ee.”

Similarly, it’s clear Zinc manages a vast clandestine nexus of online “influencers” in Russia and its near-abroad. These individuals are “identified and recruited” by the company on the basis of their “authenticity and standing with the groups we seek to impact,” and helped to craft “bespoke content to deliver messages that are both resonant and credible with specific audiences.”

An accompanying case study states that in Russia and Central Asia, Zinc supported 50 social media influencers “to challenge disinformation,” and established and trained “a network of investigative journalists in Russia working on corruption and governance issues.”

In Estonia and Latvia, Zinc also enlisted 12 Russian-speaking social media influencers, and helped them create and disseminate 28 pieces of video content, which “attracted an overwhelmingly positive response and achieved over 3.4 million views.” This subterfuge was said to represent “a successful strategic intervention.”

ZAG’s social media accounts have mostly been deleted since, although Zinc alleges its YouTube channel at one point boasted over 17,000 subscribers, its 36 videos garnering around two million views.

Zinc’s own website reveals the company produced five TV series in the Baltics – “two of which are now in their second series, including the region’s first Russian-language children’s show.”

It’s unclear to which particular programming this passage refers, and indeed quite how many people watched the shows in question, although it’s certain that viewers – many of whom were very young indeed – had not the slightest clue as to Zinc’s ultimate goals in producing the content.

Similarly, one can only guess at the identities of the large number of Russian-speaking YouTubers, Instagram personalities, anti-corruption campaigners, and citizen journalists, in receipt of financing and orders from London.

It stands to reason, though, that at least some of the ‘grassroots’ figures who routinely crop up as local ‘experts’ in mainstream media reporting on the region will be effective agents of the British state, following a script prepared by Whitehall.

The FCDO and Zinc Networks have been approached for comment.