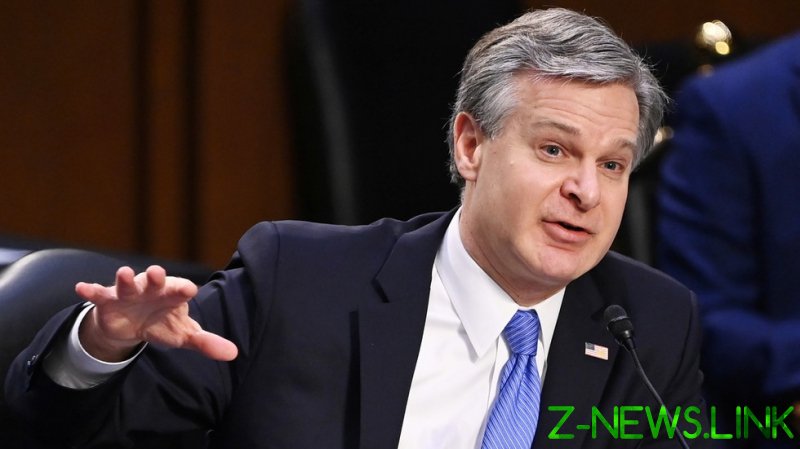 In a Tuesday hearing in front of the Senate Judiciary Committee, Wray made it clear he believed the January 6 riot was an example of “domestic terrorism,” an issue he sees as an increasing problem in the US.

“January sixth was not an isolated event. The problem of domestic terrorism has been metastasizing across the country for a long time now and it is not going away anytime soon,” Wray said in opening remarks, revealing the FBI has arrested over 270 individuals involved in the Capitol riot and hundreds of cases are underway.

Though theories have been floated extreme left-wing groups like Antifa or fake Trump supporters could have been behind some of the day’s events, in which five people died, Wray said repeatedly there has been no evidence thus far of either of these.

“We have not, to date, seen any evidence of anarchist violence extremists or people subscribing to Antifa in connection to the sixth,” Wray said, at another point expressing the same lack of evidence when it comes to non-Trump voters.

While Democrat members of the committee kept their focus on “white supremacy” in relation to domestic terrorism, some Republicans pushed to point out protests that have turned violent in the months leading up to the January Capitol riot that included more left-leaning groups.

“We’re not serious about attacking extremism if we care about some government buildings being attacked but not others. We’re not serious about attacking domestic extremism if we only focus on white supremacy movements, which isn’t the only ideology that’s responsible for murders and violence,” Sen. Chuck Grassley (R-Iowa) said when questioning Wray.

Sen. Rick Durbin (D-Illinois) directly shot back at claims that left-wing groups are as equal a threat as more conservative-leaning extremists.

“Let’s stop pretending that the threat of Antifa is equivalent to the white supremacist threat. Vandalizing a federal courthouse in Portland is a crime. It should be prosecuted to the full extent of the law,” he said. “But it is not equivalent to a violent attempt to overthrow the results of elections, nor is it equivalent to mass shootings targeting minority communities.”

Not all Republicans were interested in highlighting groups beyond perceived “white supremacists” during their time questioning Wray. Sen. Lindsey Graham (R-South Carolina) actually suggested enlarging the FBI to combat the threat of domestic terrorism, asking Wray to submit a list of expansions his agency needs to combat a problem that, according to the director, has “grown dramatically.” Graham even suggested “international” terrorists could work to “infiltrate” domestic terrorist groups within the US to commit acts of terror, especially with the 20th anniversary of 9/11 coming this year.