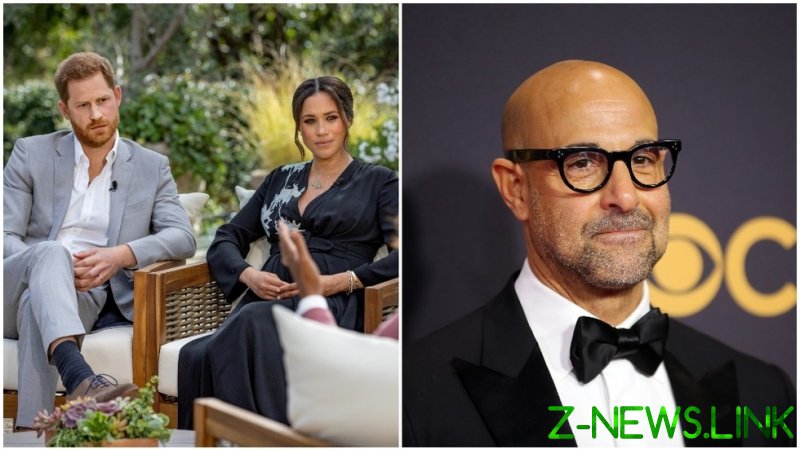 Winfrey’s sit-down with the royals was watched by more than 49 million people in the first three days after being aired in March, according to CBS.

Yet, the CBS interview lost the Emmy in the Outstanding Hosted Nonfiction Series or Special category to actor Tucci’s CNN show about Italian cuisine, history and culture, ‘Stanley Tucci: Searching for Italy’. A Netflix talk show helmed by veteran host David Letterman was also nominated for the same award.

Tucci, who revealed this month that he had beaten cancer in the recent past, did not attend the ceremony in Los Angeles, but provided a pre-recorded speech, according to Deadline. A known food enthusiast, he has written several cookbooks, including ‘Taste: My Life Through Food’, which will come out next month.

In the explosive interview, Markle detailed how she struggled to fit in with the royal family and had suicidal thoughts while living in the UK. She accused the royals of failing to shield her from the criticism in the media.

Harry, in turn, spoke about how he had become estranged from his father, Prince Charles, and brother, Prince William.

The couple discussed how they decided to relinquish some of their royal duties in 2020 and relocate to the US in a move that surprised and bewildered many Britons at the time.

In what was, perhaps, the most talked-about moment of the interview, Markle claimed that an unnamed member of the royal family was concerned about the skin color of her and Harry’s future child. Winfrey later clarified that Harry told her the person in question was not the Queen or late Prince Philip, Harry’s grandfather.

Following the interview, Buckingham Palace released a statement saying the Queen and her family were “saddened” to learn about Harry and Meghan’s challenges in recent years and that they took the issue of race seriously. William separately told reporters the royals were not racist.

Some scoffed online at the royal couple’s interview getting snubbed at the Emmys, while others congratulated Tucci for the win. “‘Three Random Celebrities Whining’ just couldn’t win,” a person tweeted.

“No Emmy for the Meghan and Harry moan to Oprah special,” journalist Peter Ford wrote.