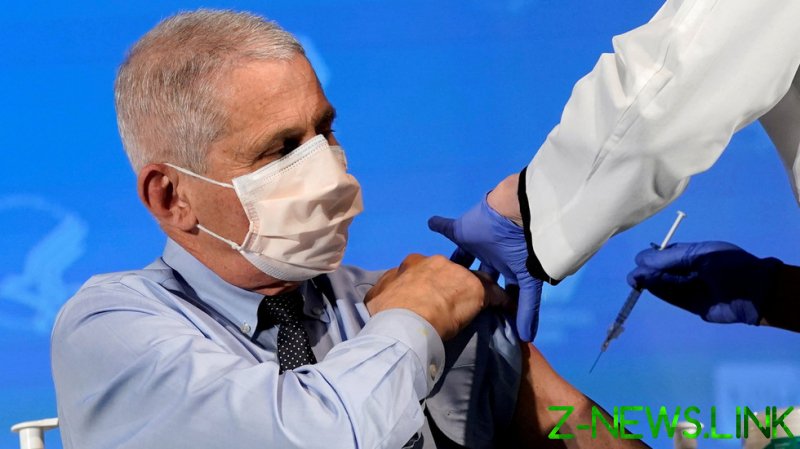 “What’s the science behind not saying it’s safe for people who have been vaccinated…to travel?” CNN’s John Berman asked Fauci on Wednesday, noting too that the Biden administration’s promise to base their Covid-19 decisions and recommendations on “science.”

Fauci struggled to explain the lack of a recommendation, saying the US Centers for Disease Control (CDC) is “carefully heading in that direction,” but “they’re being careful” and want to collect solid “data” before endorsing travel.

The CDC released new guidance for vaccinated Americans on Monday, saying it is safe for fully vaccinated people to gather indoors without wearing masks or social distancing. It’s also safe enough, the agency said, for those who took the shot to be around small groups of unvaccinated people if the latter are not considered high-risk or don’t live with somebody who is deemed high-risk.

They have, however, fell short of giving the green light for vaccinated people to travel, instead claiming air travel could put the country at risk for another surge. Industry group Airlines For America has pushed back against this, saying air travel is a low-risk activity because of mask mandates and other precautions taken by airlines.

Fauci’s seeming admittance that pushing against travel is a “judgement call” with little science or data to back it up has led to a fresh round of frustration with the Covid-19 ‘expert,’ something that shouldn’t be new to him.

“He’s the star of the show. He never wants this to end,” actor David Sutcliffe added.

CDC Director Dr. Rochelle Walensky, who also spoke to CNN on Wednesday, said the CDC would only endorse air travel when more people are vaccinated based on previous surges, most of which occurred before vaccines were approved and being distributed.