No ‘consensus’ at NATO on Nord Stream 2 pipeline – Stoltenberg 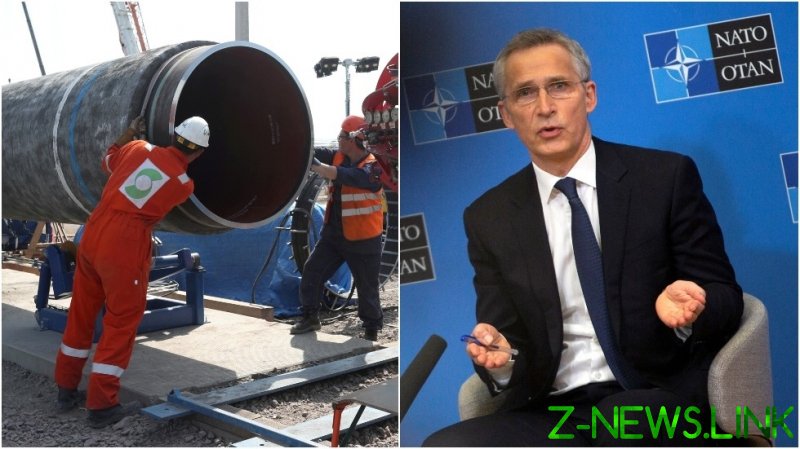 The US, which calls the shots in the alliance, is demanding that the nearly complete offshore pipeline be shut down, while another key member, Germany, wants the project to be finished as it sees a steady supply of Russian gas as essential for its own and the EU’s energy security.

When asked at a press conference on Tuesday whether the deadlock between Washington and Berlin threatened the bloc’s unity, Stoltenberg acknowledged that “there are different views within NATO on the Nord Stream 2 project… It’s not only the US, but also some other allies that are critical, but then – other allies have different views.”

“We don’t have any position on Nord Stream 2,” he said, explaining that NATO is “based on consensus” among the members and it can’t be achieved on this issue.

“Of course, all of us appreciate when allies are able to agree, at the same time I’m also confident that NATO has proven over years that we’re able also to continue to stay committed to our core cause to protect and defend each other despite the fact that sometimes there are differences,” Stoltenberg added.

Earlier on Tuesday, the NATO secretary-general met with US Secretary of State Antony Blinken, who reiterated Washington’s opposition to the Russian-led project.

“President [Joe] Biden has been very clear, he believes the pipeline is a bad idea, bad for Europe, bad for the US, ultimately it is in contradiction to the EU’s own security goals,” said Blinken, who had traveled to Brussels for his first summit of NATO foreign ministers.

“It has the potential to undermine the interests of Ukraine, Poland and a number of close partners and allies,” the secretary of state argued, adding that US laws called for the Biden administration to sanction companies involved in the Nord Stream 2 project.

German Foreign Minister Heiko Maas said earlier that it was Berlin’s top priority to create conditions for the completion of Nord Stream 2. Mass and Blinken were due to meet in person at NATO’s headquarters to discuss the divisive issue.

The Nord Stream 2 to pipeline, which goes under the Baltic Sea, is currently more than 95% complete. The laying of the pipeline’s second line in Denmark’s exclusive economic zone is set to begin by the end of March.