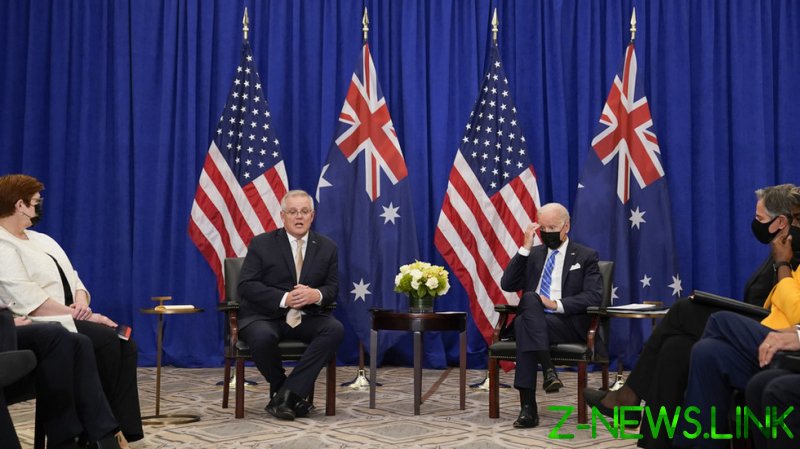 The “United States has no closer, more reliable ally than Australia,” Biden told Morrison on Tuesday in a brief photo-op for the media before they went into a bilateral meeting.

Just last week, announcing the AUKUS alliance between Washington, London and Canberra, Biden appeared to forget Morrison’s name and called him “that fella from Down Under.” Speaking on Tuesday about bringing in other regional players into the fold, Biden said he would discuss the alliance with “Japan, India and India” – presumably Indonesia – later this week.

Britain, with which the US has had a ‘special relationship’ for far longer, wasn’t even mentioned as an afterthought. Nor was Canada, literally a US neighbor to the north. Likewise France, which was an American ally before the US even existed and helped the 13 colonies win independence from London.

Paris was left fuming at the AUKUS announcement not just because it scuttled a massive shipbuilding deal it had with Canberra, but also because it was made on the anniversary of a 1781 French naval victory that directly led to the British surrender at Yorktown.

In his own remarks, Morrison tried to bring in “friends” in Asia and Europe, prompting Biden to say that the US “partnership” with Canberra “is in line with all the other democracies in the world.” It wasn’t clear what he meant by that, however.

Lavishing praise on the alliance between the US and Australia, which was formalized in 1951 with the ANZUS pact, Morrison claimed the two countries “have always shared a partnership that is about a world order that favors freedom.”

France has called the AUKUS deal a “stab in the back” and pulled its ambassadors from Canberra and Washington for consultations. On Monday, French Foreign Minister Jean-Yves Le Drian said the pact was more than just a breach of contract, but a “breach of confidence” between allies, which calls for “serious reflection among Europeans on the very concept that we have of alliances and partnerships.”

An alliance or a partnership means transparency, predictability and communication, “and none of this was there” with AUKUS, Le Drian told reporters, speaking after the UN General Assembly opening session.

He also said that to Paris, the AUKUS alliance seems “very confrontational toward China,” something Washington, London and Canberra have carefully avoided addressing directly.