Home / WORLD / No, China’s Belt & Road Initiative is not falling apart, this is just US propaganda, right on cue as Congress promised

No, China’s Belt & Road Initiative is not falling apart, this is just US propaganda, right on cue as Congress promised 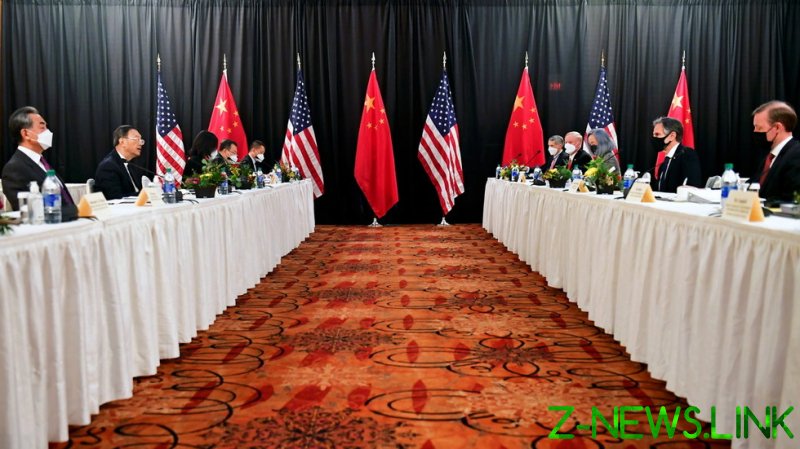 The study, as noted in the report, was sponsored by the US government through the surrogate of its own international relief agency, USAID, and proceeded to present the usual cliches that China was maliciously saddling nations in “hidden debt,” encouraging corruption and promulgating environmental damage in participating countries, and claimed that opposition to the investment programme was mounting.

The publication of this report coincidentally came in the same week as US officials commenced a tour of Latin America in order to counter China’s mega investment there under the Belt and Road Initiative (BRI). This follows a G7 pledge in July to launch a  global infrastructure development, dubbed Build Back Better World (B3W), as a counterweight to Beijing’s BRI.

Funny how all that’s needed if BRI is failing as badly as the ‘study’ claims.

This is not a coincidence. The report is essentially a sneaky US government public relations stunt weaponized toward disparaging China. Propaganda, in other words.

The United States is skilful in, and has a long history of, meting out its foreign policy talking points through various ‘studies’ via linked organizations and groups that present an illusion of independence, which then the mainstream media always amplify in a concerted campaign. We’ve seen this happen in numerous areas, most prominently with the Xinjiang autonomous region and allegations of forced labor in the first half of this year.

It is strange that large scale emphasis on that has disappeared, and now the agenda is being turned toward trashing the Belt and Road Initiative. But we knew this was coming. When the US Senate prepared its ‘strategic competition’ bill earlier this year, it notably earmarked $300 million in funding to deliberately spread “negative news” regarding “the impact of China’s Belt and Road Initiative” throughout the world. To no surprise whatsoever, this is what the newly published BRI ‘study’ is doing, and it’s a sign of things to come.

Is Belt and Road really failing and losing momentum? That’s the spin which Reuters takes, but evidence strongly suggests otherwise. Often with mainstream media reporting on the BRI, you hear almost exclusively about the small number of BRI projects which are failing or mired in local controversy, as these are the ones which they hope will set the narrative and define the project in a critical and controversial light. It’s true, for example, that some BRI projects in Malaysia have been canceled, such as the proposed high speed railway linking Kuala Lumpur to Singapore.

The MSM narrative predictably seizes on these developments and makes sweeping generalizations, ignoring other circumstances that might lie behind the setbacks. For example, the Malaysia high-speed railway was a casualty of the global economic slowdown caused by the Covid pandemic, which placed financial strain on the governments involved and forced them to make cuts.

Yet the event is spun as a ‘backlash’ to China or even as a “high speed railway” to nowhere. In such a huge programme such as BRI, spanning almost $1 trillion and thousands of projects worldwide, it is inevitable that some will not materialize.

And Western MSM makes sure that you don’t hear of the BRI projects that are successful, because portraying China’s contributions in a positive light effectively amounts to a form of blasphemy.

Here’s a flavor of what they aren’t telling you. A study from Refinitiv, one of the world’s largest providers of financial markets data and infrastructure, found that, as of 2019, over $516 billion worth of BRI projects had been completed with a cancellation rate of just 0.3%. It counted 2,631 different projects across the world, in more than 120 countries.

To name but a few examples of BRI successes: China finished a metro system in Lahore, Pakistan, last year, opened a 1000MW nuclear power plant in the same country in May, is building Africa’s largest building in Egypt, as well as the largest building in South Asia (the Lotus Tower in Colombo, Sri Lanka), and is on the verge of finishing the China-Laos High Speed Railway. Multiple direct transcontinental railway routes through China to Europe have also been opened.

The study by Refinitiv, which is headquartered in the UK, also proceeded to pour cold water over the idea of a ‘debt trap’ for participating countries, noting that a review of 40 cases of China’s external debt renegotiations painted a different picture. The BRI is not being imposed, it is not dogmatic and nor is it monolithic, and it is more flexible and pragmatic than it’s given credit for.

When BRI projects are perceived as too expensive or unpopular, the host countries often renegotiate them with China, which generally adapts its position accordingly, making BRI far from being the zero-sum caricature which the US and its propaganda ecosystem accuses it of.

The idea that developing countries blindly and naively accept one-sided terms, jump into self-penalizing agreements, and thus don’t know ‘what their best interests are’, is insulting. It is promoting, as usual, the idea of ‘Western saviorism’, one that has been used as a justification for colonialism and domination for centuries. There is a staggering lack of historical self-awareness and sensitivity in those who advocate such claims.

The Belt and Road Initiative is probably the most smeared, exaggerated and misrepresented infrastructure scheme in history. For years, Washington has struggled to come up with an answer to China’s grand scheme due to constraints posed by its differing political-economic system, and has most of the time simply resorted to attacking and discrediting it.

The USAID-funded report is nothing more than a renewed and desperate assault, part of a politicized and concerted campaign that Washington hopes will manufacture consent for its foreign policy agenda. Its skewered narrative will downplay and silence the success of BRI projects at all costs, and play up isolated examples of failure in order to tarnish the scheme as a whole. But it isn’t based on reality, and the facts will speak for themselves.