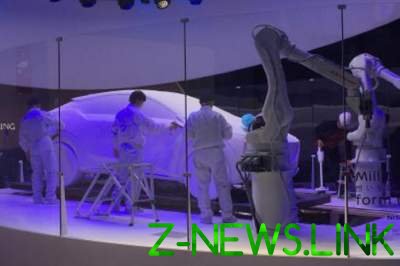 Nissan this year at the motor show Tokyo Motor Show will focus on electric technology.

Nissan at the upcoming motor show in Tokyo will show a concept of its new electric crossover, the design of which the visible elements of a coupe. Premiere of the novelty will take place tomorrow, October 25.

The teaser is clearly seen how the new crossover Nissan. Personally we had the impression that the Japanese are preparing to launch a space ship. This effect is created by industrial robots and the whole atmosphere of the Assembly shop, including violet light.

NissanК unfortunately, Nissan has not yet announced the name of this electric crossover. I hope that tomorrow we still know his name. Judging by the teaser for the premiere in Tokyo is preparing a compact SUV with some features of a coupe. Actually, recently, many automakers began to develop a crossover coupe. Motorists attracted to their sports design, for which many are willing to tolerate not even a very large salon.

We have no doubt that Nissan will give this crossover a very powerful powerplant, as he already has extensive experience in the production of electric vehicles. It is now the Nissan Leaf is the best-selling electric car in the world.

Nissan this year at the motor show Tokyo Motor Show will focus on electric technology, as indeed almost all other Japanese automakers. Get ready to see the “charged” concept Leaf Nismo, specifically designed to compete with Ford Focus RS.