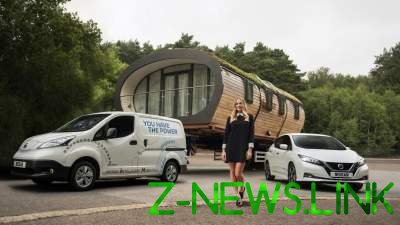 Van could tow a trailer weighing 1017 kg, which is the best achievement among electric cars.

Now Nissan is awaiting official confirmation from representatives of the Guinness Book of records. The record was set in Australia, and the trailer and hoisted the original eco-home of a local actress Margot Robbie.

The star herself at this time sat behind the wheel of a new Nissan Leaf in 2018. For reference, according to the passport data, standard электрокарNissan e-NV200 is able to tow a trailer weighing 430 kg. that is, the record twice this figure, although it is stated that it was installed on the standard model.

By the way, electrovan Nissan by 2018 model year was a small update. New battery is 40 kWh increased range of up to 280 km on the European NEDC cycle.