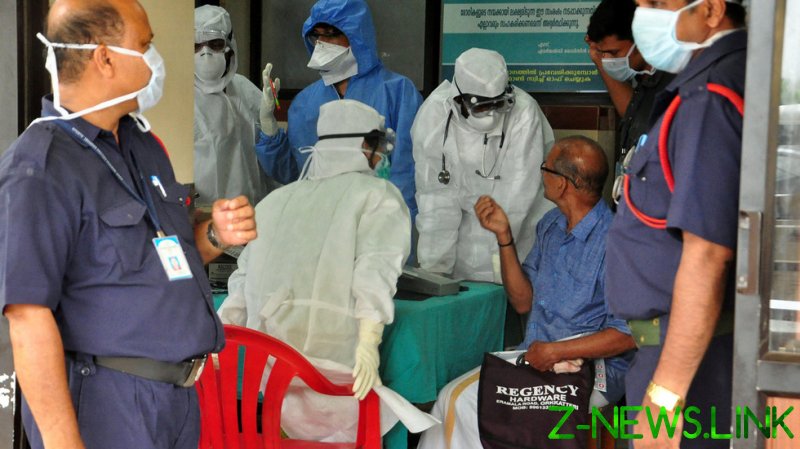 The number of people showing symptoms for the virus hit 11 on Monday, according to Kerala Health Minister Veena George. Among the symptomatic are the parents of the 12-year-old boy killed by the virus on Sunday, in addition to other relatives and healthcare workers who treated the youth.

“Their condition is stable. The boy’s mother had a fever on Sunday night, but it has subsided now,” the minister told reporters, adding that a contact-tracing list of some 251 people had been created, with 54 of them considered ‘high-risk’ and placed into isolation.

Around 129 on the list are medical staff, and of those, 30 are in the high-risk category. George noted that the 12-year-old had been brought to at least four different clinics for treatment before he passed, “that is why a majority of the contacts are healthcare workers.”

The minister said a special laboratory overseen by Pune’s National Institute of Virology was established at a hospital in Kozhikode to test for Nipah – a bat-borne virus with a high mortality rate – while a team from the National Centre for Disease Control was also dispatched to the state to assist.

According to the World Health Organization, the case fatality rate for Nipah ranges between 40% to 75%, depending on the nature of the outbreak. Although it is far more lethal than the coronavirus, Nipah is considered to be less infectious.

Several half-eaten rambutan fruits were also taken for screening, as the 12-year-old Kerala boy had reportedly eaten them near his home. Health officials noted the residence is located near a habitat for fruit bats, which are natural carriers of the virus and known to feed on rambutans.

Blood and saliva samples were also collected from several goats in the area, as other animals are also susceptible to the virus, and will be analyzed by the Department of Animal Husbandry, the Hindu reported.

Though there is currently no vaccine against Nipah, George noted that sometime in the next week, the Indian Council of Medical Research would obtain monoclonal antibody treatments from Australia, which have been found to be effective against the illness, as well as the related Hendra virus.

A similar treatment was used to help contain a previous Nipah outbreak in Kozhikode, which killed 17 people in 2018. Australia – which developed the antibodies after facing its own deadly Hendra outbreak in the 1990s – also provided treatments in that case.

While Nipah and Hendra belong to a different family of pathogens than the virus behind Covid-19, monoclonal antibody therapies have been used to treat the latter illness as well. Last May, India’s drugs regulator gave emergency-use approval to an antibody cocktail known as REGEN-COV2, hoping to reduce the risk of severe illness and hospitalization among Covid patients.