Home / Society / Night particular boys: the police leaked people in front of a crowd of athletes

Night particular boys: the police leaked people in front of a crowd of athletes

Now many Pro-government activists hear the same mantra: “remember what the horror was in the’ 90s? Want to be the same?”. I remember being athletic, strong guys, which called for the solution of any problem. For example, the plant includes such athletes (they were then “mobsters” name). Throw the collar all employees and announce that they are the owners and legitimate authority. And who opposed him in the eye. What happened last night Drama, repeat these raids lads of the era of the TV series “Brigada” with millimeter precision. Team, strong boys force thrown out of the square, fenced off for the construction of the Church of St. Catherine, people. Without understanding, who’s an activist and conservationist, who is a journalist at the certificate, who is just a peaceful bystander. 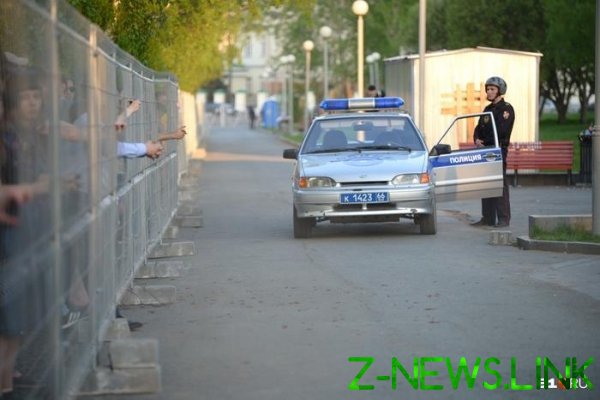 The protest is peaceful, there is no conflict. Regardie on site

After coordination in social networks, about 19.00 to the fenced Park we pulled together people — several thousand citizens of all ages, social groups and beliefs. At first everything was traditionally, Ekaterinburg, accustomed to hug the pond, the tower. But then, defenders of the Park knocked the fence in several places and rushed in a fenced space. Letting them tried, only employees of chop. The representatives of state power structures, are also on duty inside the perimeter told us clearly live — violations of public order in the actions of the crowd they do not see. 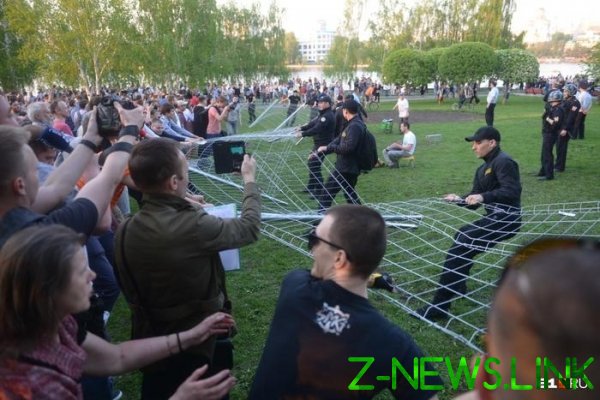 The collapse of the fence of the Park 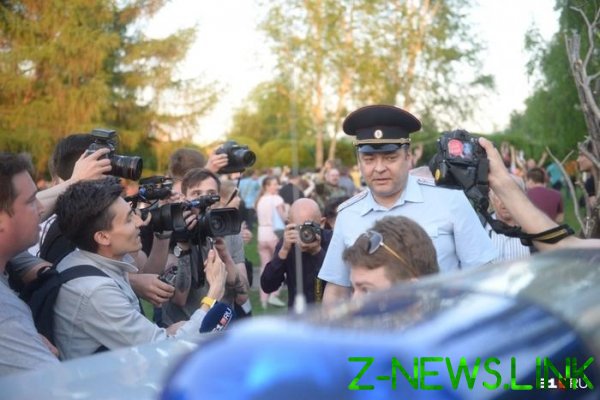 Further severozemelski had fun and walked around the square, the guards closed ranks around the green tents that hide previously laid the first Foundation stone of the future temple. And the police and Regardie (in the form of machines and employees attended different labels) modestly stood aside. And security forces promised the protection of public order. Even when around the tent in addition to the security guards began to appear numerous guys are strong, and one of the city deputies again under our camera drew the attention of law enforcement, the answer remains the same: “We provide law enforcement. Yes, including walking in the Park from strong guys came to protect the temple.”

Interestingly, the last time in prayer for the glory of the temple gathered thousands of different people. Was invited stars such as Sergei Bezrukov. And the meeting of the defenders of the square came the innocent journalist Sheremet. This time to fight with sclerosomatidae came out exceptionally strong boys in sportswear. Many was the emblem of the Academy of martial arts RMK, other inscriptions MMA, hinted that the guys their muscles for bodybuilding pumped. And these guys were the real masters as one of the most Central areas of the city. 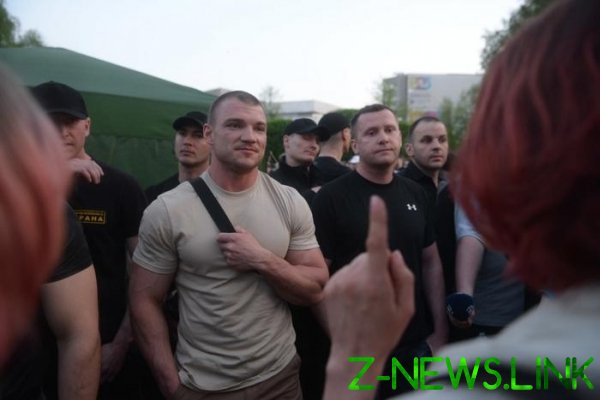 Only those strong guys defended the temple 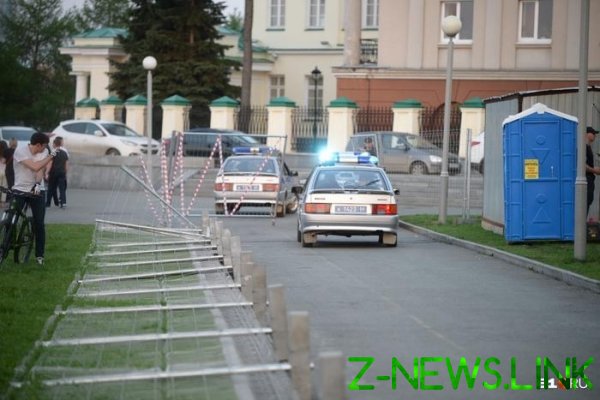 The number of athletes increases, law enforcement officers removed away from the epicenter

As soon as their number reached several dozen from the perimeter of the square disappeared police cars and officers themselves moved to the area, closer to the street Yeltsin. And subsequent events did not intervene. A sportier lads moved the wall on people. The time was about midnight. The fence was brought down about 2 hours ago. Since then a violent head among the defenders of the square got bored and went home, the rest behaved quite peacefully — danced, played musical instruments or just sitting on the grass.

The warm evening drew in the square a lot of ordinary people, romantic couples, the surrounding dog owners and their Pets. And here all this peaceful idyll steamroller and moved sportier lads. We must pay tribute to some of the athletes, acting more or less like a gentleman, for example, the famous wrestler John Shtyrkov, who just went on persuading people to leave. Others acted tougher and meaner. Me one wrestler simply pushed in the chest as I walked backwards and shot him in the face. 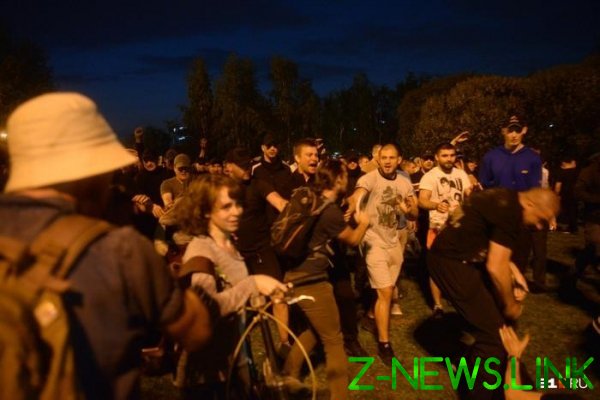 But it was enough to turn my back on him and remove the camera in the back has already received a serious blow on the legs to stand turned to work (this despite the fact that I myself am a growth of 190 and a weight of under 120). People were knocking us down. People were seized and twisted. From my hands knocked the phone when I was already over the fence, which swift athletes cheerfully installed it back just the standards for installation of fences in the gym performed. One soldier, very much repeatables, he sent out a jet of gas cylinder. And only then the guards decided to intervene. However, to no avail — his tale is not given, the militiamen retreated.

See also:  The cyber-police blocked more than 500 "groups of death"

Look, here is so timid COP

And here literally runs away from requests to help to pull the girl who was on the athletes fenced areas of the Park.

And this helplessness of the official power structures over informal is just frustrating. I haven’t seen since they were young, since the 90s, when the tale was no decree. Since then, we all somehow got used that the main force in the city — people in uniform and not in tracksuits. Perhaps it is time to wean. I was ready for a lot of what saw today was blatant to force Chopovtsev and athletes, to ensure that the Park will remain outside the fence, despite all the efforts citizens, journalists will again miss spit on identity. But it’s the first time I saw the guards so helpless. 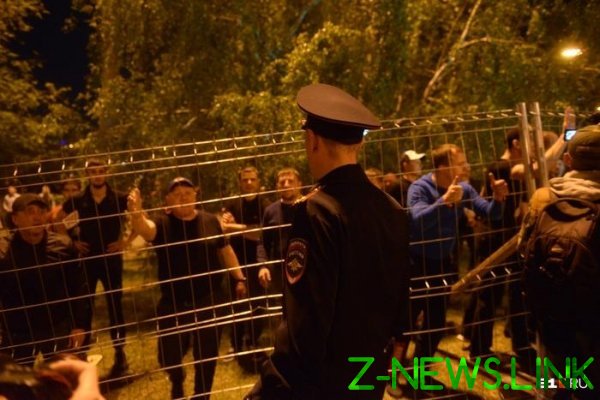 I left before it was over — refused camera operator Maxim Butusova, my phone is after the fall, too, almost didn’t work. As of midnight may 14, the picture was the following: hundreds of people at night at the fence demanding the return of their square. Inside the perimeter security forces require athletes to give them an older or particularly zealous fighters. And along the perimeter fence are strong pimps in sportswear, specifically hinting all over the city who’s boss. 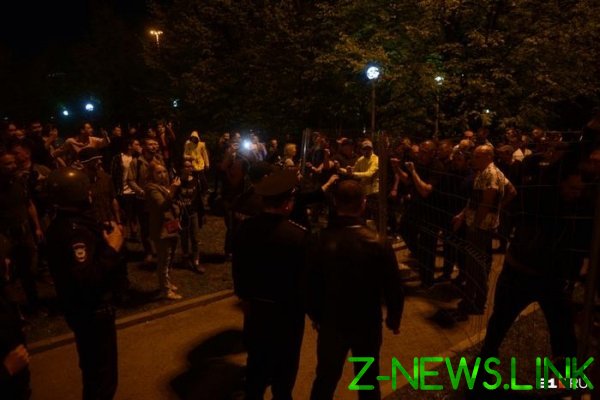 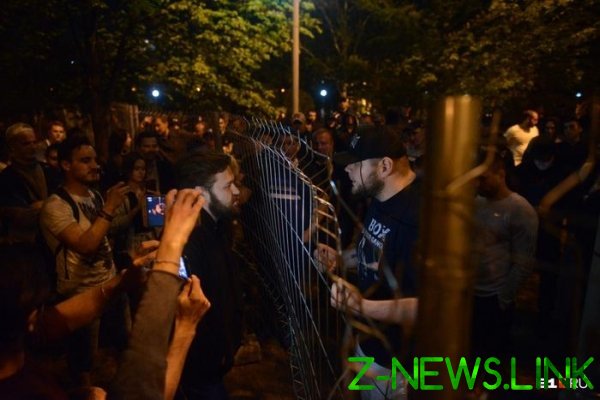 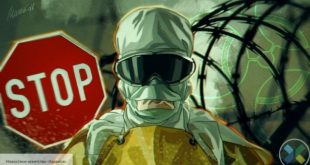 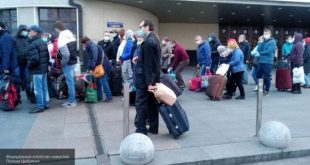 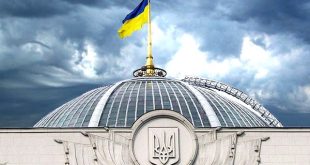