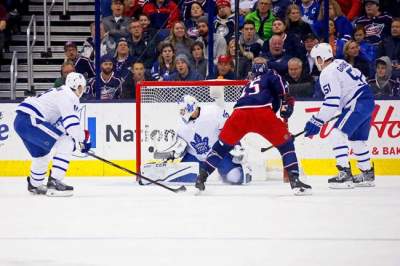 The ocean completed the next day 101st season in NHL history.

In the Central match of the day “Columbus” beat “Toronto” and climbed to third place in the Metropolitan division. First star of the match was the defender of “blue Jackets” Jack Johnson, who scored the sixth goal of the season, then assisted on Pierre-Luc Dubois.

“Calgary” bad extended cut “St. Louis” – “Blues” suffered a fourth defeat in last five matches and dropped to the fourth line in the conference. Braden schenn scored the 17th goal in the season, but it was not enough to take away from Canada points. The winning goal in the final period, scored Dougie Hamilton.

“Philadelphia” after a 10-match series of defeats, transformed, and have won seven of their last eight matches. In the home match with “Detroit”, “Pilots” were twice behind, but managed to turn the game around. The victory to owners was brought 16th goal of the season Sean Couturier.