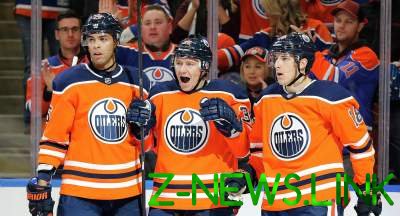 In the United States in the midst of the regular season 101st season in NHL history.

Edmonton on home ice broke a three-match winning streak “new Jersey”. Today’s success for the “oilers” was only the fourth of the season and second in five games.

The key moment of the match came a minute before the end of the second period, when Lucic scored the second goal of the season and allowed the “Edmonton” to go at the last break with the score 4:2. In the final period Dreiseitl and Nugent-Hopkins has secured the success of “Oil”.

The finalist of the Cup Stanley “Nashville” in the away match with the “Anaheim” won the sixth victory of the season and moved to the fifth row in the Western conference.

“Predators” by the 23rd minute led 3:0, and then allowed the hosts to cut the gap to the minimum, and finally all became clear only 18 seconds before the end of the match when Saban scored into an empty net. First star of the match was Roman Yosi (1+1), organized two starting washer
“Nashville”.