Home / WORLD / NFL player Cole Beasley vows not to take Covid-19 jab or follow league’s draconian rules, even if he has to RETIRE 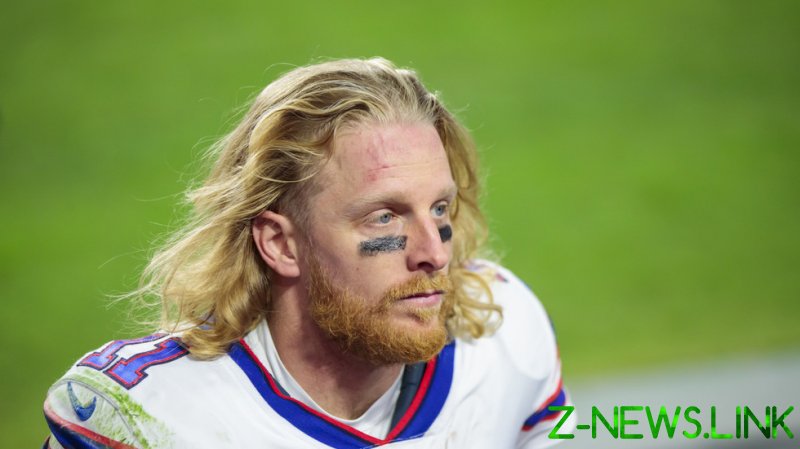 “I’ll play for free this year to live life how I’ve lived it from day one,” Beasley said Friday on Twitter. “If I’m forced into retirement, so be it. I’ve enjoyed the times I’ve had. I’ll get to live freely with my wife, kids and extended family forever.”

The message, which Beasley called a “public service announcement,” came after the NFL sent out a memo earlier this week announcing that players who aren’t fully vaccinated will be required to be tested daily for Covid-19, wear masks and refrain from leaving the team hotel or interacting with anyone outside the team when traveling. They’ll also be banned from eating with teammates, using social media or engaging in sponsorship activities. First-time violators may be fined $50,000, with punishments escalating for repeat offenses.

Vaccinated players, on the other hand, will be tested once every two weeks, won’t be required to wear masks and will be allowed to visit with friends and family members. They’ll also be able to do commercials and other sponsorship activities, use social media and move about freely while on team trips.

Beasley ripped the NFL Players Association on Thursday for agreeing to the new Covid rules. He called the union a “joke,” saying that it doesn’t truly represent the players. On Friday, he made clear that he won’t comply with the league’s new two-tiered framework.

“I will be outside doing what I do,” the Texas native said. “I’ll be out in the public. If you’re scared of me, then steer clear, or get vaccinated… I may die of Covid, but I’d rather die actually living.” He added that he won’t be deterred from getting together with family members, “regardless of protocol.”

I don’t play for the money anymore. My family has been taken care of. Fine me if you want. My way of living and my values are more important to me than a dollar.

At stake for Beasley is what remains of a four-year, $29 million contract that he signed with the Bills before the 2019 season. He’s scheduled to make as much as $5.84 million in the upcoming season and $6.1 million in 2022, according to contract data from Sportrac.com.

Beasley has much more to lose than when he entered the league as an undrafted free agent with the Dallas Cowboys in 2012, making $480,500 a year. Listed at just 5-foot-8 and 174 pounds, he was considered a longshot to thrive in a league dominated by bigger, faster and stronger players.

But Beasley has racked up more than 5,000 receiving yards and 33 touchdowns over nine seasons, and he had his best output in 2020, totaling 967 yards and four scores. Praised by Bills quarterback Josh Allen for being “tough as nails,” he played the final three weeks of last season with a broken fibula.

“I love my teammates and enjoy playing ball because all the outside BS goes out the window in these moments,” Beasley said in Friday’s Twitter post. “I just want to win the Super Bowl and enjoy these relationships that will be created along the way.”

Beasley added that many other NFL players share his views on vaccine choice, but they “aren’t in the right place in their careers to be so outspoken. I feel for you, and I’m hoping I’m doing my part to represent you guys well.”