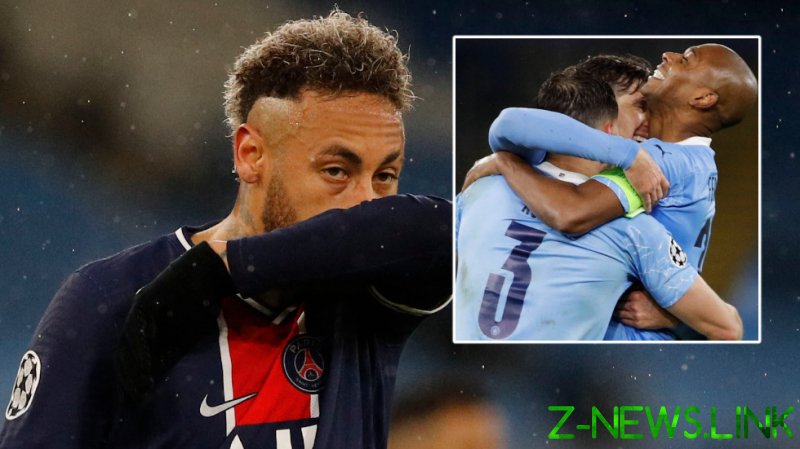 The Brazil striker’s pre-match bluster, which began immediately after last week’s 2-1 home defeat, came to nothing as last season’s finalists went out with a whimper at the City of Manchester Stadium, going out to two goals from Riyad Mahrez – a player born in France who rejected PSG as a youngster.

City had never reached the final before, and their inexperience was tested even less once Angel di Maria – formerly of City’s arch-rivals, Manchester United – was sent off shortly after Mahrez’s 63rd-minute second.

While City can look forward to the final in Istanbul at the end of the month and an imminent Premier League title, Paris must hope Lille, who are a point above them in the Ligue 1 table, slip up in the final three games of the season to give them a chance of being domestic champions again.

“We believed until the red card,” Paris midfielder Marco Verratti somewhat fancifully claimed, despite the fact that his side needed to score three goals in little more than 20 minutes at that point against a team on a run of six successive Champions League wins.

“We created a lot of chances. We played a lot better than them but then we conceded a goal from the first chance they had, like in the first leg. But that’s how it is when you play big teams.”

In reality, the main manifestation PSG’s performance has created is inevitable rumors about the most expensive player in the world’s future, which many feel could be at Barcelona, where a potential partnership with Lionel Messi would surely be an enticing option for him.

“Now let the Neymar saga begin,” said one viewer, while another added: “Get ready for a Neymar-to-Barca saga for the entire summer.”

By the time he next plays in the latter stages of the Champions League, Neymar is likely to have gone more than two years since he scored against Borussia Dortmund in a 2-0 round of 16 victory in February last year.

He is 20 goals behind Kylian Mbappe and two behind on-loan Everton youngster Moise Kean among PSG’s top scorers this season, and his strike against Lens on Saturday was his first for the club in five league matches, dating back to the end of January because of a multitude of injuries and a suspension.

Neymar would almost certainly have to accept a substantial cut to his reported salary of around $42 million in order to return to financially-challenged Barcelona, who he left for the Parc des Princes in 2017.

Coach Mauricio Pochettino was also in the mood for generously appraising PSG’s performance while dismissing the suggestion that Mbappe’s absence through injury in Manchester had impeded them.

“That cannot be an excuse,” said the new manager. “We are a team.

“Of course, it’s unlucky he was not ready to help the team, but that’s not an excuse.

“We cannot use that excuse because the performance from the team was good.”