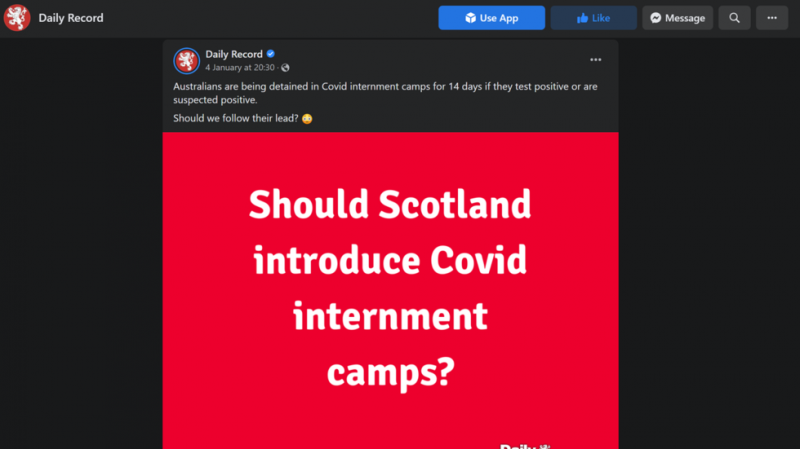 Scotland’s largest newspaper has floated the idea of creating internment camps to forcibly detain residents who have tested positive for Covid-19 or who are “suspected” of being infected.

The Daily Record tabloid queried its Facebook followers about the policy on Tuesday, noting that “Australians are being detained in Covid internment camps for 14 days if they test positive or are suspected positive.” The outlet then asked: “Should we follow their lead?”

The newspaper didn’t specify how “suspected” internments might be adjudicated, and whether it would mean locking up those who are spotted sniffling excessively, for example, or citizens who refuse to get vaccinated against Covid-19. Last month, the same tabloid reported that 35% of UK residents believe the unimmunized should be forced into lockdown “until the pandemic has passed,” citing recent polling. It suggested the survey showed strong public support for “harsher measures” on unvaccinated Scots.

The idea was met with pushback on social media. Anti-extremism activist Maajid Nawaz said the paper was, in effect, proposing “crimes against humanity,” while others noted that until recently, the notion of Covid-19 internment camps had been portrayed as a deranged conspiracy theory in corporate media coverage.

Scotland has tightened its Covid-19 restrictions amid the rapid spread of the Omicron variant, imposing lower capacity limits on indoor and outdoor gatherings, shutting down night clubs and discouraging holiday get-togethers. As the Daily Record reported on Wednesday, Scotland has 42 Covid-19 patients hospitalized in intensive-care units.

Emulating Australia would take the mitigation program to a prison-like level. When three people last month escaped a Covid-19 quarantine camp near Darwin, police responded with a manhunt to apprehend the internees, even though all three had tested negative for the virus the previous day. Police also set up checkpoints around the internment facility, which used to be a mining camp.

Though the policy has come under fire, Australia appears set to continue it, and is now building even more Covid-19 camps. Last October, Queensland Deputy Premier Steven Miles told Australia’s ABC News that there will be a “continuing need” for quarantine compounds, partly to accommodate visitors who haven’t had access to vaccines. He added that “more secure” facilities will be needed for returning Australians who don’t meet the strict criteria to qualify for home isolation.