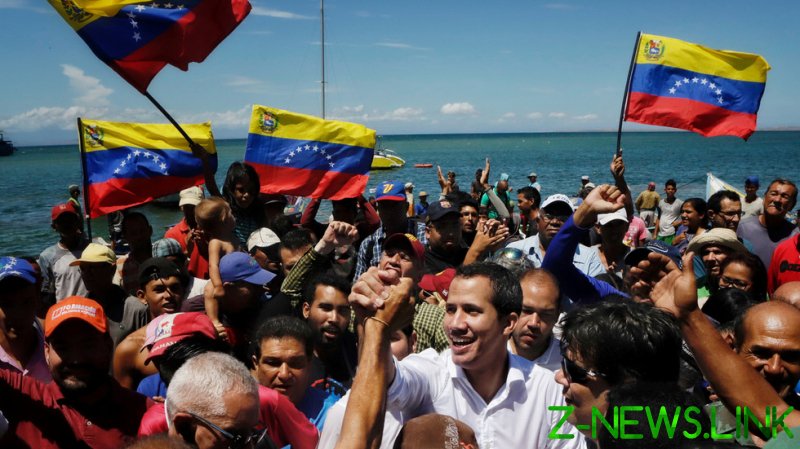 Documents released to researchers under the US Freedom of Information Act have revealed how US intelligence fronts weaponized social media to promote Venezuela’s right-wing opposition, and assist their election to parliament, thus laying the foundations for Washington’s appointment of Juan Guaido as the country’s leader in January 2019.

The files indicate that in October 2013, seven months after the death of popular socialist President Hugo Chavez, the National Democratic Institute (NDI), a US intelligence front that funds and supports political parties abroad, was provided almost $300,000 by the National Endowment for Democracy (NED) – a US government agency avowedly created to do overtly what the CIA had previously done covertly – for a program titled ‘Venezuela: Improved Training and Communications Skills for Political Activists’.

Opposition elements in the country were said to have “particular challenges in communicating with citizens as well [as] organizing and mobilizing supporters” via traditional information platforms. But social media had “proven less vulnerable to government restrictions and can be a useful tool” for individuals to “vocalize their frustrations with public policy issues, highlight instances of corruption, connect with like-minded people, and offer alternative perspectives to official news sources.”

Sizable state investment in technology resources by the Chavez government and the late president’s “prolific use of Twitter” were noted to have helped increase access to – and significantly popularize – the internet, creating an information environment ripe for malign exploitation. However, “many political activists” were said to have “limited exposure” to digital communications’ best practices, and needed “additional technical assistance and support in order to effectively use social media.”

Sections of the document related to “program objective” and “proposed activities” are respectively fully and heavily redacted, although the goals and dimensions are fairly clear. For one, NDI hosted a seminar outside Venezuela at some point prior to 2013’s municipal elections in December, providing “expert advice” on using technology and social media “for citizen outreach and engagement,” while hiring a consultant to provide “ongoing coaching” for participants, and “individualized assistance” to an elite group of eight beneficiaries who had “[demonstrated] an ability to engage and influence others.”

These seminars would allow participants to “interact with one another, and solicit feedback from the instructor,” with “individual strategic planning sessions facilitated by NDI consultants” helping them to “design strategies for online citizen outreach, engagement, and information dissemination” ahead of the forthcoming vote.

Moreover, the NED created a “virtual toolbox” providing “online customized capacity-building courses on a range of issues relating to political innovation” – dubbed Red Innovacion, it remains active today. After the elections were over, a second review session was hosted in Venezuela “to develop longer-term strategies to maintain contact with citizens.”

Fast forward to Venezuela’s legislative elections two years later, and opposition coalition Mesa de la Unidad Democratica (Democratic Unity Roundtable, MUD) won a historic National Assembly majority, the first time opposition parties had done so since Chavez came to power in 1999. Juan Guaido was among the intake, securing 26% of the vote in Vargas, an impoverished area of the country home to many state-run companies, employing the majority of the local population. Chavista candidates had in preceding elections typically run unchallenged.

It’s unknown if he was among the octet who exhibited a pronounced “ability to engage and influence others” selected by NDI to receive “individualized assistance” in online campaigning, but in 2015 he was one of several opposition activists who allegedly went on hunger strike over the purported threat of the government canceling the planned legislative election. This effort was heavily promoted on social networks, and in turn widely covered by the Western media.

Whatever the truth of the matter, it’s clear that NDI’s social media meddling played a pivotal role in the 2015 election’s shock result.

A review published by the Institute boasts of the extensive support it provided to MUD in the years leading up to the vote, including “creating a database of voters to identify soft [socialist party] supporters and swing voters,” who were then organized “into specific categories for targeted messaging.” This allowed the coalition to “[customize] its outreach to swing voters of all leanings with a high degree of specificity.”

“The creation of such a large, detailed database able to predict the political leanings of over 3.5 million voters required a heavy investment of time, intense planning and a structured roll-out,” NDI revealed. “MUD carried out its social media campaign on Facebook, which targeted voters with different messages taking into account their political leanings.”

Some voters received “get-out-the-vote” messages, others were targeted with damaging information about socialist candidates, “designed to draw them across the aisle.” The database also allowed MUD to identify 8.5 million voters on Facebook and deluge them with “similarly specific messaging,” with metrics indicating that by election day, the coalition’s assorted digital campaigning efforts had reached 6.3 million voters, with 2.9 million Venezuelans having interacted with its Facebook content at least once.

Details of conspiracies to meddle in foreign elections are rarely spelled out so bluntly and openly, although that Washington has embraced the digital realm in order to destabilize the government of Venezuela should come as no surprise. After all, there is no sphere or resource US intelligence services seemingly won’t attempt to weaponize in order to destroy socioeconomic progress in the audacious Latin American country.

In 2010, WikiLeaks published a US embassy cable from four years prior in which the American ambassador to Caracas outlined a five-point cloak-and-dagger strategy for “penetrating Chavez’ political base,” “dividing Chavismo,” “protecting vital US business,” and “isolating Chavez internationally.” USAID’s Office of Transition Initiatives (OTI), which “provides fast, flexible, short-term assistance targeted at key political transition” –  i.e. regime change – was central to these efforts.

OTI’s activities in Caracas included supporting over 300 NGOs across the country “with technical assistance, capacity building, connecting them with each other and international movements, and financial support upwards of $15 million.” Some of the NGOs were said to have been specifically launched off the back of USAID funding, including initiatives “dealing with the rights of the handicapped,” and “civic education” enterprises.

It can only be considered a shocking but predictable indictment of the mainstream media that the revelations contained in these documents have been ignored by the very same journalists who, for so long, have peddled laughable claims of Russia having influenced the outcome of the 2016 US presidential election via puerile social media ads no one actually saw.