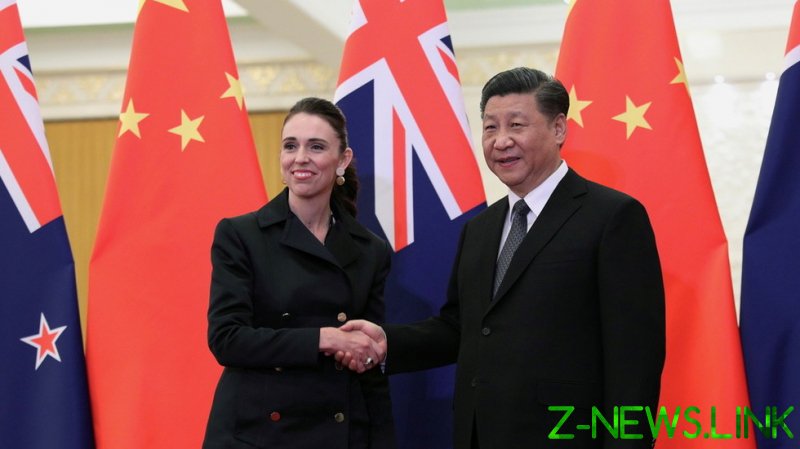 Ardern was prompted several times to take a stance on the confrontation between the US and China during an interview with NBC’s Chuck Todd. One question was whether New Zealanders see China as an “ally or adversary,” to which the prime minister said her people will not “determine our relationship with any country in such stacked terms.”

China is New Zealand’s biggest trading partner, which, Ardern said, does not inhibit her country from criticizing Beijing when it sees fit.

Commenting on the rift that New Zealand’s neighbor, Australia, has had with China after siding with the US in its great power competition against Beijing, Ardern said these tensions “will not change the way we behave.”

“It’s important to us that we continue to have… integrity, to raise those issues that concern us,” she said, adding that her country will use established mechanisms like the World Trade Organization to resolve trade disputes “regardless of what happens in diplomatic circles.”

Asked by Todd whether she thinks Biden’s America is “still the leading democracy in the world,” Ardern said the US “has an incredibly important role to play in the Pacific region.” She added that Washington should have greater engagement, not just in terms of “issues viewed through a strategic defense lens.”

“We would really welcome the US presence in some of that economic architecture, increasing those trading relationships in our region. We welcome any signaling that demonstrates that that’s where the US is heading towards,” she said.

The Trans-Pacific Partnership (TPP) free trade agreement, which the US abandoned under former President Donald Trump, and which China is seeking to join in some form, is a model for multilateral trade agreements, Ardern said. Any nation willing to accept the standards set out in the TPP would be welcome to join, she said.

Todd asked if there is any line that, if crossed, “New Zealand or any other country” would not trade with a nation based on its human rights record. Ardern replied that “value judgements” are embedded in the TPP itself.