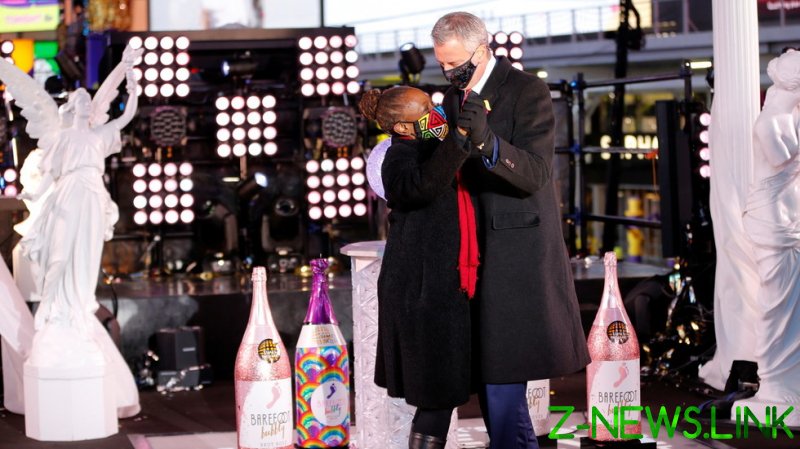 De Blasio was one of the select few allowed into Times Square in New York City on New Year’s Eve. While it is almost always bustling with people as crowds gather to watch the famous ball drop, this year saw police barricading the area off and officials telling people to enjoy the festivities on television due to the coronavirus pandemic.

The mayor angered many, however, when he was seen celebrating and dancing with his wife. The visual has not sat well with his critics, who struggled in 2020 to control rising crime rates – 447 homicides this year, making it the deadliest in 10 years – and spikes in Covid-19 – over 25,000 deaths and 430,000 cases. Many have also protested the mayor for the city’s strict lockdown restrictions, which have kept numerous businesses closed.

“Mayor DeBlasio and wife celebrate the New Year by dancing in Times Square on the graves of all the closed businesses,” conservative pundit Lori Hendry tweeted in reaction to video of the mayor’s good time ringing in the new year.

“He closed down Times Sq for his personal use. And the idiots in NYC voted for this,”added journalist John Cardillo.

De Blasio even found himself a target of criticism on the night of New Year’s Eve as Andy Cohen, who was co-hosting holiday festivities for CNN, saw the mayor dancing and expressed disgust on live television.

“Do something with this city! Honestly, get it together!” he later shouted at the mayor.

Before making his way to Times Square, de Blasio warned residents to stay home, but he promised New Year’s Eve would be a “joyous night, if ever there was one.”

Juanita Holmes, chief of patrol for the NYPD, told New Yorkers to enjoy the festivities from “the comfort of your own home.”

“I can’t emphasize enough how important it is for everyone to stay home,” she said.