Home / WORLD / New York has dropped hundreds of George Floyd riot charges. Is it any wonder crime is once again soaring in the Big Apple?

New York has dropped hundreds of George Floyd riot charges. Is it any wonder crime is once again soaring in the Big Apple? 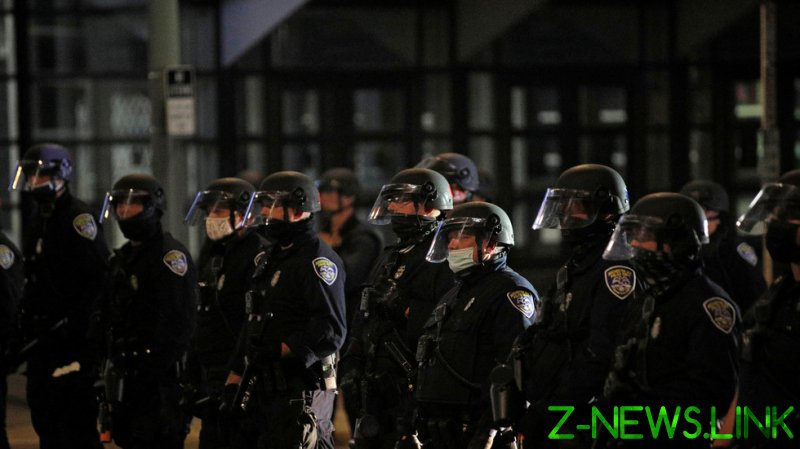 Shootings, murder, violent assaults on the subways are all on the rise, and the Guardian Angels are back on the streets to try to stem the tide. This is what happens if you give criminals an invitation to loot – and worse.

Once-progressive New York City is about to get much less so as Mayor de Blasio’s administration scampers terrified out the back door. Afraid that efforts to fix the city’s explosion in crime will be seen as racist, the mayor has largely kept his hands off the wheel, exacerbating the chaos.

Voters have had enough of the crime spree, however. They’re quietly but defiantly thinking of little more than their own safety, whether or not their balcony sports a “Black Lives Matter” banner. The city has dropped hundreds of charges of rioting and looting stemming from the George Floyd riots last summer, essentially telling New York’s troublemakers that it’s open season on luxury retail – and pretty much every other establishment as well. How did the city disintegrate so rapidly – and where are the people who are supposed to stop it?

The exodus of both police and residents from certain areas – including SoHo, where some of the worst retail devastation took place – has been spurred on in more recent months by de Blasio’s apparent apathy toward the upsurge in crime. The mayor appears to be washing his hands of responsibility ahead of stepping off the podium for good, while most of his would-be replacements are hardly stepping up to the plate to fix the problem. Unfortunately, most seem to hold the same level of apathy toward burgeoning crime – possibly because relatively few of them lived here decades ago, the last time the city plunged into an abyss of crime.

Frustrated by their inability to take action against the scourge in crime, or to do anything more than sit quietly at their desks while the city regresses into the Bad Old Days of the 1970s and crime spikes all around them, some city law enforcement are even opting to take matters into their own hands. De Blasio doesn’t seem to care, instead offering lackluster praise when one of his cops kicks a protester’s head in – a real, peaceful protester, not a rioter. Officers tend to steer clear of anything that might amount to a fair fight.

With lockdown regulations fading into the rearview mirror, those New Yorkers returning to their homes ahead of November’s mayoral election are also facing something of a rude awakening. The warm fuzzy urban theme-park vibe that had characterized the city for so many years has been subtly supplanted by the real-life violence that residents who lived there from the 1970s through the 1990s remember well. A looming identity crisis has the city in its grasp, rendered all the worse due to Governor Andrew Cuomo’s sadistic “no music, no singing, no dancing” rules – banning all the good things about the city and leaving the restless masses without a note of music to soothe their inner savage beast.

One symbol of a return to the “bad old days” is the resurgence of the Guardian Angels, a civilian defense group notable for their red berets and willingness to beat the crap out of – or “make a citizens’ arrest of” – anyone starting trouble on the subway trains. The one difference this time around is that Curtis Sliwa, the Angels’ leader, isn’t just bringing down the hammer of justice on a civilian basis – he’s running for mayor on the Republican ticket.

“There were more major felonies in the past 12 months than in the last year,” a shocked-sounding Sliwa told Vice Magazine four years ago, pointing to “several” subway slashings and vowing that it was “time to make a comeback. The situation has only spiraled downward since then, and the Angels have come back, “guarding” the city against the coronavirus epidemic after noting that crime had surged 15%.

The problem has metastasized dramatically, helped along by the inability of Mayor de Blasio to get along with his police force. Violent felonies on the subways rose from 64 in April to 116 in May, more than three times higher than in 2019; the murder rate is 53 per cent higher; and shootings are up 77% – small wonder that a recent poll showed 52 per cent of New Yorkers are worried about crime.

Despite being disparaged as “vigilantes” when they first were active, the Guardian Angels made a positive impact on troubled neighborhoods, according to residents – though their tactics of robbing crack dealers, taking their money to soup kitchens, and destroying their drugs in front of them, were somewhat unorthodox.

2021 is not 1979, however, and authorities walk on eggshells around criminals lest they be labeled “racists” or otherwise accused of bigotry. Although bad and rising, crime is nowhere near what it was back then, even though to hear Sliwa and his compatriots talk, the bad old days are right around the corner.

Certainly some of the bad elements are coming back – it’s not unusual to witness an open-air drug transaction on the street anymore – and Sliwa insists his group’s resurgence has been welcomed by New Yorkers. His nomination as the Republican candidate for mayor speaks to a desire for law and order among the disintegrating city, specifically from those who remember how bad things could get.

New York isn’t the only city collapsing under the weight of its own wokeness, of course. San Francisco has backed away from punishing shoplifters entirely for any goods under the value of $1,000, and the store’s retail crime division has been forbidden from pursuing thieves because they had become “too dangerous.”

As a telling aside, San Francisco experienced twice as many fatal drug overdoses as it did Covid-19 deaths, and thieves realized they could essentially get away with anything. Over a period of four years, CVS in San Francisco closed 17 stores due to out-of-control shoplifting. The goods stolen from the stores are sold brazenly in open-air markets, according to observers, a trend going back at least five years.

“It has become part of the landscape,” Ahsha Safai, a member of the city’s Community Board, lamented last month, noting that “people say, ‘oh well, that just happens’” when confronted with their thievery. “If there are no consequences for their actions, then you invite the behavior. Over and over.”

There are, of course, those eternally patient souls willing to martyr themselves so that some hood rat can grab a few sticks of deodorant. Sliwa has scoffed at New York’s efforts to “defund the police,” essentially considering it capitulation to the problem he’s been fighting for decades, and many voters – not least those on the right – agree. New Yorkers are now looking fearfully to the West Coast, concerned their city might follow down the same path as San Francisco.

And even those New Yorkers who have only arrived in the city recently have been taken aback by the behaviors they’ve witnessed in the streets. Those who’ve arrived in search of the city’s reputation as a party town are baffled – no parties allowed, says the governor, as hordes of well-armed cops kick in the doors of college parties – but real crime goes unaddressed, with innocent people being pushed onto the subway tracks, sucker-punched from behind, and suffer other seemingly random acts of cruelty.

No one wants a police state, but by all measures New Yorkers are already living in one where crime is blighting their lives – attacked on one side by criminals and on the other by police. Whoever becomes the next mayor, their first task should be to reorient officers in the direction of fighting actual crime. There’s no reason the country’s best-funded police force should be languishing in such utter dysfunction.