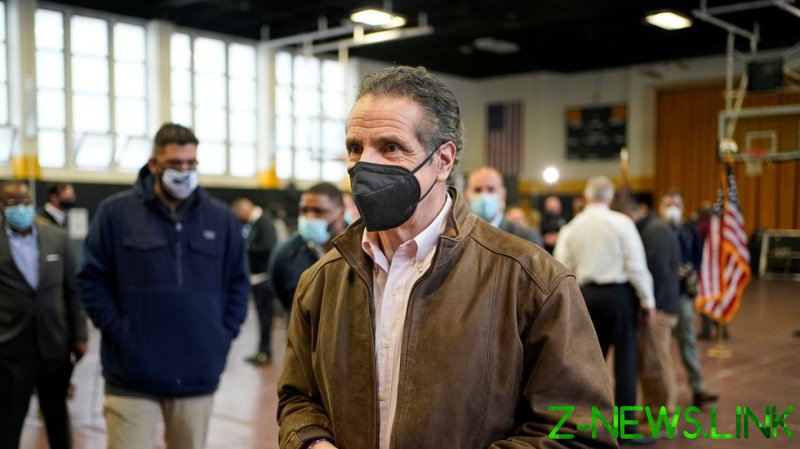 Democrats, who have supermajorities in both the New York Assembly and the state Senate, reached an “informal agreement” on a bill that would strip Cuomo of the powers he was granted last year to deal with the coronavirus pandemic, Bloomberg reported on Tuesday citing Assemblywoman Patricia Fahy of Albany.

Any modifications or renewals of Cuomo’s coronavirus edicts would reportedly have to be approved by the legislature.

The bill is yet another setback for Cuomo, who spent the past year basking in media praise over his handling of the pandemic, received an Emmy award for his virus briefings, and even published a book about leadership in the fight of Covid-19.

Cuomo’s current troubles, however, are not related to the revelations that he and his aides hid the real numbers of deaths in nursing homes – a direct result of the governor’s orders mandating them to accept coronavirus-positive patients – from the Department of Justice.

Instead, the media and the Democrats are focusing on the series of accusations of sexual harassment and assault from at least three women – including a member of President Joe Biden’s 2020 campaign team.

After the third accuser came forward on Monday, Rep. Kathleen Rice (D-New York) called on Cuomo to resign. Two state senators and one assemblywoman – Democrats all – have made the same demand.

At a joint press conference with House Speaker Nancy Pelosi (D-California) on Tuesday, Democratic Caucus chair Hakeem Jeffries (D-New York) stopped short of calling for Cuomo’s resignation, but said there “needs to be a full, thorough complete, and serious investigation” into the sexual harassment claims.

It “doesn’t seem to me that there’s any political motivation” behind the claims, Jeffries added. Pelosi said she “associates” herself with Jeffries’ comments.

The probe into Cuomo’s conduct with the three accusers – two of whom are the governor’s former staffers – is being handled by New York Attorney General Letitia James, also a Democrat.

Having denied all accusations at first, on Sunday Cuomo apologized for being “playful” and making “jokes,” saying that he “teased people about their personal lives, their relationships, about getting married or not getting married. I mean no offense and only attempt to add some levity and banter to what is a very serious business.”

The half-apology was rejected by critics as “gaslighting.”

While the governor’s fortunes within the party may seem bleak, the Democrats’ push to investigate Cuomo and curb his powers has focused on the sexual harassment charges, while ignoring entirely the thousands of nursing home deaths.

This has prompted some critics to speculate that the ‘MeToo’ charges are intended to take down Cuomo alone, while covering for other Democrat governors – Michigan’s Gretchen Whitmer, California’s Gavin Newsom, New Jersey’s Phil Murphy and Pennsylvania’s Tom Wolf – who did the same thing with the nursing homes, with the same lethal result.