Home / WORLD / New ‘United States of Al’ features Kabul airport chaos, but were producers influenced by the US Marine Corps?

New ‘United States of Al’ features Kabul airport chaos, but were producers influenced by the US Marine Corps? 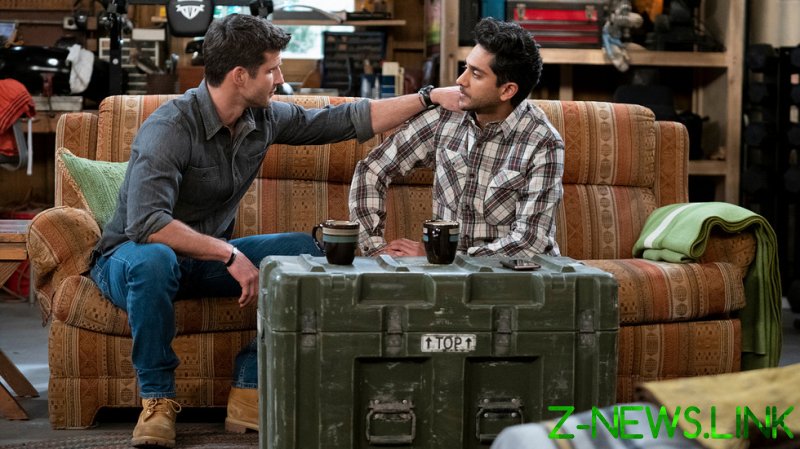 The sitcom centres on Al, an interpreter from Afghanistan who relocates to Columbus, Ohio and moves in with the family of Riley, a Marine Corps veteran he worked with in Afghanistan.

The low-brow nature of this premise is epitomised by the third episode, when Al becomes unnerved by his female driving instructor wearing shorts, which is forbidden by Al’s religion. While he manages to momentarily overcome his absurd fundamentalism, during a driving lesson he becomes nervous again after stopping near a charity car wash run by women in bikinis.

While some critics praised the show for embracing diversity and cultural representation, other reviewers pointed out that casting Adhir Kalyan – an Indian from South Africa – to play an Afghan, with a thoroughly inauthentic accent and no knowledge of the country or culture, was hardly a victory for diversity advocates.

The show has also been accused of being military propaganda, leading executive producer Mahyad Tousi to tweet out a response denying this, and saying it is “mined from deep research and interviews with dozens of folks who have walked in these shoes.”

Beneath the quagmire of Twitter arguments, a copyright challenge may be brewing. Marine Corps veteran turned screenwriter Dylan Park alleges that the series was cribbed from his own real-life experience of reuniting with a translator he knew from his time in Iraq. Park had previously tweeted about this, and said his story had been shopped around Hollywood and even optioned, but was never made. Then, after Park had been hired by CBS as a writer, he saw the press release for ‘United States of Al’ and said, “they totally ripped off my story and turned it into a racist comedy.”

Interestingly, Park is currently writing on ‘68 Whiskey’, a comedy-drama about Army medics in Afghanistan. In another Twitter thread he outlined the crazy story of how a writer on season one of the show had pretended to be a four-tour Purple Heart captain in the Marine Corps, but she was gradually exposed as a fraud.

Park said that it wasn’t until he checked on her background, and found that she had no military records whatsoever, that the scam was uncovered. Even then, he said, the writer was paid up and let go, with the studio and network apparently not wanting to draw attention to how they had been conned in their search for military authenticity.

The first season aired in April-June this year and was due for a re-run in August, but that was yanked from the schedules due to the Taliban’s hostile retaking of Afghanistan. A spokesperson for CBS said the cancellation was “out of sensitivity to current events” but wouldn’t confirm whether the show was still going to return for another season.

CBS evidently decided that overwhelmingly negative reviews, political controversies, and accusations of racism and militarism weren’t a good enough reason to simply flush this televisual turd, and so Al is back for a second run.

The new season got off with a bang, focusing on efforts by Al’s relatives to flee Afghanistan in the wake of the US withdrawal of ground forces.

The episode is set over several days in August, and includes several panicked phone calls between Al and his family in Afghanistan. As the Taliban’s takeover accelerates across the country, his relatives become ever more desperate to escape. Much of the dialogue comes across like it was written for a propaganda newscast, with one relative exclaiming, “We were making progress here, now it’s all disappearing.”

In one scene, Riley – the Marine that Al lives with – loses his temper, ranting at the TV for reporting on American football, instead of wall-to-wall coverage of the Afghan chaos. Given the almost total absence of coverage of Afghanistan on US news in the decade prior to the events in August, this scene is ironic in the extreme.

In the final analysis, the show offers the audience two options: racist stereotypes, or weaponised sympathy for Afghans being deployed against the Taliban. Afghans are depicted either as backward simpletons or figures for compassion, but only as long as that compassion fits in with US geopolitical priorities.

The question is, what inspired this episode? Was it merely a case of responding to events as they unfolded on the ground?

This second season began filming in August, but the first episode was hastily rewritten to address what was happening in Afghanistan.

Military veteran turned Hollywood consultant Chase Millsap, who works on ‘United States of Al’, wrote an op-ed explaining: “Narratives have power. They help define who we are as a nation. Being a military consultant and writer on United States of Al hasn’t been just about showing an actor how to wear a uniform or hold a weapon. It’s reminding our writers that our characters represent real people, real stories and the real consequences of war.”

However, lurking behind the scenes is another influence – the US Marine Corps themselves. Documents obtained from their entertainment liaison office, which was housed at Camp Pendleton but appears to have moved back in with the other military branch offices in Los Angeles, reference ‘United States of Al’.

The documents were released in response to a Freedom of Information request, and summarise what the Marine Corps were doing in Hollywood throughout 2020, a fairly quiet year in the entertainment business due to Covid-related production shut downs.

Nonetheless, they detail how before season one had even started production, the producers were consulting with the Marine Corps, and looking to visit the office at Camp Pendleton, presumably to get help and ideas for the show. The trip was originally slated for March but had to be moved to June due to lockdown restrictions.

The exact purpose of this visit isn’t made clear by the Marine Corps summaries, but the documents state the overall mission of the entertainment liaison office: “The office will build and maintain relationships with members of the industry to portray the Marine Corps as a Naval Force with authenticity, reinforce our core values and increase awareness of the Corps to the American people and international audience in order to achieve the communication objectives of the Commandant of the Marine Corps.”

No doubt, a show featuring a former Marine who befriends and takes in an Afghan interpreter, teaching him the American way of life and how to abandon his former beliefs, attitudes, and culture, and embrace the West, meets this mission statement.

Likewise, starting season two with what is effectively a plot drawn from Pentagon and White House talking points on Afghanistan, focusing on generalised sympathy for Afghan citizens rather than delving into how they got here, and what role we played in their fate.

The Marine Corps could hardly ask for more.