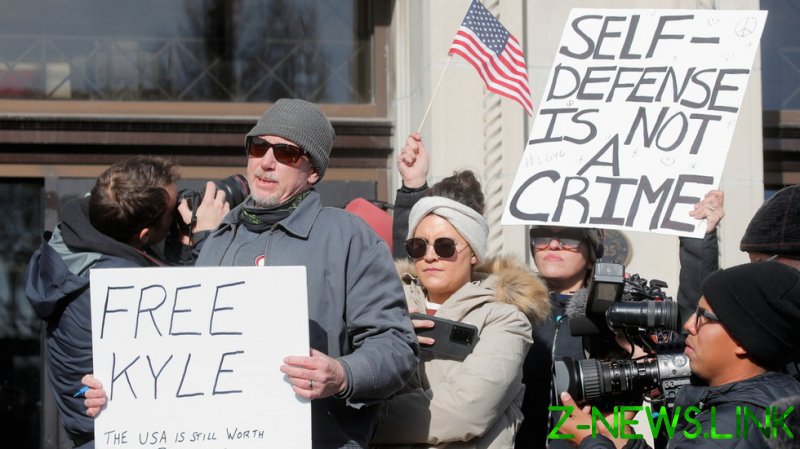 Introduced on Tuesday by State Senator Nathan Dahm, a Republican who is running for the US Senate, ‘Kyle’s Law’ would force Oklahoma to cover the legal fees and damages incurred by anyone accused of murder but found to have been acting in self-defense, if the defendant could prove they were the victim of “malicious prosecution.”

“With the Kyle Rittenhouse trial we’ve seen the impact prosecutors can have on our rights being attacked & possibly taken away for political reasons,” Dahm tweeted, adding that his new legislation would also make prosecutors “personally liable” for pursuing such cases.

Last week, a Wisconsin jury found Rittenhouse not guilty of first-degree homicide, attempted homicide and reckless endangerment, charges stemming from his shooting dead of two men and wounding of another during Black Lives Matter protests in Kenosha, Wisconsin last August. All three shootings were captured on video, and this footage combined with witness testimony convinced the jury that Rittenhouse acted in self-defense.

The template for ‘Kyle’s Law’ was drawn up by Andrew Branca, an attorney specializing in the law of self-defense, in the wake of Rittenhouse’s acquittal. Branca’s proposed law would be groundbreaking in that it would compel prosecutors to personally compensate defendants and their families for mental and emotional distress and reputational damage suffered during a case.

At present, no state has such a law on its books, while only one – Washington – allows the victims of such prosecutions to claim compensation from the state.

“Only by holding the state generally and the prosecutor personally both responsible for such cases of unjust persecution of self-defense cases can we keep these victims of violent attack from also becoming victims of an assaultive justice system,” Branca wrote.

While Dahm is currently attempting to convince more Oklahoma lawmakers to co-author his bill, it likely stands a better chance of becoming law there than elsewhere. Oklahoma has a Republican governor, is considered a gun-friendly state, and the GOP controls both houses of its state legislature by wide margins.