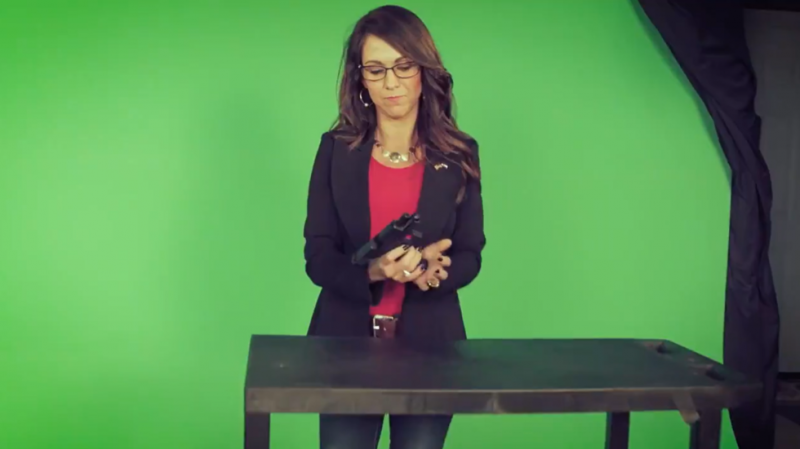 “Not only is it my right, but it’s a right I was sent here to protect,” Boebert said in a video posted Sunday night on Twitter. The video shows the congresswoman chambering a clip and holstering a semi-automatic pistol in the back of her waistband, under a blazer, then walking on the streets of Washington as she discusses why she will carry a gun on Capitol Hill.

“Even though I now work in one of the most liberal cities in America, I refuse to give up my rights, especially my Second Amendment rights,” Boebert said. She added that as a mother-of-four who’s just five-foot tall and 100 pounds, “I choose to defend my family with all of the force the Constitution provides.”

Boebert, who also cited Washington’s high crime rate, has a history of making provocative statements about guns. Just last month, she tweeted: “I’ve always heard to ‘speak softly and carry a big stick.’ I prefer to speak loudly and carry a Glock.” She also said she provides mandatory firearms training and target practice for employees at her restaurant, called Shooters, in western Colorado.

After Boebert’s latest pro-gun brashness, reporters asked Washington Police Chief Robert Contee about the new congresswoman’s plans. Members of Congress are allowed to carry a gun on Capitol grounds, but Contee said he will inform Boebert that she’s subject to the same penalties as anyone else if she’s found with a concealed firearm elsewhere in the city.

The District of Columbia has strict gun-control laws. A member of Congress is permitted to carry a gun at the Capitol, as long as it’s stored in the lawmaker’s office and unloaded while being transported.

Ryan Scott, chief technology officer for an augmented-reality new application called CrimeDoor, mocked Boebert for feeling the need to carry a gun to Congress. “If you had the benefit of good arguments, you wouldn’t need guns,” he said. “What a bunch of cowards.”

But Boebert shot back, saying: “Were the founding fathers, who made guns the second point in their argument for the foundation of this country, also a ‘bunch of cowards’?”

Others, such as gun-control activist Shannon Watts, reacted to Boebert’s new ad by tweeting about her and her husband’s arrest record. Still others suggested that she’s irrational for thinking that DC is unsafe. Homicides in Washington rose to a 15-year high in 2020, and the city’s murder rate has historically ranked among the 10 highest in the US.