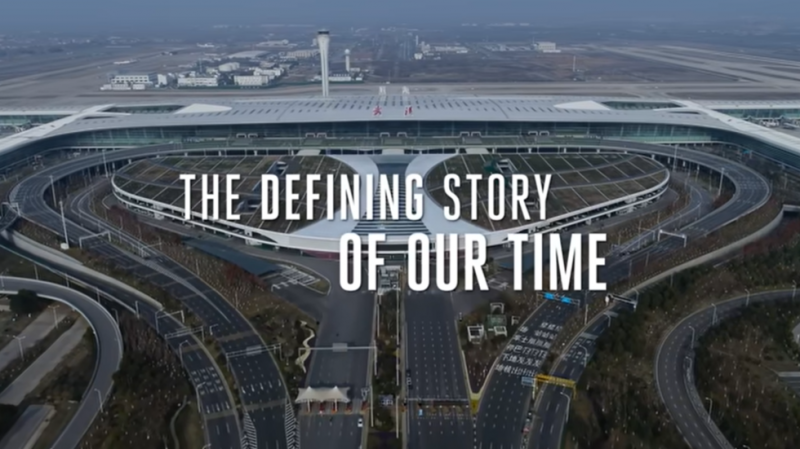 The Covid pandemic has been a difficult time for all of us – except, of course, for documentary filmmakers, who seem to be living through the most booming of boom times.

In recent months, two much-hyped HBO documentaries – Spike Lee’s‘NYC Epicenter: 9/11 – 2021 ½’and Nanfu Wang’s ‘In the Same Breath’ – have attempted, mostly unsuccessfully, to tackle the tantalizing topic of the Covid pandemic.

Now Netflix is getting into the Covid documentary game with Oscar-winning director Orlando von Einsiedel’s ‘Convergence: Courage in Crisis’, which began streaming on Tuesday, October 12.

The film’s thesis is clearly stated as “While Covid-19 exacerbates vulnerabilities across the world, unsung heroes in all levels of society help turn the tide toward a brighter future.”

If one wants to truly understand the intellectual impotence and manufactured manipulation of ‘Convergence: Courage in a Crisis’, one need only watch the final few minutes, as it concludes with a montage of ordinary folks from across the globe singing the song ‘Lean on Me’ in unison.

This scene sparked my PTSD and I began having ferocious flashbacks to the cringe-fest that was the bevy of self-righteous Hollywood celebrities singing John Lennon’s saccharine anthem ‘Imagine’ back in the Spring of 2020. Yikes.

What precedes that sanguine rendering of ‘Lean on Me’ is just as contrived, and seems just as fake as the sing-along itself.

‘Convergence’, like seemingly every other Covid documentary, is devoid of insight because it’s incapable of actually focusing on Covid, and instead uses it as a delivery system for its various political, social, and cultural agendas.

For example, the film follows the stories of nine different people/couples as they navigate the peril of the pandemic, selflessly help others, and fight the disease. These folks live across the globe in London, Miami, Delhi, Tehran, Sao Paulo, Lima, Oxford, and Wuhan, and do such varied things as treat the sick, clean hospital rooms, drive doctors to clinics, and take ambulances into poor neighborhoods.

Apparently, though – according to ‘Convergence’,anyway – the only people who were both deeply affected by Covid, and also who fought most valiantly against it, were people of color, as they make up eight of the nine stories.

The lone white face featured in the film is Oxford vaccinologist Professor Sarah Gilbert, and she gets minimal screen time, treated more as an inconvenience to the film’s thesis than as a story worth watching.

A strange example of the film’s political bent is found in the story of Hassan Akkad, a Syrian refugee living in London. Akkad gets a job cleaning the Covid ward in a hospital and uses social media to protest the British government’s decision to not include immigrants like him, working as porters and janitorial staff in hospitals, in their “bereavement scheme” – which would grant “indefinite leave to remain” status for the family members of any immigrant workers who died from Covid.

According to Akkad, the Assad regime tortured him and is currently bombing hospitals – a claim which should be taken with a grain of salt, considering director von Einsiedel’s documentary ‘The White Helmets’ is dubious in its veracity. But even though Akkad is living a good life in London, instead of being grateful he complains that he and his girlfriend deserve better immigration “status.”

Another example of the film’s insipid ideology is that it declares Covid isn’t the only pandemic around; that there are also pandemics of inequality, racism, poverty, and “misguided nationalism.” How original.

Of course, George Floyd and Black Lives Matter get a good bit of attention, mostly through the story of Dr. Armen Henderson, a black physician and activist in Miami.

When Henderson gets “racially profiled” by a cop in front of his own house during the pandemic, and his daughter witnesses the event through security cameras, he claims the incident “robbed his child of her innocence.” I’m no fan of the law enforcement community, but if you’re concerned about the loss of innocence of black children, blaming the police is about as obtuse as it gets when you consider black on black violence and the eroding morality and ethics of the wider culture.

Dr. Henderson dreams of a sort of utopia of equity being born out of the dystopia of Covid, a notion also favored by World Health Organization Director-General Dr. Tedros Adhanom Ghebreyesus. He goes so far as to proudly espouse the eye-rolling slogan “Build Back Better” and claims that “opportunities are born from crisis.”

That same sort of sentiment is how we got the War on Terror and the atrocity of Iraq and Afghanistan in the aftermath of 9/11, and got billions in bailout money to Wall Street in the wake of the financial collapse of 2007/08. If past is prologue, the idea of using Covid as a catalyst for some great change that will usher in a glorious world of wonder is a chilling proposition, which will only further empower the powerful and enrich the wealthy.

Ultimately, I found ‘Convergence’ to be an infuriating and emotionally manipulative exercise that decided to use Covid as a cudgel to divide people rather than unite them, thus deceptively reinforcing the status quo.

Covid doesn’t discriminate; it affects everyone. And, contrary to the propaganda of this documentary, we’d be better off looking beyond identity when it comes to solving big problems. Because once something becomes about identity, it stops being about anything else, most especially the truth. The insidiously manipulative and meaningless ‘Convergence’ is glaring proof of that.