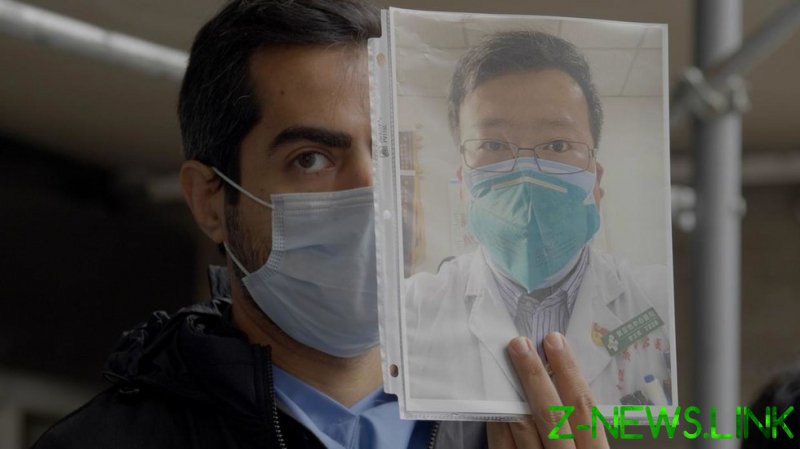 ‘In the Same Breath’, which is airing on HBO and HBO Max, chronicles the inept response and often deceptive practices of both the Chinese and US governments in the early days of the Covid-19 pandemic, and the power of propaganda to shape perception.

The documentary features some harrowing, horrifying footage from within Wuhan during the height of the Covid outbreak. Scenes of patients gasping for air and dying, andfamilies struggling to decide whether their elderly mother should die in a hospital parking lot waiting for care that will never come or admit death’s inevitability back in the comfort of their apartment, are gut-wrenching.

One of the most unnerving sequences in the film is when a CCTV camera captures the very beginning of the pandemic, when it records a cavalcade of people from the Wuhan fish market coming to a clinic with a cough and high fever. The doctor who greets and treats them then develops the same symptoms and goes from hospital to hospital looking for care, but is turned away every time, and later dies.

Director Nanfu Wang, best known for her searing documentary ‘One Child Nation’, about China’s one child policy, obviously has insights into the Chinese mindset and she is unforgiving when it comes to the Beijing government.

‘In the Same Breath’ spotlights the relentless drumbeat of misinformation from the Chinese government that at first diminished the disease’s power, with officials declaring it doesn’t transmit from human to human and dissenters arrested. When the truth became undeniable, the government shifts into propaganda mode and stories of brave frontline medical workers flood Chinese TV, with the message that the government and people are working hand in hand to defeat the Covid menace that has taken hold.

Wang, an American citizen born and raised in China, is a skilled documentarian who has a keen eye for Chinese propaganda, but a bit of a blind spot for her own US political bias.

The two main villains of ‘In the Same Breath’ are the corrupt Chinese government and Donald Trump’s incompetent administration. Both are deserving of scorn, but in the American side of the coronavirus pandemic story at least, this documentary feels a little shallow as it isn’t just the Trump administration that has misinformed and deceived regarding coronavirus, it’s been the entire political and media establishment.

The documentary almost seems quaint when it ponders potential Trump authoritarianism, when in his absence vicious tribalism and Covid misinformation have continued to flourish unabated.

To her credit, Wang does briefly highlight some Democrats as being misinformation agents too, and excoriates Dr. Anthony Fauci, for his repeated deceptions, especially early in the outbreak.

What Wang doesn’t do is challenge the orthodoxy of HBO’s decidedly liberal audience. For example, the scientists and medical professionals who signed a letter in the summer of 2020 saying that protesting against the lockdown was dangerous, but that protesting for Black Lives Matter was mandatory – because of the alleged epidemic of racism in America – are not even mentioned, never mind ridiculed. This egregious event is tailor-made for Wang’s thesis, but is undoubtedly a bridge too far for the bigwigs at HBO and their viewers.

Wang’s main focus is that she’s afraid of what people in power will do to maintain and expand their power, especially during a pandemic. She highlights China’s numerous authoritarian abuses and the Chinese people’s acceptance and outright praise for them to make her case.

This all seems very relevant to the hotly debated vaccination issue here in the US, but unfortunately ‘In the Same Breath’ only covers 2020, so that is never raised.

I’m devoutly agnostic on the vaccine question, but it’s striking to me that the same Chinese tactics and techniques regarding Covid featured in the documentary are currently either being copied or mirrored by the elite in the US.

For instance, Wang makes a strong case that China has undercounted the number of dead in order to make the government seem more effective, turning a possible 30,000 dead in Wuhan into just 3,000.

In contrast, the US corporate media have used a bait and switch approach where the highest number is always the one featured, possibly in an attempt to scare people into compliance. For example, in the early days of Covid, the death toll made headlines, then it subtly shifted to the number of positive tests, and now to the percentage of sick who are unvaccinated.

Wang also expresses frustration with the US government’s refusal to share accurate data with the American public, a sentiment she admittedly shares with ‘deplorable’ Trumpers.

China bullied people into silence and compliance by making emotional and nationalistic pleas, while in the US the argument for people to take vaccines is also emotional – ‘do no harm to grandma’ – and collective: ‘we need to work together for herd immunity’.

The bullying impulse is strong in the pro-vaccine movement too, as restricting liberties and requiring vaccine passports for government aid have remarkably become the default position among elites, many liberals and the media, despite resulting in obvious racial disparities.

‘In the Same Breath’ is a flawed documentary, but if viewers can overcome its limiting bias and see the authoritarian forest for the partisan trees, it’s worth watching for no other reason than to remember the insidious and nefarious nature of power and how easily freedom is suffocated by governments meant to protect it.