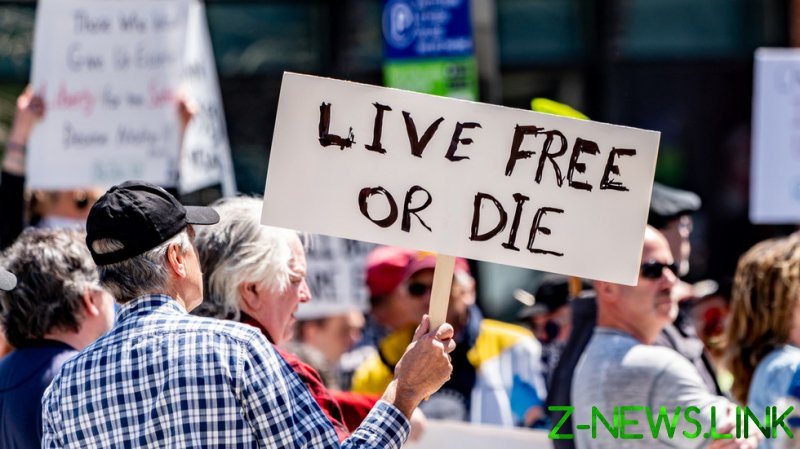 “On Monday evening an armed individual trespassing in my backyard was arrested carrying two dozen rounds of ammunition,” Sununu said on Wednesday afternoon. “Cancelling our outdoor inaugural ceremonies was not a decision we made easily, but it was the right decision to ensure the safety of my family and the public.”

Skylar Bennett, 38, was arrested on Monday and charged with criminal trespass and disorderly conduct at the event advertised as a “candlelight vigil for victims of the lockdown.” It was the latest in a series of protests that began on November 22, two days after Sununu – a Republican governing a state with a reputation for libertarian values – imposed a mask mandate indoors and outdoors in a bid to control the coronavirus spread.

“It’s clear this ordinance in Newfields was specifically to benefit King Sununu,” Bennett told AP, adding that people are protesting because the governor “closed the state.”

Sununu was not at home during the protest. He accused“armed protesters” of becoming “more aggressive” over the past several weeks, “targeting my family, protesting outside my private residence, and trespassing on my property.”

Nine people received summons over the gathering, which police said violated the new anti-picketing ordinance, passed by the Newfields selectboard of which the governor’s brother is a member. Sununu’s spokesman Benjamin Vihstadt said the governor had “no involvement” in the ordinance or in its enforcement.

Instead of the planned outdoor event on January 7, the governor and the executive council will be sworn in during a small private ceremony with virtual attendance by members of the state legislature.

Much of the US has been under various degrees of coronavirus lockdowns since March, when the first “15 days to stop the spread” measures were announced. Republican governors who relaxed the lockdowns faced pressure from the media, while Democrat governors who have maintained the measures faced protests and backlash from the populace.