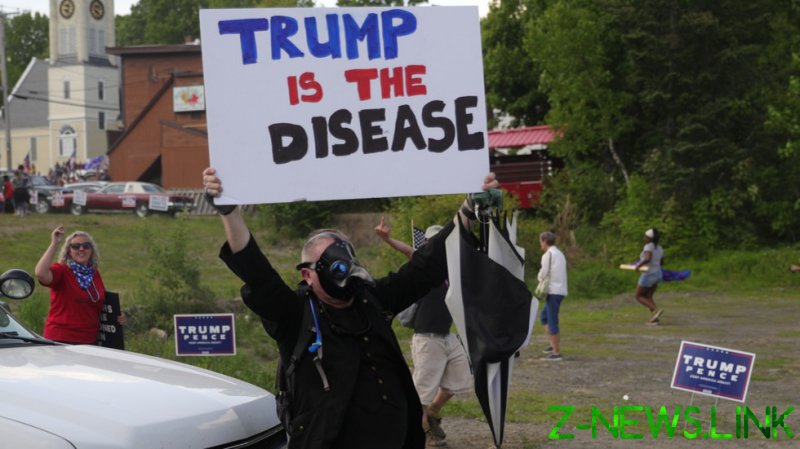 Titled ‘Dying in a Leadership Vacuum,’ the editorial – dated October 8 but made public Wednesday – says the US leadership “failed” the Covid-19 test, turning a crisis into a tragedy. While it does not mention the names “Trump” or “Biden” once, its political implications are crystal clear.

NEJM editors praise China’s draconian lockdowns as “severe but effective.” They also claim the US had “ample warning” about the virus but failed to provide protective equipment and universal testing. Though the government invested heavily in vaccine development, “its rhetoric has politicized the development process and led to growing public distrust.” Instead of trusting experts, “our leaders have largely chosen to ignore and even denigrate” them, they write.

Accusing the federal government of having “largely abandoned” disease control to the states, which don’t have the tools available to Washington, NEJM editors further accuse the president of undermining those tools. The Centers for Disease Control and Prevention (CDC) has been “eviscerated,” the Food and Drug Administration (FDA) “shamefully politicized” and the National Institutes of Health (NIH) – this presumably refers to Dr. Anthony Fauci of the National Institute of Allergy and Infectious Diseases – “excluded from much crucial government decision making.”

The sources cited for these claims are reports from the New York Times and the Washington Post.

Last week, the journal published a study advocating a mandate for vaccinating the population, with harsh penalties for those who refuse to submit. The authors favored “employment suspension or stay-at-home orders,” over fines or criminal charges are discouraged, because they “disadvantage the poor” and risk getting the mandate itself challenged in court.

A NEJM study published in April appeared to cast doubt on the wisdom of mandating face masks, but its authors published a follow-up letter in July insisting that they had in fact intended to support such a mandate.

Thursday’s editorial largely echoes the arguments made by the Democrats against Trump. Biden, the former vice-president who hopes to take the White House next month, has already said he would “listen to science,” put Fauci in charge, and implement nationwide lockdowns and facemask mandates if elected.

Trump himself tested positive for the virus last week and spent the weekend at the Walter Reed National Medical Center. Returning to the White House on Monday, he said the therapy has left him feeling better than 20 years ago.

“Don’t let [Covid-19] dominate you, don’t be afraid of it, you’re going to beat it,” he said in a televised message to Americans. In another video on Wednesday, he vowed to provide the same treatment, for free, to all Americans who need it.