Home / INCREDIBLE / New data on the moons of Mars

New data on the moons of Mars 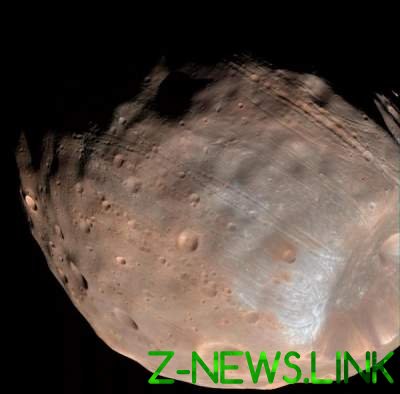 Phobos does not consist of solid soil, as previously assumed, and from dust.

Research Agency NASA has managed to obtain new information about one of the moons of Mars – Phobos thanks to the infrared imagery of the space missions Mars Odyssey, on which the system is installed THEMIS.

Phobos – only one of the satellites of the planet Mars, but scientists consider it as the reference point at the start of the flight people on the “red planet.” During observations of temperature changes on the moon, NASA experts, it was observed that the surface of Phobos is rapidly heated and cooled. When comparing an infrared image of the satellite scientists came to the conclusion that Phobos is not composed of solid soil, as previously assumed, and from dust.

The shape of the Phobos — oval, the diameter of which is 22 kilometers. At the moment, managed to obtain images of only one side, but in high resolution. Using aircraft Mars Odyssey NASA scientists also want to study the process of complete disintegration of the satellite, which is due to rendezvous with the planet. Experts predict that Phobos will disappear after about 20-40 million years.