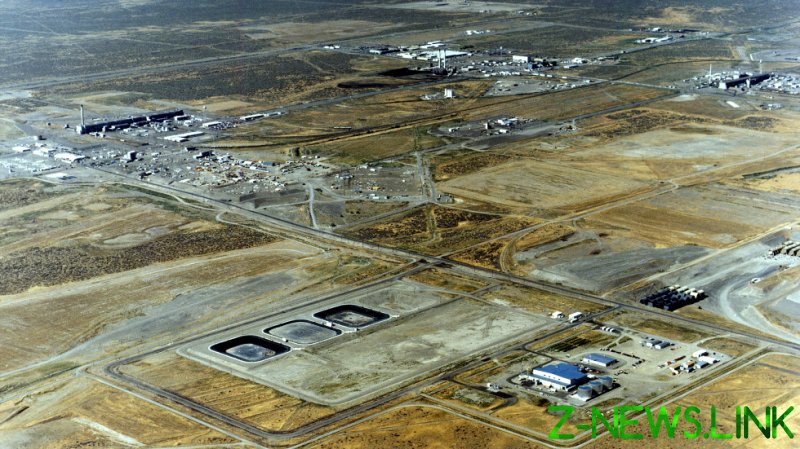 The leaking tank, located at the Hanford site in southeast Washington, just 8 miles west of the Columbia River, was announced on Thursday by the Energy Department. A breach in the 75-year-old storage reservoir was suspected more than a year ago but only confirmed recently, one of several decrepit tanks at the facility.

“It’s a serious matter whenever a Hanford tank leaks its radioactive and dangerous chemical waste,” the state’s ecology director, Laura Watson, said in a statement, adding that that officials do not believe the breach poses “increased risk to workers or the public,” though it does contribute to “the ongoing environmental threat at Hanford.”

While the problematic tank, designated B-109, is only the second officially confirmed leak at Hanford, (the first was detected in 2013), many of the site’s 149 storage tanks are suspected to have issues, with the Washington Ecology Department estimating that more than 200,000 gallons of waste have escaped from the “B Farm” alone, where B-109 is located. Across the whole Hanford facility, they believe 1 million gallons have poured from compromised tanks.

With B-109 leaking an estimated 3.5 gallons each day, or 1,300 gallons per year, the concerns are compounded by the tank’s close proximity to the water table, sitting just over 200 feet above, as well as the Columbia River.

A formal leak assessment was launched last year after the tank’s levels were found to be dropping, and though a breach was discovered, local officials’ hands remain tied under an agreement governing clean-up operations at Hanford. Environmental agencies can only take “immediate action” in response to a leak if it is deemed “necessary to abate an imminent and substantial endangerment to public health or welfare or the environment.” For now, the state, as well as federal agencies, have assessed no immediate danger from B-109, despite the confirmed leak.

“Contamination in this area is not new and mitigation actions have been in place for decades to protect workers, the public and the environment,” Energy Department spokesman Geoff Tyree told the Associated Press, adding “There is no increased health or safety risk to the Hanford workforce or the public.”

Hanford has seen a years-long, multi-billion dollar clean-up effort due to its ailing equipment, which itself has become controversial. In 2019, the federal government sued arms dealer Lockheed Martin, which was awarded a $3.2 billion contract in the clean-up project alongside another private company, alleging it defrauded American taxpayers with illegal kickback payments.

The site’s management has also come under fire in recent years, with workers accused of deliberately dumping toxic waste into the environment in 2017.

The Hanford facility has a rich history stretching back to the days of the Manhattan Project, becoming the site for the world’s first large-scale plutonium production reactor. Plutonium manufactured there was used in the first nuclear bomb test at the Trinity site, as well as in Fat Man, the bomb dropped on Nagasaki, Japan in the waning days of the World War II.

The B-109 tank came online in 1946, running for 30 years before it was shut down, while the entire facility was shuttered in 1987, leaving behind some 53 million gallons of waste. Since then, local authorities have worked to stabilize the remaining storage vessels, but problems keep piling up, as thousands of gallons of hazardous materials continue to flow into the soil unabated.