Home / WORLD / New crisis in Kiev: Ukraine’s inflation spike spells trouble for the embattled nation because of its dependence on foreign cash

New crisis in Kiev: Ukraine’s inflation spike spells trouble for the embattled nation because of its dependence on foreign cash 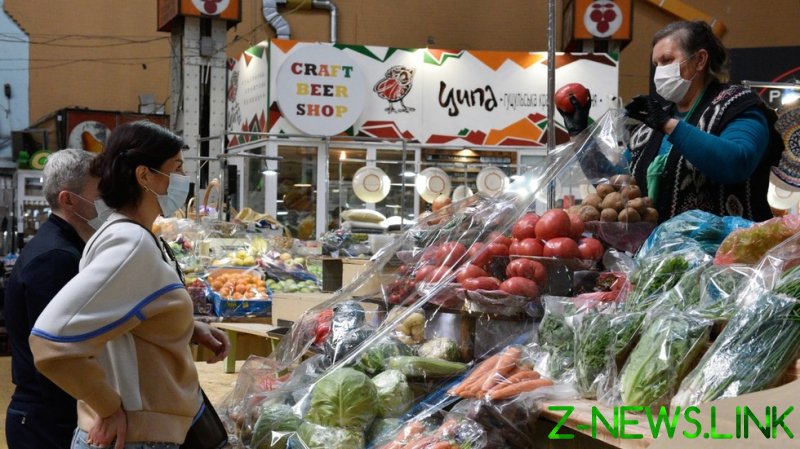 That’s why it is important that last week, Ukraine’s Central Bank (NBU) announced that year-on-year consumer inflation now exceeds 10%, which has not happened since 2018.

In Kiev, this has caused a notable stir in the news cycle. The station Espresso TV, for instance, dedicated a segment of its major evening talk show on 10 August to the development. A representative of the party in power, President Volodymr Zelensky’s “Servant of the People,” predictably blamed international developments, while other participants criticized the government and the NBU, suggesting that the only hope for rescue now lies with seeking help from abroad through the International Monetary Fund (IMF).

There is no doubt that this issue has special political resonance. This is partly due to the country’s post-Soviet experience since 1991. Inflation, sometimes extreme, has a history of hurting its population and impacting its politics. In fact, it was really only after 2015 that it has more or less come under some sort of control. That was the year in which the NBU officially adopted a policy of inflation targeting, making it a priority to keep inflation in check. It has mostly succeeded, at least on its own terms.

This has produced praise from some boosterish Western commentators, such as Anders Åslund of the pro-NATO lobby group The Atlantic Council, who prioritize – or fetishize – what they see as macroeconomic stability, which usually coincides with the interests of Western investors. Inside Ukraine, more careful observers have drawn attention to the cost of inflation-targeting which, of course, exacts a price, including in gross domestic product losses. The question is, as so often in economic policy, one of balance; and the balance is hard to strike.

Apart from these general disagreements, the recent spike in inflation has led to fresh doubts and questions: The NBU claims that the increase is still basically “in line” with its projections and plans and predicts a decrease in inflation already by the end of this year. But its reassurances are clearly not enough for everyone in Ukraine.

To explain why, we need to go beyond recent history and focus on current politics. The key point here is that, in public discourse, inflation is about much more than just inflation. In fact, it’s a peg for broader concerns and disagreements about the economy, policy, and, last but not least, profound questions of social justice. In Ukraine’s case, it also touches on the relationship between Kiev and its supporters and sponsors in the West.

Once we look at that wider frame, one important factor is the fact that the Ukrainian population is not generally doing well. Using  official figures from the State Statistics office, the director of the Ukrainian Academy of Science’s Demography and Social Research Institute has concluded that over half of all Ukrainian households are below a national and realistic defined poverty line – not to be confused with the international poverty line, as set by the World Bank, given its application to Ukraine makes no sense.

Public perceptions are even worse: Again according to data from Ukraine’s State Statistics office, just over two-thirds of Ukrainian households (67.1%) see themselves as “poor”; only 1% consider themselves “middle class.” The rest (31.9%) feel that they fall in a less than comfortable middle, neither “poor,” nor yet “middle class.”

Expectations are not optimistic: fewer than one in ten people are looking forward to material improvements in the next 12 months. And while almost half of all households expect no change, nearly as many fear that things will get worse.

On the whole, Ukrainian wages and salaries have been growing (which, in turn, may have exerted some inflationary pressure). But, at the same time, these gains have been eaten up by rising prices, as some Ukrainian commentators and politicians are pointing out.

At the beginning of this year, Ukraine has already seen widespread protests over price hikes on utilities, in particular energy. Trade Union leaders blamed rushed reforms. Known as “tariff” or “fuel protests,” the movement was significant enough to force at least temporary concessions from the government, at the cost of antagonizing the IMF.

This situation of widespread and increasing poverty and even more widespread pessimism would be a problem for any government. For the current Ukrainian leadership as well, under comedian-turned-president Volodymyr Zelensky, there’s no room for complacency.

Zelensky personally still beats all competitors in the ratings, but his popularity has massively declined compared with his rock-star status when coming to office. The situation is essentially the same for his party “Servant of the People.” Both are still in the lead but far from invulnerable. Hence, they must seek ways to either improve or at least appear to improve the economic situation of most Ukrainians. At the same time, they can try to offer explanations, perhaps even scapegoats. As a very minimum, they cannot be seen as making things worse.

One force majeure explanation that the government can point to in good faith is the economic impact of Covid-19. While precise causality is always a challenge, there is no doubt that, as in other economies, the pandemic has had a substantial and painful effect. The disruption has upended forecasts of growth and has led, according to the NBU, instead to a GDP decline of 4% in 2020 and, by the end of that year, an unemployment rate of 10%

A second explanation blames, in effect, individuals, namely oligarchs exploiting monopolies, at the cost of the general population, as for instance in a recent TV interview with the leader of Ukraine’s Anti-Trust association. This may seem far-fetched or “populist.” Yet, despite all the “revolutions”, Ukraine still features flourishing oligarchs who have monopoly – or at least oligopoly – power in sectors such as electricity, fuel, gas, or such very specific but crucial things as wheels for the state’s railways.

A variant of this “blame-the-oligarch” approach has, incidentally, been offered by Kyrylo Shevchenko, the head of Ukraine’s Central Bank as well: For him, oligarchs have used their influence to resist the NBU’s drive for banking sector privatization and against corruption and bad commercial banks. Shevchenko has his own problems, with important staff demonstratively leaving his institution, rumors that he is losing the backing of President Zelensky making it into the Financial Times, and some skepticism from Western commentators.

One thing is certain – in political terms, Ukraine’s oligarchs remain a headache for president Zelensky and his government, for two main reasons: First, Zelensky promised to break their power and, like every other Ukrainian leader before him, has utterly failed to do so. Second, many Ukrainians do not believe that he himself is independent of them. This has remained true in spite of – or because of – Zelensky’s attempt to shore up his position with a recent legal initiative putatively aiming at “de-oligarchizing.” The effect of this flawed operation, probably meant to serve as a populist rallying cry, seems to have been public disappointment and distrust.

Finally, the government could, of course, blame the central bankers. Especially with the fight against inflation appearing to falter, at least for now, Zelensky and his team may be tempted to signal that the NBU’s tough line has gone too far, damaging the real economy while chasing after figures that please international advisers and investors.

In fact, there are clear signs of this already happening. Ukraine’s First Deputy Prime Minister and Minister of the Economy, Alexei Lyubchenko, has gone public with what must be an ominous announcement from the perspective of the NBU. The government, he wants the nation to know, is initiating a “discussion on closer coordination of policies” and “the role and place of” the Central Bank and the government. More than hinting that the NBU’s anti-inflation policy has been “excessive,” his key message was implicit but clear nonetheless: money has been too tight, and a looser approach would be better.

Is this a trial balloon? Such words may or may not have consequences. As a minimum, they can escalate the blame game, and it is clear where some fingers are already pointing.

Yet all options have one thing in common. They remain restrained by Ukraine’s dependence on international funds, especially from the IMF. The good news for Ukraine’s government is that the relationship with the international lender continues and fresh money is likely to be made available, to one extent or the other. The bad news is that this has not been a smooth process. The IMF has not shied away from partially freezing the release of funds from Ukraine’s general $5 billion  program, arguing that the country’s reform efforts and campaigns against corruption are too slow.

Yet at the same time, while recently slightly upgrading its assessment for Ukraine, the international rating agency Fitch has also underlined that the IMF’s support remains crucial for the country. One reason for this is, of course, that the relationship with the global lender has a major effect for global investors.

Yet, in a reality that often seems to escape Western think-tankers, lobby group apparatchiks and investment managers, IMF conditions and the demands of Western investors in general do not match well with what the government may need to do to help the majority of the population weather the usual fallout of market reform. Nor, in reality, do they help protect politicians from unpopularity if they fail to do so.