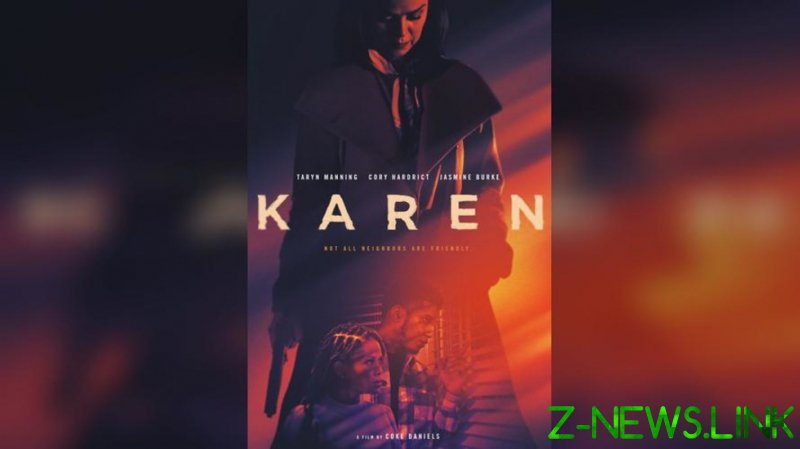 When people inquire about what I do for a living and I tell them I’m a film critic, they often ask, “What’s that like?” My pat answer is, “It’s better than digging ditches.”

Having suffered through the atrociously awful new BET original movie ‘Karen’, I realize that statement isn’t true, as I would’ve been better off spending that hour and a half digging a ditch in which to bury myself alive.

‘Karen’ tells the story of Malik and Imani, a young black couple who move into a mostly white suburb of Atlanta. The titular character is their white racist neighbor Karen Drexler, who’s like the creature from the white lagoon, as menacing music accompanies her every appearance on screen.

The word ‘Karen’ has become a slur against busybody white women, so not surprisingly, every white woman in ‘Karen’ is racist, either overtly or covertly. But Karen Drexler is really racist. If racism was sport, Karen would be Muhammad Ali, Wayne Gretzky, Michael Jordan and Babe Ruth combined.

The movie opens with a shot from above of “Black Lives Matter” written in chalk on a street, and then Karen comes and dumps water on it and starts frantically scrubbing it out. Subtle.

If that didn’t clue you in that Karen REALLY hates black people, the pictures of Confederate soldiers on her bathroom walls, as well as her Confederate flag soap dispenser – I kid you not – should do the trick.

Karen is a widow and stay-at-home mom to two children – a teenage boy and a third-grade girl. Somehow, neither of her children is racist; in fact, her third-grade daughter is so not-racist she has a black boyfriend named Kobe. And, no, I’m not making any of this up.

Karen is also the president of the Homeowners Association (HOA) for the Harvey Hill Homes, named after a Confederate politician, and she wields her presidential power like a true tyrant. The only resistance is from Jan, an Asian board member, who dutifully points out all of the racist assumptions of the HOA, including correcting white people that they should use the term ‘African American’ instead of ‘black’. Good to know.

Now if you think Karen is bad, wait ’til you get a load of her brother, Mike Wind (yes, there’s actually a character named Mike Wind). He’s an Atlanta cop who belongs to a racist secret society, ‘The Brotherhood’, that reaches throughout law enforcement, from cops to district attorneys to judges.

As for Malik and Imani, they’re the most laughable cardboard cutout characters imaginable, with Malik working at a community center and Imani a ‘successful blogger’. Eye roll.

The couple say things to each other like, “You are a strong, beautiful and woke black man, and that’s why I married you,” and, “You’re a college-educated, socially aware, beautiful black woman,” and they finish every sentence with the word “baby.” Cringe.

Speaking of cringe, Malik and Imani are having fertility issues, which may be linked to Imani’s reluctance to “bring a baby into this messed up racist world” with its “pandemics, police killing us and racism.” I was surprised to see that MSNBC didn’t get a screenwriting credit.

Eventually Karen is caught on video doing ‘Karen’ things and it goes viral, so she turns her racism up to eleven. Her brother Mike unleashes his racism, too, and conspiracies and more bad cinema ensue.

Trying to point out the outrageous sins of this asinine movie is like handing out speeding tickets at the Indy 500, but the turn the film takes in its final scenes is particularly egregious to the point of being insulting.

After all the flaccid drama, the movie ends with Ben Crump, the real-life lawyer for the family of George Floyd, giving a press conference with Malik and Imani standing next to him, while accompanied by a trumpet player on the stage performing ‘America the Beautiful’. I kid you not.

As Crump’s shameless and very poorly delivered speech rambles on, the film cuts to the sign for the Harvey Hill Homes being changed to John Lewis Homes, thanks to new HOA president Imani. Then, as Crump impotently utters the meant-to-be-profound final line, “All lives can’t matter, until black lives matter too!” we see Malik and a pregnant Imani standing at the door to their house staring deeply into the camera. Yikes.

Look, this movie is, at its very best, a ludicrous ‘Saturday Night Live’ skit gone woefully awry. The script is garbage, the dialogue consistently laughable, the acting atrocious, and the directing so dreadful as to be criminal.

Obviously, I loathed this steaming sack of crap. But this movie isn’t just bad; it’s toxic, because it’s marinated in the same mindless identity-based hate it allegedly claims to despise. And yet because that hate is directed at white women, it’s deemed culturally acceptable.

If you’re one of those delusional, virtue-signaling woke white women who has bought into the Black Lives Matter moral panic and believes America is in the grip of an epidemic of racism, you may consider yourself one of the ‘good ones’. But ‘Karen’ disagrees, as it paints all white women as nefarious Karens at heart.

Just like the pernicious press, patronizing politicians, and pandering corporations that stoke the fires of racial resentment and use emotionally manipulative misinformation to dupe sentimental simpletons, ‘Karen’ is a relentlessly shallow, viciously vapid, and rabidly racist movie that makes a mockery of a serious subject matter in an attempt to make money and spread anti-white animus.

If only someone would complain or call the cops on this movie and get this atrocity cancelled. Where’s a Karen when you really need one?