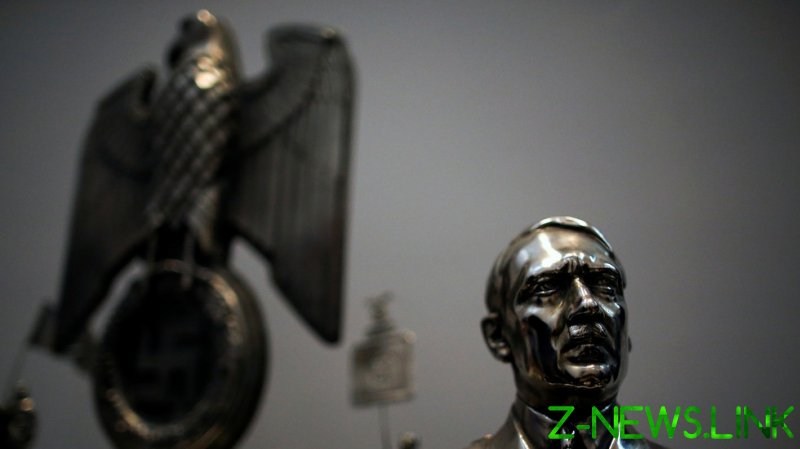 On Holocaust Remembrance Day, Forward writer Lev Golinkin unveiled a list of scores of monuments and streets across the US and Europe honoring “fascists, Nazis and murderers of Jews” as indicative of a darker current running through supposedly tolerant societies. That most were erected in the last 20 years is indeed shocking. But removing or renaming them risks amputating our past at a time when we need to be learning from it more than ever. What happened to ‘Never forget’?

The frenzy to tear down monuments to prominent southern Civil War figures was a point of bitter controversy over the summer. Demands to take down memorials to Confederate leaders soon grew to include former presidents traditionally looked upon as American heroes, from Theodore Roosevelt to Thomas Jefferson. Even the Washington Monument wasn’t spared calls for renaming, and many Americans – especially in the south – felt their history was under attack.

Like BLM’s targets, the names on The Forward’s list are presented as universally evil, unfit to be seen by polite society – even though the reality is far from black and white. Dragoljub ‘Draza’ Mihailovic, leader of the Yugoslavian Chetnik militia, is described as a Nazi collaborator by The Forward, but no less than Encyclopedia Britannica names him and his militia as resistance fighters against the Nazis, noting he was cleared of the collaboration charge by a US commission of inquiry.

Under his command, the Chetniks rescued 400 Americans who’d been shot down over enemy territory, and he was awarded the Legion of Merit after his death. This is why monuments of him stand in six American cities. Similarly, World War I hero turned Vichy France Nazi puppet Philippe Petain has streets named after him all over the US for his heroics in the first war, not his betrayal in the second.

Unfortunately, not every figure highlighted by the outlet is misclassified. Notorious Ukrainian Nazi collaborators Stepan Bandera and Roman Shukhevych were memorialized in Ellenville, New York in 1962 by veterans who had served under Shukhevych during World War II and clearly did not feel they had done anything wrong in slaughtering tens of thousands of Poles and Jews. Less explicable – and a lot more ominous – is the youth summer camp in Baraboo, Wisconsin, where busts of both men were erected in 2012 and 2013. The following year, the US helped sponsor a coup, backed by neo-fascists, to overthrow the democratically elected government of Ukraine.

That young children are being trained, both in the US and in Ukraine, to revere these fascists is disturbing, to say the least. Even more so is Washington’s support for such indoctrination. But the US is home to a large and fervently nationalist Ukrainian community who are unlikely to suffer the removal of their heroes lightly – one could expect the same backlash that took place in Charlottesville, Virginia, when its statue of Confederate leader Robert E. Lee was threatened. Any decision to remove or, better, contextualize the statues must be taken with the full support of the community, unless one wants to actually feed fascist sentiment by creating an (inanimate) martyr.

Golinkin actually seems to resent that BLM toppled statues of slave owners and Confederate generals without stopping to think of the Nazi collaborators who’d been similarly memorialized, calling it “the most curious thing about last year’s protests.” And like articles published in support of Black Lives Matter over the summer, the list – which included a handy map showing a relatively sparse sprinkling of these sites in the US, but many in Eastern Europe – strongly hints the offending structures be destroyed, noting they “disparage the dead” and “warn the living.” He confuses cause and effect, suggesting nascent fascist movements in Eastern Europe or the US are taking their cues from decades-old statues, as if their mere existence constituted a wink and a nod to go get ‘em, tiger! What the world needs to put an end to all this is more Holocaust education, the writer declares.

The very word “Hitler” has become synonymous with “politician I don’t like” for political commentators on the left and right alike. Historical ignorance is endemic in the US – if anything, Americans probably know more about the Holocaust than they do about their own history, including the concentration camps on US soil that held Japanese – not Jewish – prisoners.

This dumbed-down exposure doesn’t translate to understanding, of course. Being on the receiving end of Hollywood’s endless WWII dramas and the History Channel’s cartoonish “nightly Nazi shows” gives the distorted impression that fascist regimes somehow spring fully formed from the forehead of a Hitler or a Mussolini, who somehow hypnotized entire populations into committing unspeakable atrocities. But these leaders could never have taken power without legions of devoted followers, and that process is often excised from official reenactments.

Read Hannah Arendt or George Orwell or any of the other excellent writers who’ve delved into the psychology of fascism, however, and the chain of events becomes clearer. History is a complicated knot of causes and effects, not a jumble of disparate facts to be accessed when needed, from which troublesome figures can be excised and fed to the memory hole. The Germans had been emasculated and reduced to dire poverty when Hitler showed up (buoyed by bushels of American and British money) and promised to ‘build back better,’ blaming Jews for the nation’s problems and feeding on the popular rage that resulted.

The unfortunate truth is that the vast majority of people do not join up with fascist parties because they’re born evil, and even radicalizing propaganda rarely convinces someone on its own. Political frustration, economic privation, and personal struggles often play a much larger part. Given that the Department of Homeland Security just issued a domestic terrorism warning for the next three months based on the political frustration of former president Donald Trump’s supporters, coupled with the economic carnage wrought by government responses to the Covid-19 pandemic, one would be naive not to expect a wave of fascist sentiment. And given the bloodthirsty calls from the “other side” to hound the ex-president’s supporters out of employment and pry them off the internet – while dehumanizing them as rats and bringing in thousands of National Guardsmen to occupy the streets of Washington, DC – one would be even more naive to think that sentiment would come from just the right.

A fascist takeover has nowhere to grow in a nation that treats its citizens fairly, without elevating one group above another; that offers quality education and economic opportunity; that encourages people to participate in society rather than fear it. But the US and Europe have never been so unlike that description. At a time when German politicians are suggesting sending Covid-19 dissenters to internment camps, Europeans are surely realizing they’ve seen this movie before. So have Americans – we’ve just chosen to forget it.