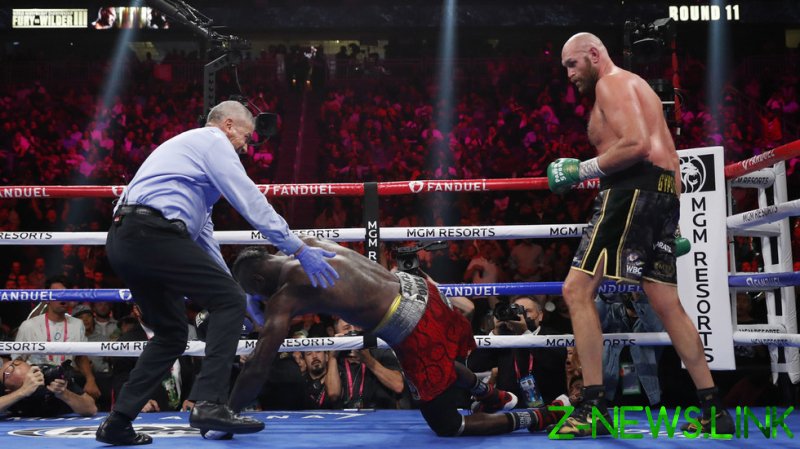 In a back-and-forth contest to cap one of the most intriguing rivalries in modern heavyweight history, Fury put his rival down in round three but was sent to the canvas himself twice in round four as the fight ebbed and flowed in front an enthralled crowd of more than 15,000 fans at the T-Mobile Arena.

Described by Fury as ‘an atomic bomb’ before the bout, Wilder showcased his threat and particularly early on it seemed the American could well snatch back the belt he had lost to Fury in their last meeting in February of 2020.

But without showing the glittering brilliance he did during that last fight, Fury still boxed smart for most of the night, absorbing the damage from his heavy-hitting rival and grinding down Wilder before turning the tide irreversibly in the latter rounds.

Fury again dropped Wilder to the canvas in round 10, and the inevitable arrived in the following round when The Gypsy King unleashed a crunching right hand to knock out his opponent.

Meeting for the third – and most likely final – time, Fury and Wilder have shared one of heavyweight boxing’s great rivalries of recent years, dating back to the contentious draw when they first stepped between the ropes in December of 2018 and with a middle installment in 2020 seeing Fury comprehensively outbox the American.

This time the Brit again prevailed and his class ultimately shone through, but he was tested along the way.

After a fractious build-up throughout fight week in which both sides traded increasingly personal insults, the anticipation was cranked up even further before the opening bell with a delay caused by an apparent issue with Wilder’s gloves – or possibly just mind games from the American.

The Bronze Bomber did eventually make his way to the ring dressed in a considerably less extravagant outfit than last time but still with a red jewel-encrusted mask.

Fury’s entrance saw him arrive accompanied by a group of Spartan warriors and dressed in Roman-style garb to the tune of AC/DC’s ‘You Shook Me All Night Long’. 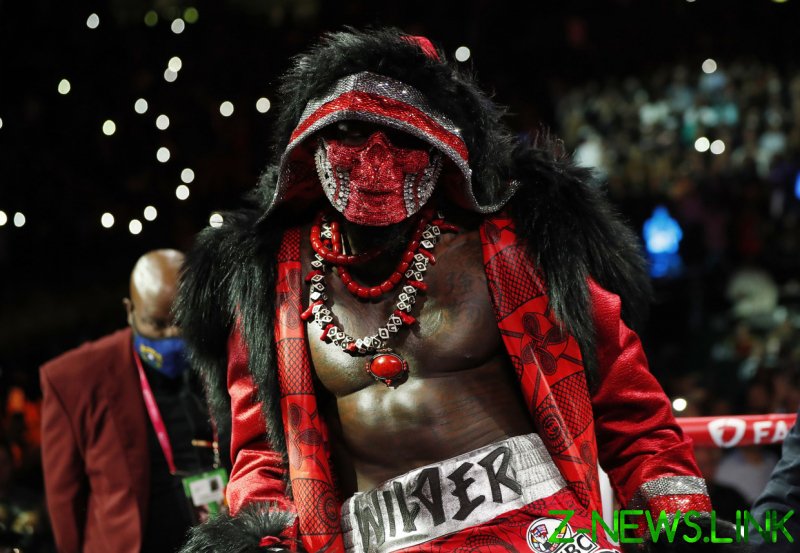 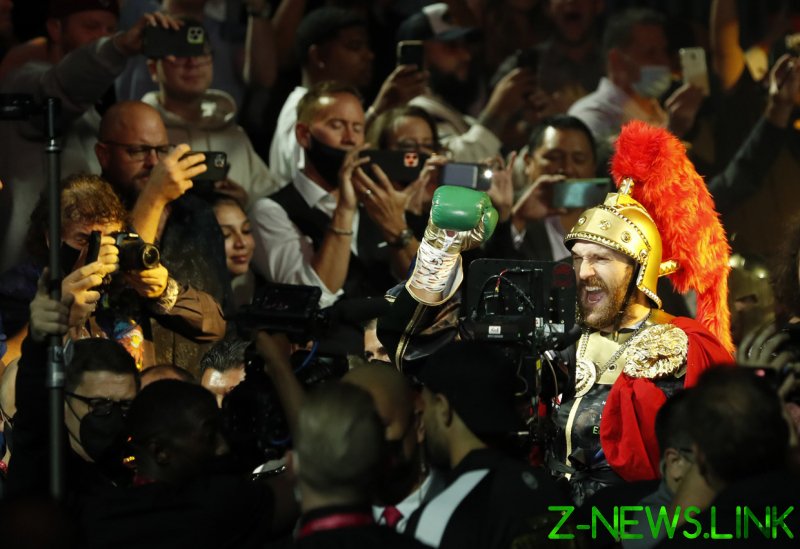 As the pair met in the ring Fury stared wild-eyed at Wilder, but on the opening bell it was the American who started the busier of the pair, making heavy use of his left jab mainly to the body and forcing Fury on the back foot.

The Brit landed a heavy right hand at the end of the stanza, although the challenger seemed to shade the opening round with his more active output.

Wilder continued swinging as the main aggressor in round two as Fury waited more patiently, content to let the American do most of the work.

Fury received a ticking off from the referee for repeatedly wrapping Wilder up in a headlock, and that was the cue for the former champion to launch a renewed barrage.

The bout seemed to be shaping up very differently from the last time round, but just when it seemed he was under pressure, Fury found a home for a thumping three-punch combination to drop his rival in round three.

Wilder rose to his feet to survive the count as the bout sparked into life.

Round four saw the momentum shift again, this time in the American’s favor as Fury walked straight into a right hand from Wilder, felling him.

Fury survived but was re-introduced to the canvas when he was caught with another salvo soon after.

Again the 6ft 9in Brit clamored to his feet as the bell rang out the round. 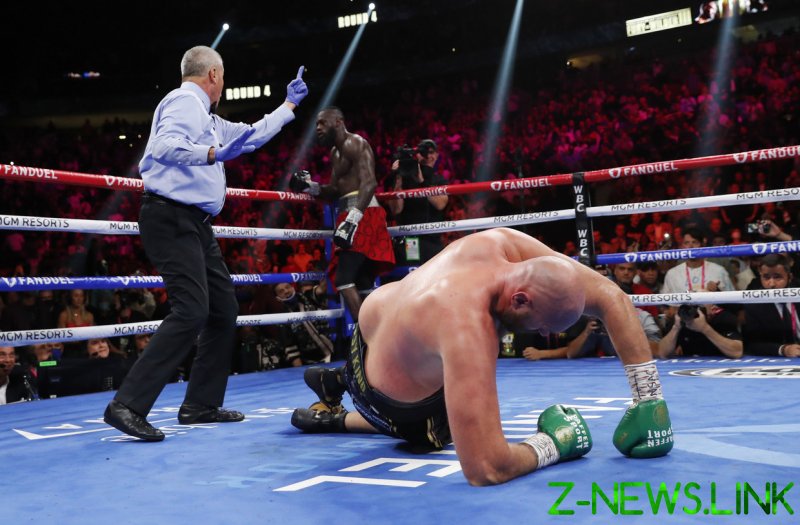 Fury found himself in trouble in round four. © Reuters

Round five was a relative lull in the storm as both men seemed labored, although Fury caught Wilder with a big right hand to remind him he was still there.

Into the following round, and the pair swung with heavy hands as Fury pressed and Wilder mostly kept his concussive right hand cocked, but the Alabama fighter did unload it on one occasion to stop the Brit in his tracks.

The bout appeared in the balance in round seven, but it proved to be a turning point as Fury stepped up the pace, catching Wilder with a barrage of shots as the American clung on.

The bell saved Wilder from more damage and he lingered on his stool before coming out for the eighth, still looking dazed.

Wilder shipped more heavy shots and was rocked with a straight right hand approaching the final minute of the round as Fury turned the screw. 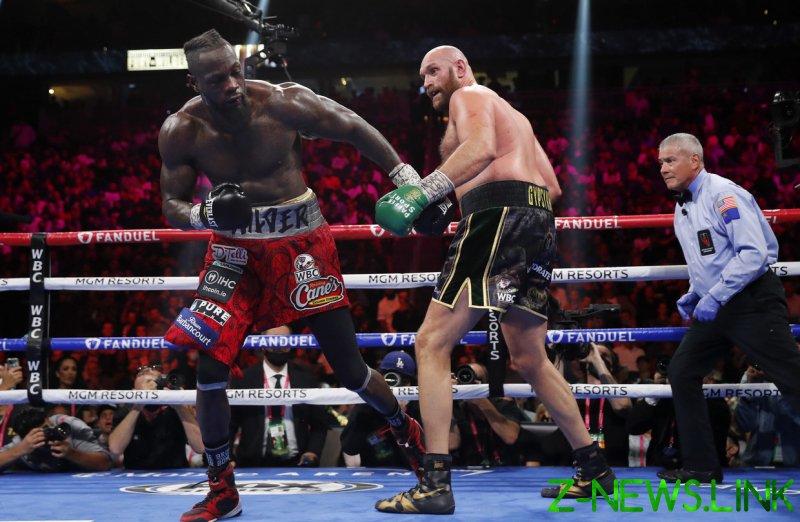 Fury exerted himself as the fight wore on. © Reuters

Yet still Wilder hung on, knowing that as long as he stayed on his feet he had a potential get-of-out-jail card with his explosive right hand.

Wilder took a doctor’s check before round nine but was cleared to continue.

Soon into the stanza Fury was pressing but Wilder issued a reminder of his threat with a big shot from his right hand. Mainly though the American was swinging and missing as Fury walked down his rival, hunting the finish.

Fury’s onslaught continued in the tenth, Wilder remaining on his feet but tottering in peril. A finish from Fury seemed inevitable, and he floored Wilder for a second time in the bout with a right hand to the temple. 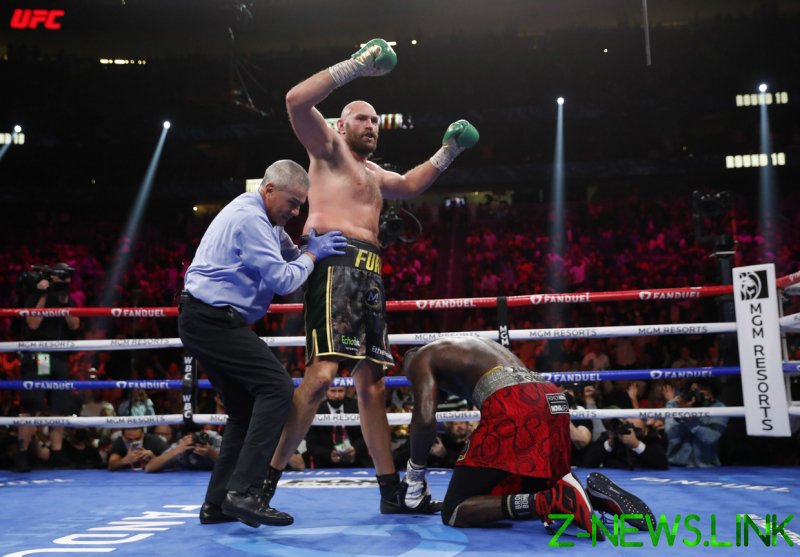 Fury had Wilder down in round 10 before finishing the job in round 11. © Reuters

Wilder rose and incredibly ended the round still swinging, but Fury was firmly in control.

A right uppercut from the Brit early in round 11 set the tone and soon Wilder was holding on for dear life.

Fury finished proceedings against the ropes with a savage right hand, putting the American out of his misery and settling their epic trilogy in conclusive fashion. 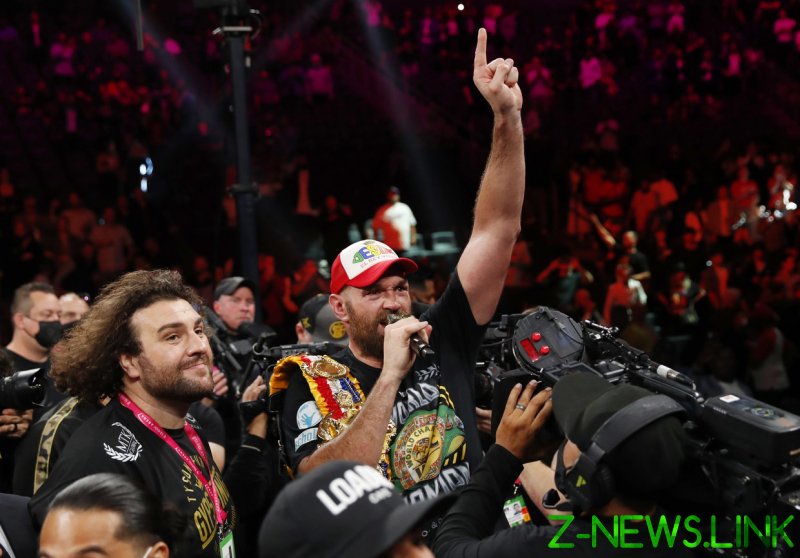 Fury visited the beaten Wilder in his corner at the end of the fight, seemingly offering an olive branch after an often toxic build-up to the fight.

The Brit is still undefeated in his 32 fights, the 2018 draw with Wilder the only blemish on the record of the lineal world heavyweight champion.

“I have proved time and again that I can never be written off,” the 33-year-old Fury told the Las Vegas crowd.

“I didn’t have my best performance but I pulled it out of the bag when it needed to be done.

“He did keep getting up but it was that final right hand to the side of the head that finished him.”

Speaking on his two visits to the canvas, Fury added:“I wasn’t hurt. You get hit, you wake up on the floor.

“I got up and was very conscious the whole time. I was one punch away from knocking him out in the whole fight…

“He’s got no love for me, Deontay Wilder. But I’m sportsman. I went over to show some love and respect and he said he didn’t want to give it back.

“That’s his problem, I pray for him.”