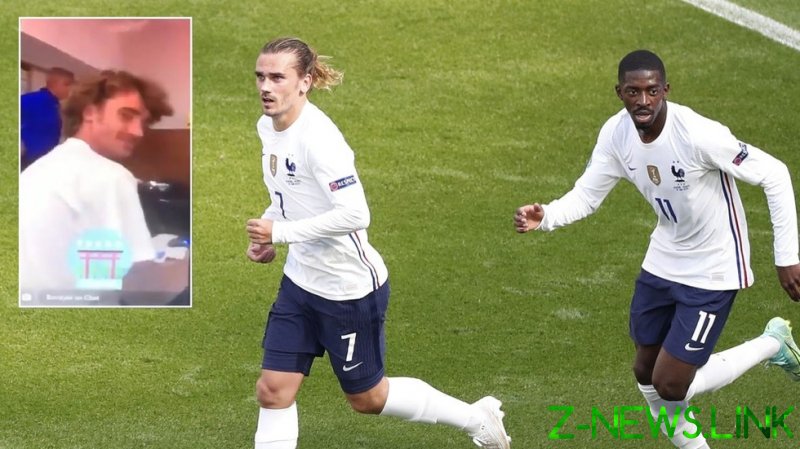 The clip resurfaced at the weekend, and came as part of a Snapchat from winger Dembele.

As hotel staff attempt to hook up a video game console to the television for them, Dembele asks Griezmann: “All these ugly faces, just so you can play PES [Pro Evolution Soccer], aren’t you ashamed?”

“What kind of backward language is that?” he says in French, of Japanese being spoken by the men.

“Are you technologically advanced in your country or not?”

As members of the Catalan press labored to identify when the footage was captured, and made calls for Dembele to be sold by Barca immediately, the expensive 24-year-old flop has come out to apologize for his actions.

“Hello all, during these last few days, a private video dating back to 2019 has been circulating on social media,” he wrote, as part of a lengthy post on Instagram.

“It all took place in Japan,” Dembele confirmed.

“It could’ve taken place anywhere on the planet and I would’ve used the same expression.

“I was therefore not targeting any community. I just happened to use this type of expression with my friends regardless of their origins.

“This video has since been made public. I appreciate therefore that it could’ve hurt the people present in these images. Because of this, I would like to sincerely apologize to them,” Dembele finished.

Next up was Griezmann, who on Twitter insisted: “I have always been completely against all forms of discrimination.

“For the past few days, certain people have wanted to paint me as someone that I am not,” he said, as the internet masses were quick to remind him of his ‘blackface’ incident at Atletico Madrid.

“I firmly refute the accusations made against me and I’m sorry if I have offended any of my Japanese friends,” he concluded.

Thus far neither of the Spanish or French FAs or Barca have spoken out on the incident or threatened punishment.

But the players’ apologies were just as blasted as the incident itself, while they were also warned “Never come to Japan again”.

“This is not an apology” someone remarked of Dembele’s effort, while another called it a “pretty pathetic attempt” at one.

“Dembele’s apology was basically: ‘I’m an a**hole anywhere in the world, not just in Japan’,” it was also commented.

Along similar lines, it was added by a separate party that Dembele pretty much said: “Sorry you all had to see that, but trust [me], I would be racist to all Asians no matter where they [are] from!”

“‘We all say racist things with friends’. That’s not an excuse. Just because you do it, it doesn’t mean you ‘should’.

“I don’t what’s worse, that video or this sorry excuse of apology which is more of a trigger warning for future.”

Enjoying a rotten summer, Dembele will be out injured until late October with another hamstring knock picked up at Euro 2020.

And at the tournament overall, the pair suffered joint misery when in-fighting and a clash of egos resulted in a shock last 16 loss for France against Switzerland on penalties last week.