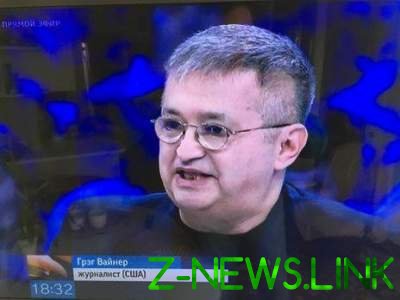 The country has a deficit with real Americans.

Russian journalist and blogger Pavel Pryanikov ridiculed in the network transmission on the propaganda channel “Zvezda”, where the so-called patriots once again devoured a victim of a shady journalist from the United States Greg Weiner.

The plot of the transfer is a little different from the typical Russian: conflict between USA and Russia, which “will bomb each other with nuclear bombs”.

“Rich TV channels invited as a masochistic slave on the side “journalist” Michael Bohm (as we know, he gets about 1 million rubles per month). But the poorer channels, such as “Stars”, have quite the crowd to look for these characters. And here they have there American plays “journalist Greg Weiner,” wrote the Gingerbread.

He told how the participants of the show on a typical scenario drive the opponent into a corner, shouting at him and using rude language.

“And here expert Igor Korotchenko or any other patriot screaming in the face of this old poor Jew in glasses with thick lenses, “Shut up, you bastard!”. If it was the terrible TV they would have it immediately scored in a cage “fighting without rules”, – the blogger added.

See also:  "The kids bellies disinfected?": in the network are laughing at Putin's visit to Artek

This so-called journalist from the US, only breathing heavily and hesitantly and quietly meet the interlocutors.

In the comments, the user of the social network said that “American journalist” really even a different last name.

Other users responded with restraint, but with humor.