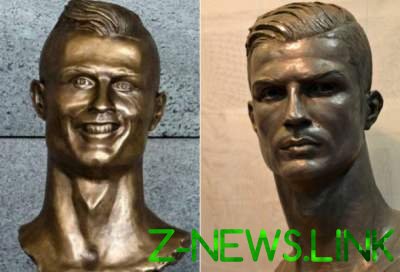 This time summed up the neck.

The author of the sculpture became the 52-year-old Jose Antonio Navarro Arteaga. He says that the creation of the bust inspired by his son. The guy saw a bust of the player at the International airport of Cristiano Ronaldo in Madeira and persuaded his father that he can do better.

A new bronze bust of the player 90 cm tall, weighs 60 kg and worth about 50 thousand euros.

Creation Artegy more like Cristiano, but has certain disadvantages.

Some pointed out that the resemblance is really there and regretted that the bust will not be the hero of so many Internet jokes as its predecessor.

The first bust people call “original”, portend a bright future for him and say that there will be no substitutions.

“No! He made a new bust! What a shame! Of course, I prefer the one on the right. And that Ronaldo to do with it. What do you think?”

“You and “that guy”, she said not to worry. (Most likely, meaning Irina Shayk, former girlfriend of the football player that got into the lenses of photographers in new York in the arms of the unknown guys in 2014)”

“This is even worse because of his neck”

!This is it before and after he became rich!

“Bust to the left (from airport) should be a prize for each sport, every sports event and every game. The best sculpture of all that ever was made”

“The original is a classic! No change is unacceptable!”

“Why does the one on the right is the giraffe’s neck?”

“Old bust compared with the sculpture “Mind, strength and soul” – Putin is a bear with wings. New bust such can not boast.”