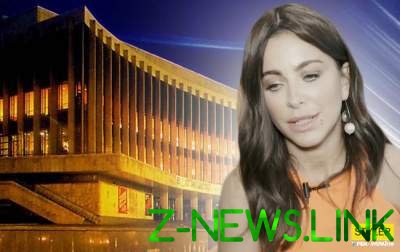 Had gone to Russia Ukrainian singer appeared at the anniversary concert ballet Freedom, which took place in the “Palace Ukraine” on November 14.

Odious singer Ani Lorak, who lives and tours in Russia, arrived in Kiev to sing the song “still love You” at a concert in the Palace “Ukraine”. November 14 on stage with this singer was also made by Vera Brezhneva, Natalya Mogilevskaya, Iryna Bilyk and many others.

Note that Carolina, which did not give concerts in Ukraine in 2014, took the stage in a black jumpsuit with an asymmetrical neckline, and the hair gathered into a high ponytail. The audience shouted at the singer, “good” and not long released from the scene. She Lorak said that she is very nice in Kiev, and in the end, as they say eyewitnesses, even shed a tear.

By the way, the reaction of users to the concert Lorak, which in Russia is called “his”, not long to wait. “On the front need to not take out of the night clubs, and concerts Ani Lorak and others. And, just on the other side of the front,” said the muzhdabaev.

“Ani Lorak performed in the Palace “Ukraine”, talking, crying, and the audience gave a standing ovation. I just can’t believe it. They are cattle! Democracy is not for them. There is no corresponding law? And conscience? And the remnants of common decency? Knew it would be, but not thought so fast that shit gonna come out again, calling itself chocolate. We tolerate? Wait some more and again here in flocks Kasmanautau. Because we have a truce…” – wrote a famous musician Yuri Zhuravel.

Some users still believe that lorac is still loved in Ukraine, and it is “great” that he found the time and desire to please his fans in our country.

“Looking forward to the weekly Grand srach: Ani Lorak secretly returned to Ukraine to perform at the anniversary of a famous dance group. In the poster, her name was not stated. The TV version was filmed by the channel “inter”. Information events abound, you can start to bomb the strip. Forward jackals. By the way, Paul hall stood up and applauded! The fact is,” wrote Monette Khachaturian.

“Hairdryer Ani Lorak: when, like “enemy of the people”, and the people bored and meets a standing concert. This is the real love and popularity of the artist, and not stranded in YouTube watching videos and sitting in the jury. Let Lorak to do a full concert, let’s see how many people will come,” – said Viktor Demchuk.

“Ani Lorak performed in the Palace “Ukraine”. After the speech hall few minutes standing ovation. I hope the tickets were sold anonymously, and SBU, and also the site “Peacemaker” will find out how 10 thousand separ hit the heart of our country for a concert,” sarcastically wrote to Alexey Durnev.

“Got in a big Ukrainian scene, for the first time in three years, and raised the hall. The answers to all the questions was yesterday in applause. Welcome back, lorac! Head back common sense, I hope,” wrote Max Nazarov.

Other users believe that not only lorac must answer for their acts. “Let’s talk about justice. Assumed that Ani Lorak is not a good person. And Loboda with them are not good people. Well, somehow it happened. It and is clear: the war, and they themselves sing in the Russian Federation, prize somehow get mouth speech speak. And it seems they are just not good people, do not argue. But. But at the same time, on tour in Russia goes a lot of other artists. Potap, Barsky, “Time and Glass”, “Mushrooms”, etc. And they especially had not said no good people. Quietly give concerts in Ukraine, leading a TV show and all of them well. And I wonder how they differ from lorac/Loboda/Povaliy? And where is the justice?” – wrote the journalist Sergey Grishin.

She Lorak wrote in his Instagram that: “a Memorable evening in his native Kiev. Thank you for your love. How I missed you.”