Home / WORLD / Netherlands ban air travel from Britain till NEXT YEAR over new Covid-19 strain, similar to fast-spreading variant in the UK

Netherlands ban air travel from Britain till NEXT YEAR over new Covid-19 strain, similar to fast-spreading variant in the UK 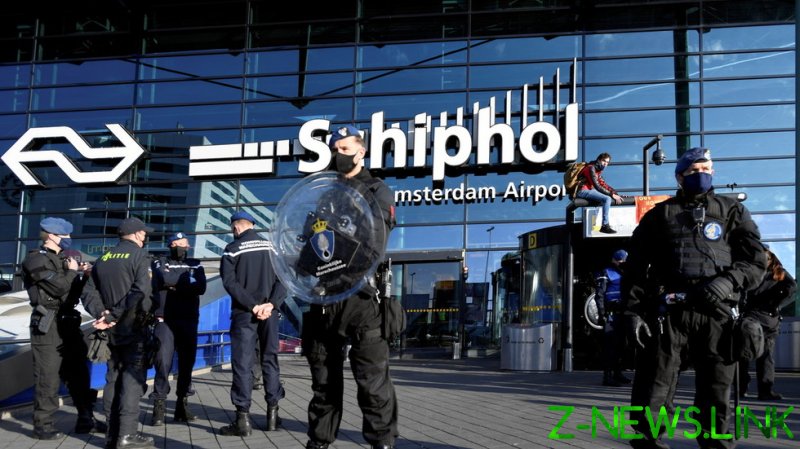 The travel restrictions will apply to all passenger flights from the UK bound to the Netherlands starting 6:00 am Sunday local time, the government said in a statement, issued several hours before the ban was to come into force.

The government described the sweeping ban on air travel for the whole Christmas period as a “precautionary measure”, needed to “limit” potential further exposure of the population to the new strain of the virus, which was first detected in the UK and is allegedly highly contagious.

Citing data by a local health agency, which recommended the ban, the Dutch government revealed that the strain, believed to be the same one that prompted UK PM Boris Johnson’s latest lockdown, was detected in the Netherlands “at the beginning of December” as a part of a case study.

In light of the situation in the UK, the government said it would “further investigate” the case to determine “how the infection came about” on Dutch soil, and whether there are more cases, triggered by the mutant strain.

While suspending only the passenger flights for the time being, Amsterdam did not rule out that the ban will be extended to cover other means of transportation as well.

“The cabinet is closely monitoring the developments related to the Covid-19 virus abroad and is investigating the possibilities for additional measures for other means of transport.”

The Dutch government has also hinted that more restrictions on UK travellers can be imposed at the EU level to stem the spread of the desease, stating that it “will look into the possibilities of further restricting import of the virus from the UK” with other members of the block “in the coming days.”

The move comes shortly after Johnson effectively cancelled Christmas for those living in London, the Southeast and the city of Peterborough, placing the areas under the so-called Tier 4 restrictions. The residents affected by the plan have been barred  from “mixing with anyone outside their own household at Christmas”, with Johnson saying that the much-feared new strain is to blame for the no-go rule.

There’s currently no evidence that it’s more lethal or more vaccine-resistant than the earlier version of the virus, however.

The measures aimed at discouraging travel have had the opposite effect so far. Footage showed London’s train stations being flooded with passengers, hoping to get into the last car to escape the Tier 4 zone until Sunday’s midnight deadline strikes.