Home / WORLD / Netflix’s Q-Force is a ham-fisted attempt to make the security state seem queer-friendly. Welcome to the LGBTQCIA

Netflix’s Q-Force is a ham-fisted attempt to make the security state seem queer-friendly. Welcome to the LGBTQCIA 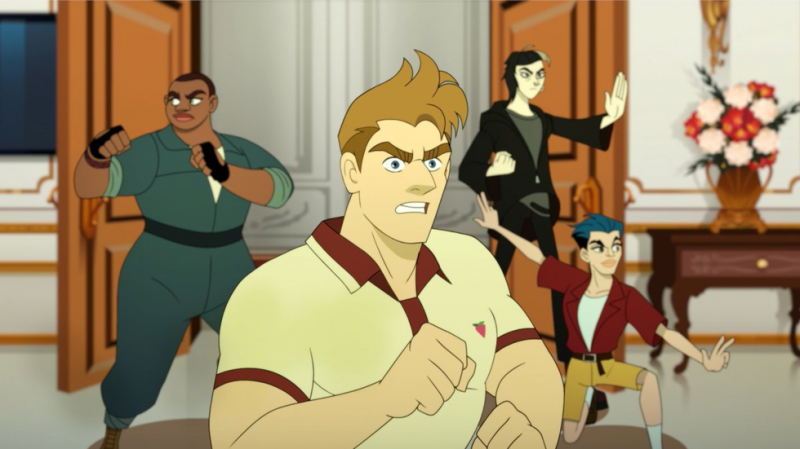 Q-Force centres around a gay James Bond type called Steve Maryweather – known to his homophobic boss as ‘Mary’. He works for a thinly veiled version of the CIA called the American Intelligence Agency, but he and his team are sidelined to a dingy garage office in West Hollywood due to institutional prejudices.

Responses to the show have been mixed, with PinkNews predictably labelling Q-Force “the funny, animated queer spy series we didn’t know we needed.” Reactions from viewers have been mostly negative, with the current audience score on Rotten Tomatoes running at a fairly miserable 38% fresh. The Guardian, usually a bastion of progressive virtue signalling, gave Q-Force a big thumbs down, summarizing: “A glut of queer culture clichés, outdated references to Ally McBeal and Brokeback Mountain and – crucially – an absence of laughs, make for a stereotypical stinker of an animation.”

Certainly, the show’s creators were clearly going for The Simpsons meets Mission: Impossible via Priscilla, Queen of the Desert. What they ended up with, however, was more like American Dad meets Spy Kids 3D by way of Will & Grace.

Maryweather and his merry band of multisexuals are all flaming stereotypes, from the sexually ambivalent Girl with the Dragon Tattoo hacker type, to the big butch black lesbian mechanic and the drag queen undercover specialist called – sigh – Twink. Maryweather spouts eye-rollingly bad dialogue like, “I look forward to serving my country with all of my big gay heart,” while his bigoted boss is just as crude, saying that Q-Force can’t be given real missions because, “What if someone sprains their pronoun?”

This sets up a dynamic whereby the members of Q-Force seek validation from the very system that is marginalising and rejecting them, which, as any psychologist will tell you, simply isn’t healthy. It’s also politically dubious – why would any group of people who have been pushed to the fringes and had their rights systematically violated by an institution want to prove themselves within that institution? The American Intelligence Agency treats Q-Force much like an abusive spouse, but Twink and the rest just keep coming back for more.

This is partly due to a string of queer-friendly settings, such as in the opening episode where the team go on a counter-terror op in a gay bar, or several episodes in, where they have to infiltrate the Eurovision Song Contest. The series finale is even set at a massive pride festival.

Despite this, the storyline makes no sense at all. The director of the intelligence agency, Dirk Chunley, is openly queerphobic, even sending a macho tough guy agent to oversee Q-Force, telling him to “Go babysit the sodomites.” Why would someone with such obvious prejudice employ a special team composed of a gay Captain America and a litany of sidekicks with ambiguous identities?

The result of this gaping plot hole, confused politics, and a lot of bad screenwriting is a cartoon that is simultaneously preachy and anachronistic, as though the writers lifted most of their ideas from Tumblr memes from 2009. Furthermore, its progressive credentials are undermined by the fact that every single character in the show is white, except for the aforementioned big black lesbian mechanic. The only non-white voice in the story is the most hackneyed of all.

More importantly, Q-Force is capitalising on a trend that is playing out in both popular culture and mainstream politics, whereby the security state and authoritarian government policies are being rebranded using progressive symbolism. Put simply, the show queerwashes the CIA, MI6, and the other alphabet agencies by making it seems like LGBTQ+ people should support, seek security from, or even work for these institutions, even if they are treated like dirt.

We have seen this trend play out in all the discussion about the possibility of a female, black, gay or trans James Bond to replace the current Daniel Craig incarnation. Much of the pressure to revamp the Bond character has come from advocates and activists, but this thinking is utterly misguided. Bond was always designed as a propaganda icon for the post-colonial era, based on the archetype of the British adventure man, socking it to the natives. He is the standard government-issue psychopath, serial killing his way to democracy and freedom around the world.

So why would black or brown people want to be James Bond? They are portrayed horribly in the original novels, with endless remarks about how they smell strange and descriptions fixating on their bodies. Even the recent film adaptations maintain the very white, straight, upper-class English values of the source material.

Likewise, how does depicting a sexually aggressive lesbian killing North Korean security guards with impunity do anything to further gay rights, or challenge underlying stereotypes and prejudices about gay women? If anything, much like the character in Q-Force, it would simply reinforce them.

This isn’t just a cultural phenomenon, as the CIA has also jumped on the bandwagon to try to launder its reputation for being an agency that specialises in torture and drone strikes. It still specialises in those things, of course, but now it puts up rainbow pictures on social media during pride month, so it can’t be that bad, right?

For example, around 2017, they invited comic book writer Brian Bendis to their headquarters in Langley. A couple of years later, Bendis explained in an interview, “I got to speak there a couple of years ago about a world that’s different now. They were worried about the diversity issues they were having, and Marvel was thriving with that, so we asked what we could do. They had me… come and talk about different perspectives. And yes, they had the white guy come down to talk about diversity, but I am Jewish.”

The Agency followed this up by attaching themselves to the hype around Black Panther, Marvel’s first predominantly black superhero movie. They posted articles on their website comparing the CIA’s tech to that shown in the film, and tweeted out their support for Black Panther when it was nominated at the Oscars.

Similarly, President Biden has been widely praised for assembling the most diverse national security setup ever seen in the US, with DefenseNews reporting, “The Biden administration says 54% of its national security nominees – to the Pentagon, State Department and U.S. Agency for International Development – are women, 40% are people of color, and at least 7% identify as LGBTQ. At the Pentagon alone, 55% of political appointees are women, about 46% are people of color and more than 10% identify as LGBTQ.”

The United Colors of American Exceptionalism.

Perhaps unsurprisingly, this diverse team are doing nothing to dismantle the drone program, shut down Guantanamo Bay, reduce the military budget, reign in mass surveillance or put a full stop on the story of the forever wars. Let alone ending things like the 1033 program, which sees billions of dollars in surplus military equipment handed over to domestic police departments.

As such, Q-Force’s release has been well-timed, catching the crest of the wave of rebranding the same old neurotic, cruel, hostile practices via the hazy concept of diversity. The series depicts our characters killing, invading people’s privacy, lying, cheating, and stealing, but it’s all alright, because they’re LGBTQ. If the government is going to hack into your emails and read your private correspondence with your loved ones, isn’t it reassuring to know that they might employ a lesbian immigrant to do it?

So, if you like your animated spy shows light on jokes but heavy on identitarian snark, such as, “Straight men are just lesbians with longer cargo shorts, fewer skills and evil in their hearts,” then Q-Force is the show for you. However, if you’ve tired of being told that state crimes are OK as long as they are ordered or committed by a diverse team that represents the whole of America, then I suggest treating this show like the cultural gonorrhoea that it surely is and steering well clear.