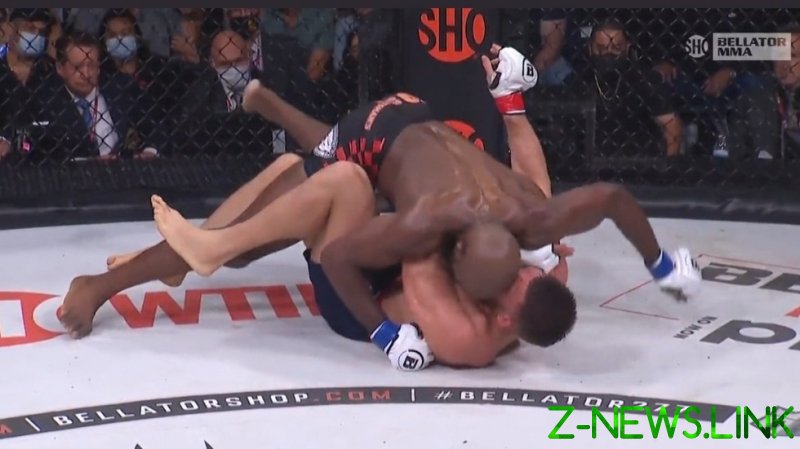 The MMA world was left disappointed after Vadim Nemkov’s Light Heavyweight Grand Prix final against Corey Anderson at Bellator 277 ended in a no contest.

A clash of heads in the third round while both men were grappling on the octagon floor opened a cut above Nemkov’s left eye, which then caused referee Frank Trigg to step in and deliver the verdict amid what commentators described as “mass confusion” at the SAP Center in San Jose.

“Ain’t nobody’s fault,” challenger Anderson told his foe and the Russian’s corner after what he described as a “good fight”.

In its first round, title holder Nemkov had outstruck the challenger but Anderson, who parted ways with the UFC in 2020 after losing to Jan Blachowicz, increased the pressure in the following second and third rounds.

Some felt that the American had the momentum of the clash in the third round when he landed a combination on Nemkov that saw him take the champion down.

And while Nemkov did well to evade any serious damage and almost delivered a guillotine choke submission that its recipient wriggled out of, Anderson took control of the ground game battle and landed an elbow on Nemkov followed by the accidental headbutt that led to the no contest ruling.

As a consequence, Nemkov retained the light heavyweight strap that he has held since August 2020 when knocking out Ryan Bader, and Bellator’s Light Heavyweight Grand Prix was left without a true winner with its $1 million prize money still unclaimed.

On social media, pundits and fans lamented the outcome. “Nobody wanted the tournament to end like that,” said a journalist as a punter called it the “sh*ttiest ever ending” to a fight.

“Corey Anderson was looking like he’d seized the momentum from the second onward. That said, I’m sure Nemkov is sick too,” the reporter added.

Anderson was dubbed a “real man” and a “solid dude” for owning up to the accidental headbutt and showing Nemkov respect, and others preferred to look on the bright side of things.

“Short term: this sucks and is unsatisfying,” said another. “Long term: Nemkov-Anderson II is gonna be high stakes, essential viewing,” it was concluded, in a nod to a potential Grand Prix Final rematch.

Controversy was found elsewhere on the Bellator 277 card and in its main event between two fighters who many find to be among the best featherweights of all time.

Recently crowned both the division’s champion and Bellator’s pound-for-pound number one, A.J. McKee lost in his maiden defense of the featherweight crown he won in a separate Grand Prix Final when Patricio Pitbull beat him by a unanimous decision (49–46, 48–47, 48–47).

Opinion was divided by the result. Though McKee in particular was visibly shocked, many felt he didn’t turn up until the fourth and fifth rounds meaning he lost the opening three.

“In [our first fight], I came in peace,” Pitbull said in reference to their initial meeting, which McKee won via a guillotine choke. “Today, I came for war, and I bring the belt home.”