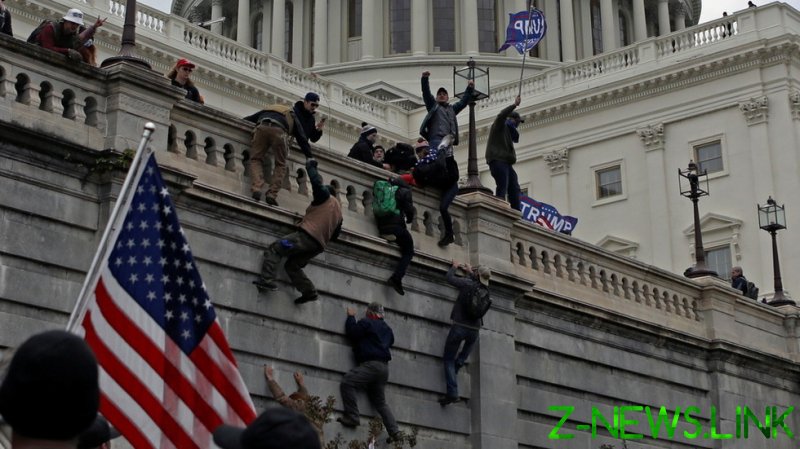 The messages described by the New York Times on Saturday cover months of cooperation between the unidentified informant and the FBI, prior to the dramatic events in Washington, DC, as well as during and after them. The newspaper obtained them on condition they would not be directly cited.

It claimed that the confidential records contradict the FBI case against some members of Proud Boys, who have been charged with conspiracy to break into the Capitol building and disrupt the transfer of power in the US. But the Times also says they undermine the “misinformation” on the agency’s role in the riot – that is, a theory popular among right-wing groups that accuses the FBI itself of instigating the riot for political purposes.

The claim that the FBI orchestrated the events sprang to popularity in right-wing circles after Proud Boys leader Enrique Tarrio was revealed to be a former informant for the agency. He skipped the January 6 protest in the US Capitol after a judge barred him from attending as a condition of his release from jail regarding an unrelated prosecution. He was later sentenced to a short prison term in that case, which involved illegal possession of rifle magazines and vandalism of a Black Lives Matter banner.

The informant, whose communications were reviewed by the Times, was affiliated with a Midwest chapter of the Proud Boys and started working with the FBI in July 2020. He did not appear to be in a position close to the group leadership, but he spent much time on January 6 with other Proud Boys, including some who were charged following the attack, the report said.

The messages “dovetail with assertions made by defense lawyers who have argued that… the group did not arrive in Washington with a preset plot to storm the building,” according to the Times. They also “contain no indication that the informant was aware of a possible plot by Proud Boys leaders” to incite the “normies” – regular supporters of former president Donald Trump, who gathered outside the Capitol building.

In building a case that the Proud Boys had planned to launch an assault on January 6, prosecutors have cited evidence like the fact that members had brought protective equipment and radios to Washington. They had also justified violence against “traitors” in private chats. The newly revealed records paint a different picture, however. Rank members were ordered to “maintain a defensive posture” and only engage in violence if attacked by left-wing radicals.

The report doesn’t seem to have convinced right-wing commentators that the FBI wasn’t behind the January 6 violence – if anything, it was taken by many as additional proof.

The past mainstream media mockery of the theories involving the feds, some of which have proven to be true, hasn’t helped to convince the critics either.

A total of 15 members of the Proud Boys were indicted with various crimes related to the January 6 riot. They are some of the most serious allegations among hundreds of cases arising from the Capitol riot.

The dramatic events were painted by Trump opponents as an existential threat to democracy in America, a failed fascist coup, and argued that it warranted a crackdown on “domestic terrorism” with all the strength of the US national security apparatus.