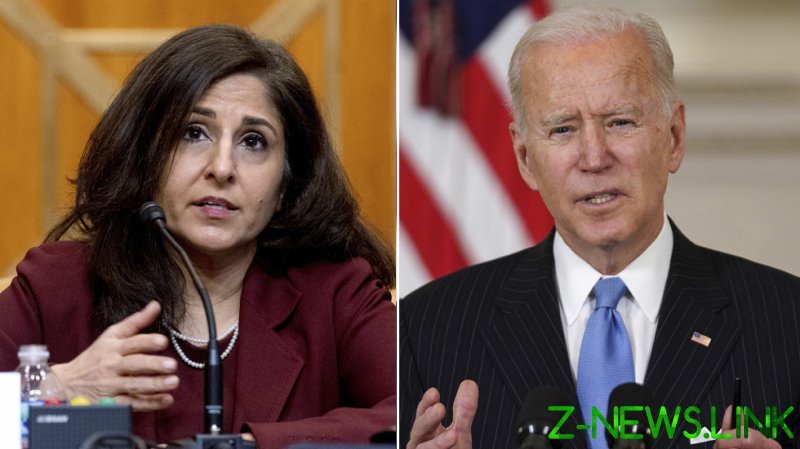 US President Joe Biden buckled under pressure on Tuesday night, pulling Neera Tanden as his nominee to head the Office of Management and Budget. This is not unique, because every president since Bill Clinton has had at least one cabinet nominee shot down. But there are a few things that Tanden’s failed nomination does show.

First of all, it is a uniquely 21st-century problem that did for Tanden. Her aggressive tweets against some sitting senators on both sides of the aisle – many of which she tried to scrub before her confirmation hearing – essentially got her “cancelled” before she could even go up for a vote.

Second, some of the liberal media have been painting Tanden’s fall from grace as a loss for progressives. According to them, the same woman who said that the US should invade Libya and then demand their oil as payment for invading their country is apparently a progressive champion. That is a hilariously stupid take. But if they actually believe it? Well, it shows just how out of touch the media really is.

There was also a conspiracy theory floating around some Democratic Party circles, as noted by Politico late last month. According to this narrative, it was Hillary Clinton, John Podesta and this segment of the Democratic Party that put Tanden forward; Biden obliged, knowing she would fail.

I personally think this interpretation, that there is some kind of ‘Neera-gate’ going on behind the scenes, is gossip that’s probably not true. But it does demonstrate that the incestuous Clinton branch of the Democratic Party has lost virtually all respect among people who are actually in office.

He is the key in interpreting what Tanden’s getting the boot means. The ‘moderate conservative Democrat’, who is crucial to ensuring the Biden agenda gets through because of the even 50-50 partisan split in the Senate, flexed his muscles on the Tanden nomination. He was the one who ultimately decided her fate by pulling his support.

According to Manchin, Tanden’s mean tweets stood in the way of unifying the country and bridging the partisan divide – something Biden promised. But it’s more than that, because he had some skin in the game too.

Tanden actually did something good when she took shots on Twitter at Manchin’s daughter, Heather Bresch, a drug company executive once labeled America’s “new pharmaceutical villain” by the New York Times because she raised the price of the Epi-Pen sixfold and moved her company overseas to dodge taxes. This, of all things, probably cost her the nomination.

And this is probably only the beginning of Manchin’s defiance. It was he who leveraged his crucial tie-breaking vote to undercut several provisions in the Biden stimulus plan that’s meant to be taken to a vote in the Senate shortly.

The senator, who has a ‘very favorable’ rating of just 4% among Americans, pushed to lower the bill’s $15 minimum wage hike and lower the income threshold for the $1,400 stimulus checks, which is the most popular part of the entire bill.

This was a sneaky move by Manchin, because the bill is a must-pass for Democrats. If Congress fails to act, the $300 weekly federal enhanced unemployment benefits will expire on March 14, which means negotiation time is limited and any delay could cause a lapse in income for millions of families. If that happens, it will undoubtedly cost Democrats dearly – perhaps their majority in both houses of Congress – in the midterm elections.

Regardless of a worst case scenario, Manchin is still a political liability for Biden. According to data from FiveThirtyEight, Manchin supported President Trump’s agenda most out of all sitting Democratic Senators who served during that period. He supported Trump’s immigration agenda, which Biden stands in stark contrast to, and voted to confirm most of his cabinet and judicial appointees.

On the other hand, Manchin worked against key parts of the Obama agenda by voting against his energy policies and against the repeal of “Don’t Ask, Don’t Tell”. He didn’t even endorse the Obama-Biden ticket in 2012 and left it open whether he’d vote for them or not.

And speaking of elections, Manchin barely won his last one in 2018 by about 3%. He’s not liked by Republicans, either, because he voted against repealing the Affordable Care Act and against their 2017 tax plan. He’s just an obscure centrist with no serious political outlook at all.

So this is the guy who’s apparently more powerful than the president of the United States, a deeply unpopular middle-of-the-road Washington ghoul who is also a member of the president’s party but apparently shares little in common. This is the outcome of Neera Tanden’s failed nomination.

Yes, she’s awful and shouldn’t have that position. Yes, people should dunk on her on Twitter over this, because she definitely deserves it. But it just shows how much undeserved power Joe Manchin has in the current composition of the Senate.