Home / WORLD / Nearly HALF of Republicans would ditch their party for Trump and only 27% would remain GOP-loyal, poll finds

Nearly HALF of Republicans would ditch their party for Trump and only 27% would remain GOP-loyal, poll finds 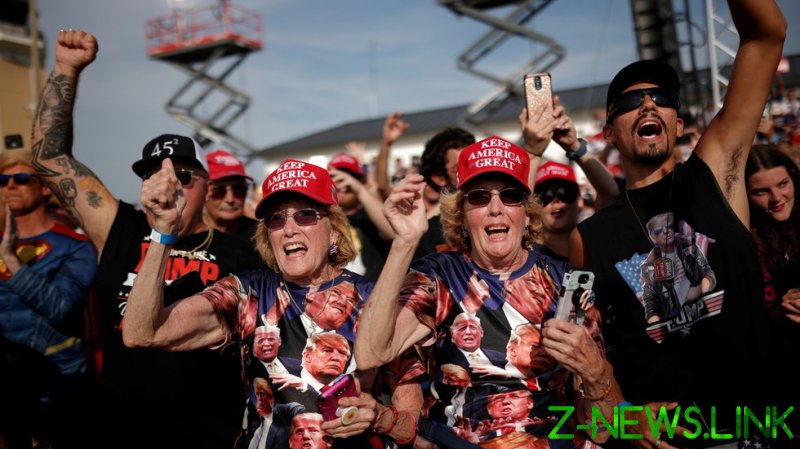 Only 27 percent of Republicans would remain loyal to their party if Trump were to start his own, according to the Suffolk University/USA Today poll, released Sunday.

Almost half –46 percent– would follow the former president, while the remainder indicated they would be undecided between the two.

Trump starting his own political party has been a rumor that has only fueled chaos within the Republican Party amidst questions surrounding the former president’s political future, as well as the recent impeachment trial, which saw seven Republicans side with Democrats and vote in favor of it and former Trump loyalist Mitch McConnell leaving many scratching their heads by holding Trump “responsible” for the January 6 US Capitol riot, despite the Kentucky senator’s vote against impeachment.

“Mitch is a dour, sullen, and unsmiling political hack, and if Republican Senators are going to stay with him, they will not win again,” Trump said, in a statement responding to McConnell.

“We feel like Republicans don’t fight enough for us, and we all see Donald Trump fighting for us as hard as he can, every single day,” Brandon Keidl, a 27-year-old Republican polled, told USA Today.

According to the poll, half of Republicans also believe the Republican Party should be “more loyal to Trump” while less than 20 percent believe it should be less loyal.

Those polled were also asked if they were loyal to Trump and the Republican Party, with Trump as an individual getting more support (54 percent) than the actual political party that nominated him twice (34 percent).

Trump will continue to be involved in the party, at least for the foreseeable future: He will be speaking at the Conservative Political Action Conference (CPAC) in Florida on February 28.

A Politico/Morning Consult poll published earlier this month found Trump to be a frontrunner among Republican candidates ahead of 2024. Over half of Republicans –54 percent– said they would vote for Trump in a primary and even more –59 percent– said they at least want him playing a major role in the party’s future.

The Suffolk University/USA Today Poll was taken among 1,000 Trump voters and has a margin of error of three points.