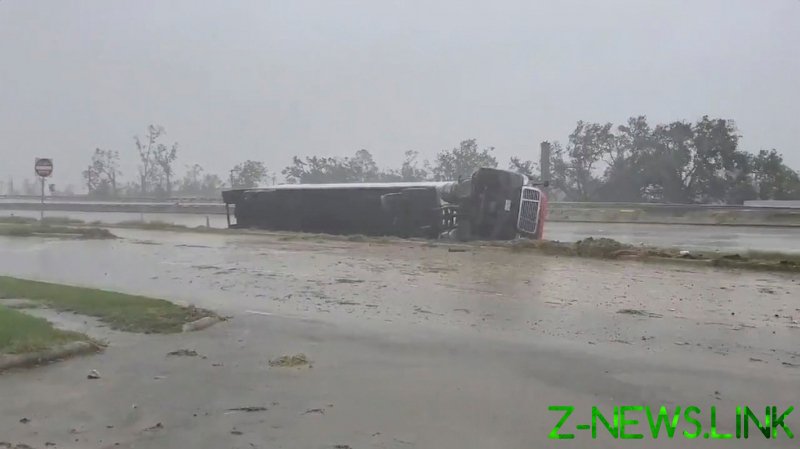 Delta hit land in southwest Louisiana on Friday night, inflicting widespread damage and knocking out electricity for some 379,636 people in the state and another 108,402 in neighboring Texas, according to PowerOutage.us, a project that aggregates data from utility companies around the country.

Footage circulating on social media showed powerful gusts sweeping through the streets of multiple Louisiana cities, including Jennings and Lake Charles, where power lines were also seen downed by the wind.

As the storm surge began to swell ocean tides along the Louisiana coast on Friday evening, flooding could be seen in some areas of the state, including in the town of Delcambre. According to the New Orleans National Weather Service, however, no flash flood warnings are currently in effect.

Though the storm was initially classified a Category 2 hurricane, producing winds up to 100 miles per hour, it was downgraded to a Category 1 soon after making landfall. Delta is expected to continue to lose steam as it moves northeast across Louisiana and will eventually become a tropical storm, according to forecasts from local meteorologists.

The storm comes on the heels of a number of destructive weather systems in recent months, with the Category 4 Hurricane Laura pounding Louisiana and neighboring states in August with winds up to 150 miles per hour, resulting in some 77 deaths in total and more than $14.1 billion in damage. Tropical Storm Beta also hit Texas last month, wreaking destruction across parts of the state’s coast.