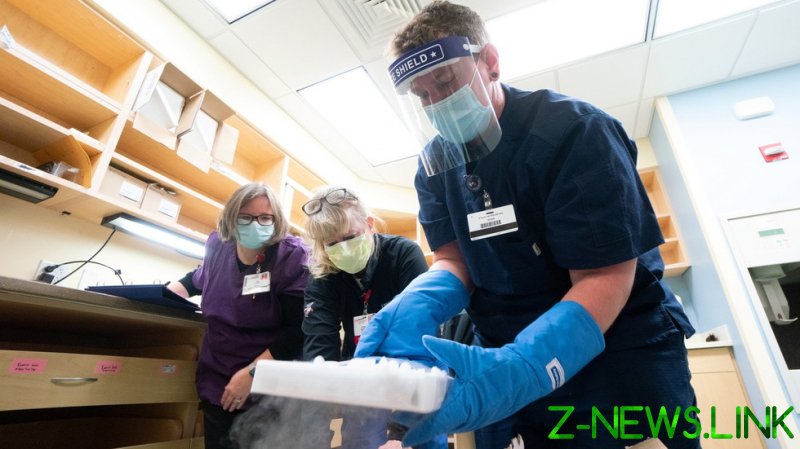 The storage mishap occurred at an Advocate Aurora Health clinic in Grafton, Wisconsin over the weekend, an Aurora spokesperson told a local NBC affiliate, who said the vials had to be discarded due to “human error.”

“We learned that about 50 vials of Moderna vaccine were inadvertently removed from a pharmacy refrigerator overnight,” the spokesperson said, adding “We are clearly disappointed and regret this happened.”

Each vial contained 10 doses of the immunization.

The spokesperson noted that while some of the vaccine was given to clinic staff on Saturday, while still within the vaccine’s “approved 12-hour post-refrigeration window,” they said “most” of the 500 doses had to be discarded “due to the temperature storage requirements necessary to maintain its viability.”

Though Moderna’s inoculation does not require the same extreme sub-zero storage temperatures as the Pfizer-BioNTech vaccine, the jab still must be kept at low temperatures, between -13 and 5 degrees Fahrenheit (between -25 and -15 Celsius), according to FDA guidelines – similar to Russia’s Sputnik V. Once unthawed, doses may be refrigerated at higher temperatures for up to 30 days, but vials cannot be refrozen.

Similar complications have cropped up for the Pfizer-BioNTech jab in Germany, with clinics across Bavaria forced to suspend vaccinations on Sunday, less than a full day into the country’s mass vaccine drive, after problems were detected with its cold storage chain. While BioNTech said the doses were “probably okay” for administration, according to a local official, clinics in nine Bavarian districts ultimately rejected some 1,000 shots, citing concerns over their effectiveness and safety. The pharma firm oversees transportation to cold storage distribution hubs in Germany, but local authorities are responsible for bringing the doses to individual vaccination centers.

Wisconsin has recorded some 510,000 coronavirus infections and just over 5,000 fatalities since its outbreak began, according to data collected by Johns Hopkins University. To date, state health officials say more than 100,000 doses of the Moderna vaccine and nearly 85,000 doses of the Pfizer shot have been distributed so far, with some 10,300 already administered.